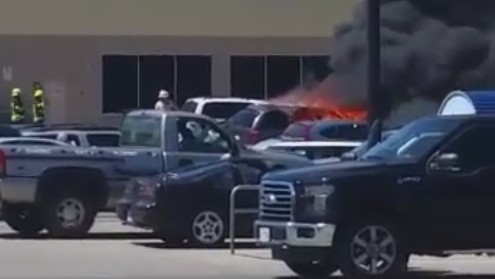 A screenshot from viewer video of a car that caught fire in Smiths Falls on Wednesday, July 5, 2017. A dog inside the car died in the fire. (Lisa Pinel/Facebook)

SMITHS FALLS, Ont. -- The death of a dog locked in a car that caught fire has prompted Ontario's animal welfare agency to issue a warning about the dangers of leaving pets unattended in vehicles.

Normand Beauchamp, who is fire chief in Smiths Falls, Ont., says the incident happened around 2 p.m. on Wednesday when a small dog was left in a running car at a Walmart parking lot.

He says the owner told firefighters they wanted to keep the dog cool, which is why they left the air conditioning running.

But Beauchamp says the car caught fire and the dog had nowhere to go and died.

Alison Cross of the Ontario Society for the Prevention of Cruelty to Animals says many things could go wrong if you leave pets unattended in vehicles.

She says if you can't take your pets with you, then leave them at home.