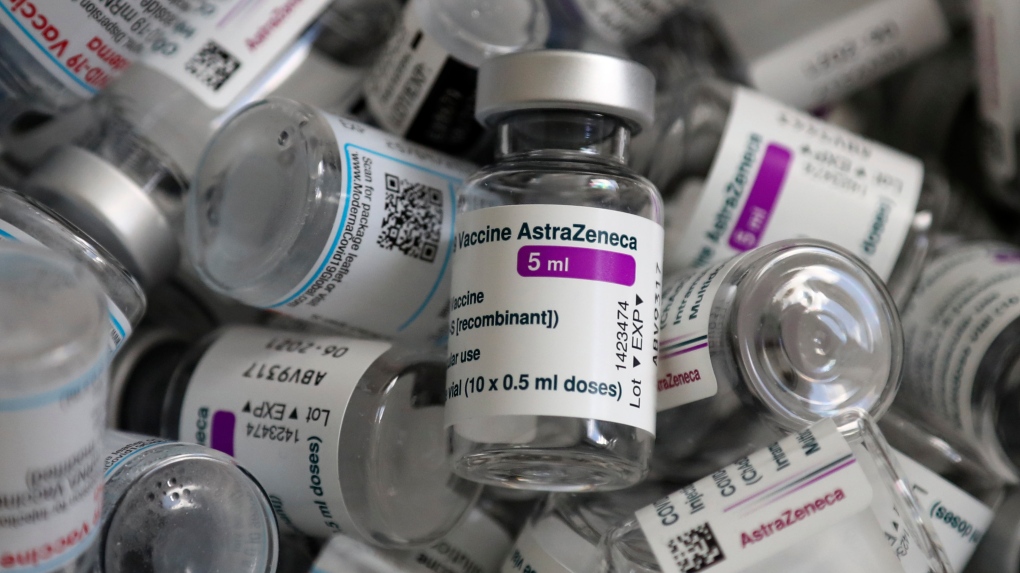 Empty vials of the AstraZeneca COVID-19 vaccine lie in a box during a vaccine campaign at the Vaccine Village in Ebersberg near Munich, Germany, Saturday, May 15, 2021. (AP Photo/Matthias Schrader)

OTTAWA -- The Ontario government is shipping more doses of the AstraZeneca COVID-19 vaccine to Ottawa.

Health Minister Christine Elliott's office told CTV News Ottawa that 1,700 new doses will be sent to primary care clinics in the coming days, on top of 8,700 doses they say were already shipped to pharmacies.

This is a one-time shipment, as the province has not confirmed any future shipments of the AstraZeneca vaccine from the federal government, a spokesperson said.

According to data from Ottawa Public Health, 67,017 residents of Ottawa have received at least one dose of the AstraZeneca vaccine and 2,530 had received two.

Following Ontario's pause on giving AstraZeneca doses as first shots, due to a risk of rare but severe blood clots, the availability of second doses was limited.

The province shipped its expiring stock to Kingston, Toronto, and Windsor, where the pharmacy vaccination pilot project was held in March, in order to give second doses to residents who received their first shot in those three areas. OPH data say 7,886 residents of Ottawa received their first dose of AstraZeneca outside of the city.

You can find a list of participating pharmacies online, though none in Ottawa are currently offering second doses of AstraZeneca at this time.

A previous version of this article suggested the shipment to pharmacies was yet to arrive, but provincial officials say it has already been delivered.

Three new cases of COVID-19 in Ottawa on Tuesday