KINGSTON, ONT. -- Ontario Provincial Police hope a new facial reconstruction of a man whose remains were found west of Kingston more than 30 years ago will help solve his murder.

OPP, along with the Ontario Forensic Pathology Service and Office of the Chief Coroner, released a detailed three-dimensional model of what the man looked like at a news conference on Thursday.

The man’s body was found in October 1989 in a ditch next to County Road 14 in Stone Mills Township, Ont., which is near the village of Enterprise. Police say they hope the new facial reconstruction will help someone identify him.

“We want to give this man back his name and his identity back,” said OPP Det. Insp. Serge Acay. “This is somebody’s son, brother, father perhaps. We don’t know. He has family somewhere.”

The man was found bound and gagged. Police estimate his body may have been in the ditch for about two weeks, during which his facial features decomposed. They say all their investigate efforts to date have not been able identify him.

Recent forensic analysis shows he was a south Asian man between 35 and 55 years old. Forensic artist Const. Duncan Way spent hours shaping the clay reconstruction, right down to the clothes he was wearing when found.

Police say he was wearing a white short-sleeved dress shirt, a red and blue pullover, a sweater with a red, black and grey diamond pattern, grey socks with blue and red stripes, and black loafers.

He was also wearing what police describe as an ‘evil eye’ pendant attached to a gold chain by a safety pin. 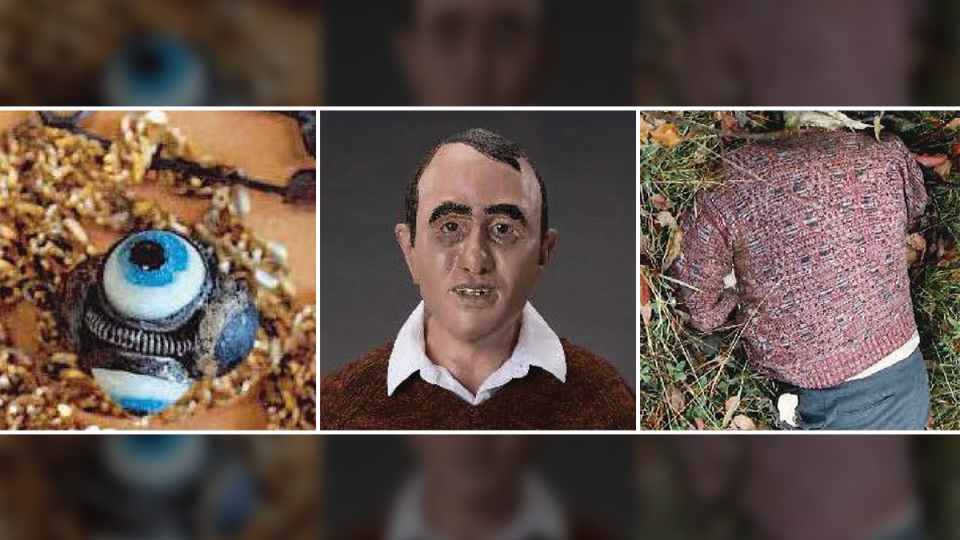 "We don't know what happened to him, where he came from, where he was before," Acay said. "Somebody—one person or persons—did this to him, and we want to hold these people, or person, responsible."

Police are offering a $50,000 reward for information leading to the arrest and conviction of the person responsible for the man's death.