Mooney’s Bay Park closing at 9 p.m. this weekend as police step up patrols 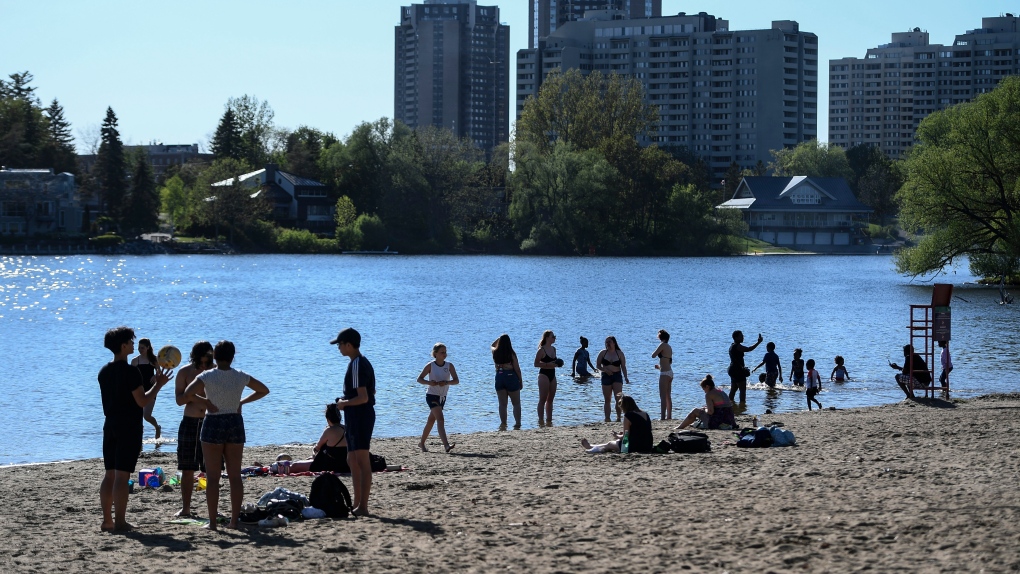 People practice physical distancing as they enjoy the warm weather at Mooney's Bay Beach in Ottawa, on Saturday, May 23, 2020, in the midst of the COVID-19 pandemic. THE CANADIAN PRESS/Justin Tang

OTTAWA -- A popular Ottawa park will be closed at night this weekend as officials plan to step up enforcement of COVID-19 gathering rules.

Coun. Riley Brockington says Mooney's Bay Park will close at 9 p.m. Friday and Saturday, "as part of a city initiative to address a number of issues in the park late at night."

Brockington says this will occur for two weekends and will be assessed before a decision is made by city staff on summer hours.

Mooney's Bay Park will close at 9pm tonight and Saturday night, as part of a City initiative to address a number of issues in the park late at night.
This will occur for two consecutive weekends and will be assessed before a decision on summer hours is made.

In a letter to city manager Steve Kanellakos this week, Brockington said large crowds have continued to gather at Mooney's Bay along the Rideau River this spring.

Brockington told Newstalk 580 CFRA's Ottawa Now with Kristy Cameron that he wants the park to be used, but there are issues that need to be addressed.

"They've been advertising on social media, I think that's how they've been drawing such large crowds," said Brockington.

"I'm not opposed to music and people having fun, but the park currently closes now at 11 (p.m.) and there are literally hundreds, if not more, people have been gathering there. People live across the bay, on the Carleton Heights side, I can hear this loud."

The news of the 9 p.m. park closure at Mooney's Bay comes as Ottawa police vow to take a “zero tolerance approach” to disorderly behaviour across the capital. As of Friday, outdoor gatherings of up to 10 people and outdoor dining are allowed under Ontario’s reopening plan.

Police and bylaw officers will be stepping up patrols in the ByWard Market, beaches and parks this weekend.

Police say there will be an increased police presence in the ByWard Market and Downtown Rideau areas starting Friday evening, as well as at beaches and parks.

"Officers will take a zero tolerance approach to disorderly behaviours, such as Liquor Licence Act offences and criminal activity that can negatively impact residents, visitors and businesses," said police in a statement.

"Police will also assist city Bylaw officers in ensuring the overall respect of the Step 1 restrictions announced in the framework of the Reopening Ontario after COVID-19."

Ottawa Bylaw is reminding patrons that people standing in line outside an establishment while waiting for a table must maintain a two metre physical distance from anyone outside your household, or wear a mask.