With warmer weather arriving and boating season beginning, river safety is a top priority for one non-profit organization along the St. Lawrence River.

The Thousand Islands Association (TIA) has been around since 1934, and members take great pride in keeping boaters safe every year by marking shoals in the river between Brockville and Kingston.

"Everybody thinks that the shoal markers are put out by a government agency like the Coast Guard or something, but no, this is a volunteer association and they put them out," said David Tolton, one of the hundreds of TIA volunteers.

"As they say, there are a thousand islands, but there's just as many shoals, and today we are putting out shoal markers," Tolton said with a smile.

A loaned dive boat commandeered by Vincent Dokis sits in front of the Brockville Yacht Club, where Tolton and another TIA volunteer, Jim Bracken, load 16 shoal markers with their accompanying chains and weights onto the boat. 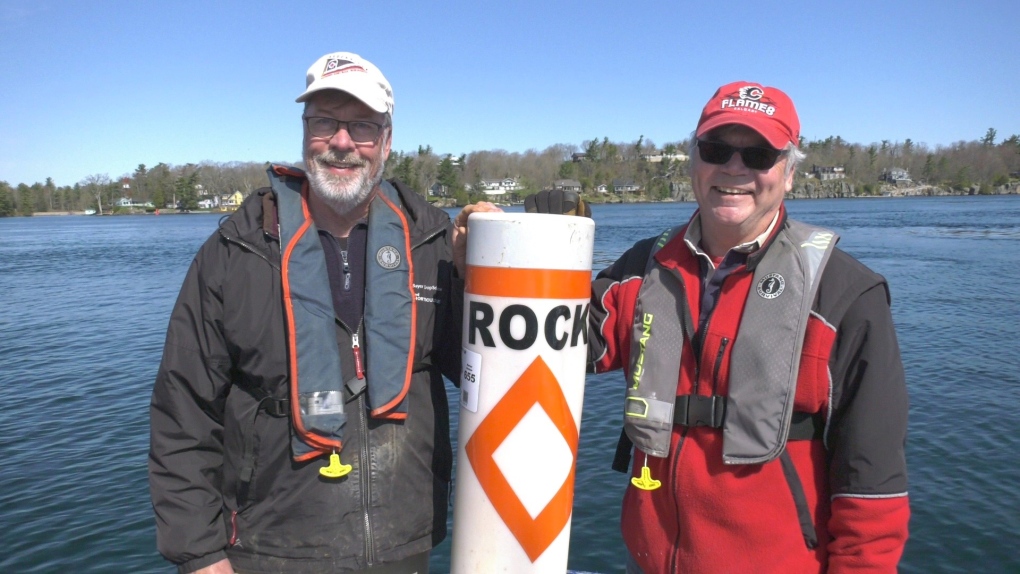 David Tolton (left) and Jim Bracken stand beside one of the shoal markers for the St. Lawrence River. (Nate Vandermeer/CTV News Ottawa)

"They haven't gotten any lighter," quipped Bracken, carrying one of the markers.

Once loaded, the team heads west down the river towards the Long Beach area where the first shoal will be marked.

"We know where all the shoals are, we've been doing this for a long, long time so we just motor up slowly and drop them in," Tolton said.

"It's pretty easy this time of year because we are dropping them, we are not picking them up, so they are fairly clean, they are not stuck or anything on the bottom," he added. "So we just drop them in, make sure they are in the right spot and then we go and do the next one."

Shoals in the river are basically "a big rock" exclaimed Tolton, sitting sometimes inches or a couple feet under the water.

"They are hit all the time and if the boat's going quickly it can take out your lower unit" he said. "Sailboats are a little more sensitive because they have keels so they need to be especially aware of them. They can do a tremendous amount of damage."

"I know it's a great service because we talk to boaters all the time and they say, 'Oh you guys are the ones that put those markers out? Well I'm really glad you're doing it because you saved my butt a few times,'" Tolton laughed.

The organization oversees the placement, maintenance and removal of almost 200 shoal markers on the Canadian side of the river every year. 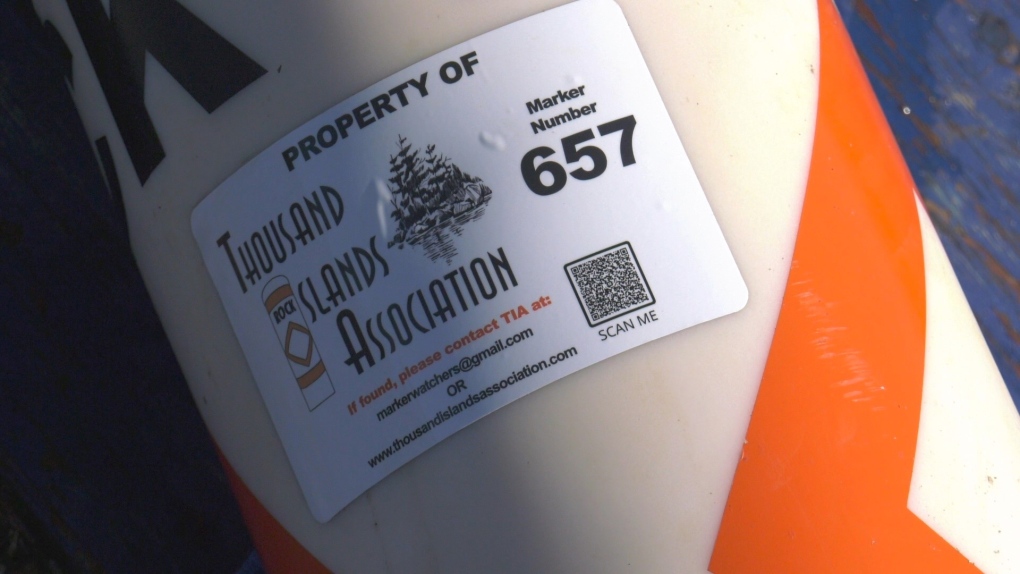 Each shoal marker in the St. Lawrence River has an identifying sticker. (Nate Vandermeer/CTV News Ottawa)

The TIA also has members in the United States which look after and maintain shoal markers in American waters.

While the three men know all the spots the markers should be placed, they also use a GPS for guidance.

"This is actually showing me where the rock markers were located last year and previous years, and we can then come in on to make sure they are properly marked," Dokin said, looking at a small GPS screen while guiding the crew.

"There are parts of the river we don't normally travel or traverse over, so I have the GPS available if I get into areas where I'm not familiar with that section of the river. It's a big river to try and navigate through!" he added.

But even with the knowledge of each location, it's not easy work getting the markers in the correct spot.

"We're going to pull this one back on board," Tolten said, pointing to a marker bobbing up and down and getting carried by the current.

"It went into deep water and it was just floating, so we have to get it and bring it back in again so that this anchor is actually on the shoal," he exclaimed.

Each marker costs around $300, funded by donations and memberships that start at $50 per year. 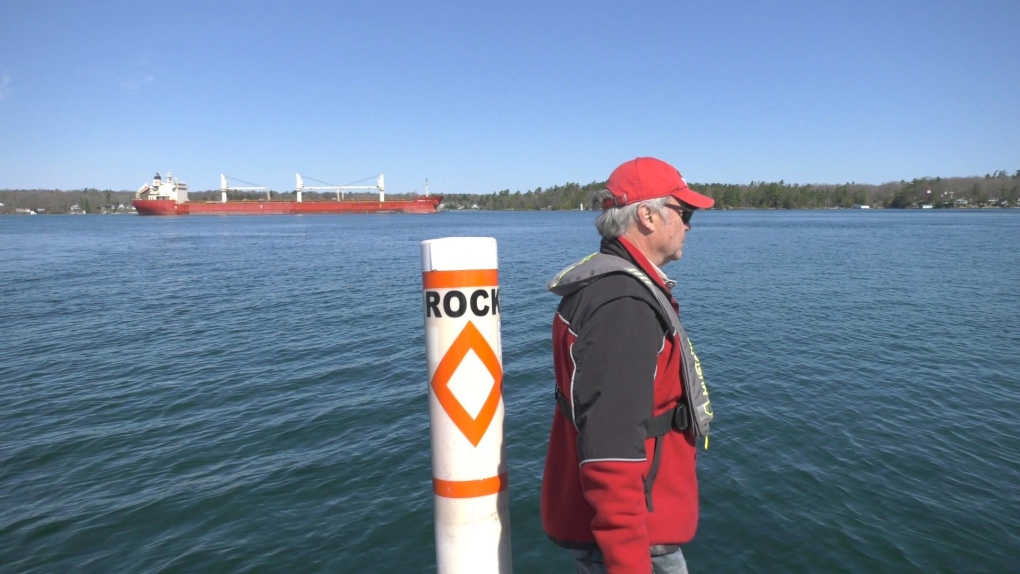 Jim Bracken at a shoal marker in the St. Lawrence River as a ship passes. (Nate Vandermeer/CTV News Ottawa)

"It's great for people to join the TIA to help support the program," Bracken said. "Membership isn't that expensive and it goes towards this program to cover the costs of these markers and the hardware that we need to put them in."

"It's also a great association to keep in touch with what is going on along the river," he added, noting two other programs they offer including environmental awareness and community support.

Stickers can also be seen on each marker stating the organizations name and a QR code, along with an identifier number.

"If somebody finds one floating by and goes and gets it, there is a website you can go on and report it, and because it's got a number we'll know where it came from and then we can go and either take that marker back and put it where it's supposed to be or replace it with a different one," Tolton said.

Tolton noted it takes money and time for the program to keep running, but in the end, it's worth it for boater safety.

"Boating is a big deal especially here in the 1000 Islands and we need to keep boaters safe and this certainly helps that happen," he said.

"It's an important job," added Bracken "It's actually pretty hard work, too, on the old knees but yeah, it's important and we've got it down. Dave's got this so well organized and with help from Vince on this boat makes it a lot easier and a lot quicker."

"Putting them in is a lot easier than taking them out, but it's beautiful to be out on the river," Bracken smiled.

The crew will keep a watchful eye on the markers throughout the season, returning in late October or early November to retrieve them all before the river freezes.

For more information on the Thousand Islands Association, or to join up as a member, visit https://www.thousandislandsassociation.com/.