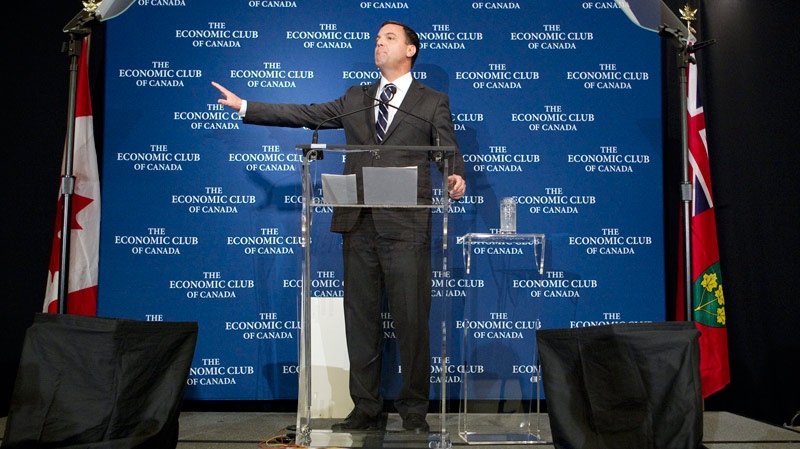 Ontario PC Leader Tim Hudak speaks at a luncheon hosted by The Economic Club of Canada in Toronto on Friday, Sept. 9, 2011. (THE CANADIAN PRESS / Chris Young)

TORONTO - Ontario's Liberals tried Saturday to play down what has become a heated debate over a relatively small immigrant tax credit initiative by dispatching two candidates to talk it up while keeping their leader out of the fray.

The Liberals and Progressive Conservatives have been trading verbal volleys about the proposed program for nearly a week. Tory Leader Tim Hudak derided it as an "affirmative action program to hire foreign workers." The Liberals shot back with an attempt to brand Hudak's position as downright xenophobic.

So on Saturday, with Premier Dalton McGuinty nestled away on a day off from the hustings, and neither Hudak nor NDP Leader Andrea Horwath making any platform news, the Liberals trotted out two incumbents.

The event held in Toronto was ostensibly to announce the program's details, though the information provided departed very little from what had already been reported.

"Today was our opportunity to expand on the commitment, which was really just a sentence-and-a-half in the platform," said Liberal campaign chairman Greg Sorbara.

"We thought it was timely to do this because a lot of questions have arisen."

Businesses could qualify for a credit of up to $10,000 to offset training costs for up to one year for new Canadian citizens who have been here five years or less and are in professions such as architecture, accounting or engineering.

But the Progressive Conservatives say the time it takes to become a Canadian citizen suggests the program could only benefit people in an extremely tight window of opportunity.

Currently, immigrants must have resided in Canada for at least three years before they can even apply for citizenship.

Routine applications -- those that are complete and require no further information or unusual checks -- now take an average of 19 months to process, according to Citizenship and Immigration Canada.

Many applications take much longer.

"Do they really expect anyone to believe that this program is exclusively for people in that five-month window?" Vic Gupta, the Tory candidate for Richmond Hill, said in a statement.

"Today's desperate announcement doesn't fix what's wrong with this policy. It is, and it has always been, unequal and unfair."

Sorbara called the sustained Conservative attacks on the program disheartening.

"The lies and deception and the nonsense that they have raised around this program has been the kind of politics that I just never imagined would enter into this campaign," he said.

NDP Leader Andrea Horwath, also speaking at a campaign event in Toronto, tried to rise above the sparring, as she has done since the campaign began.

"I'm not so focused on the back and forth, who's doing what in terms of the way they're dealing with their platforms," she said.

"It seems like we're still dealing with a lot of debate by press release and I don't think that's a positive thing."