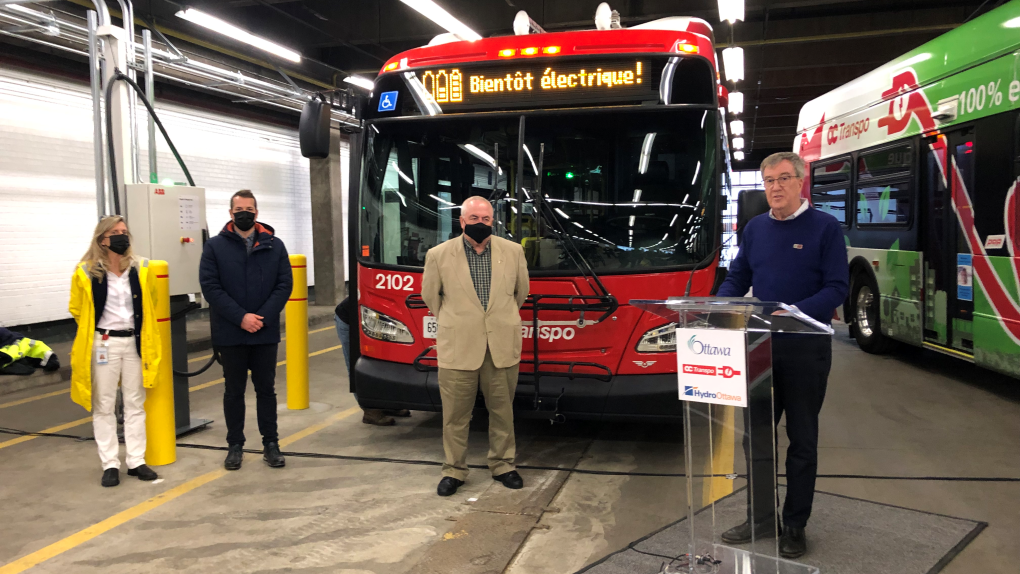 City officials unveiled OC Transpo's first electric bus on Friday. It's the first of four that will start running this year, with the entire fleet transitioning to electric by 2036. (Peter Szperling/CTV News Ottawa)

OTTAWA -- Ottawa residents got their first look Friday at the future of OC Transpo's bus fleet.

Mayor Jim Watson, city councillors and the head of Hydro Ottawa were on hand for the big reveal on Friday.

“With the launch of these four battery-electric buses early next year, OC Transpo will take a critical first step in its conversion to a zero-emission bus fleet,” Watson said.

The garage has been retrofitted with plug-in charging stations for the new buses, which will offer quieter rides. The chargers can fully charge a bus from empty to full in five hours.

"The first thing you notice is how quiet it is," said transit commission chair Coun. Allan Hubley. "The next thing I noticed was: it's almost identical to the existing 40-footers, so that will be advantage for our regular users that have their favourite seat, that kind of thing."

The four buses were originally scheduled to hit the road this year, but the city now says they will enter service in early 2022.