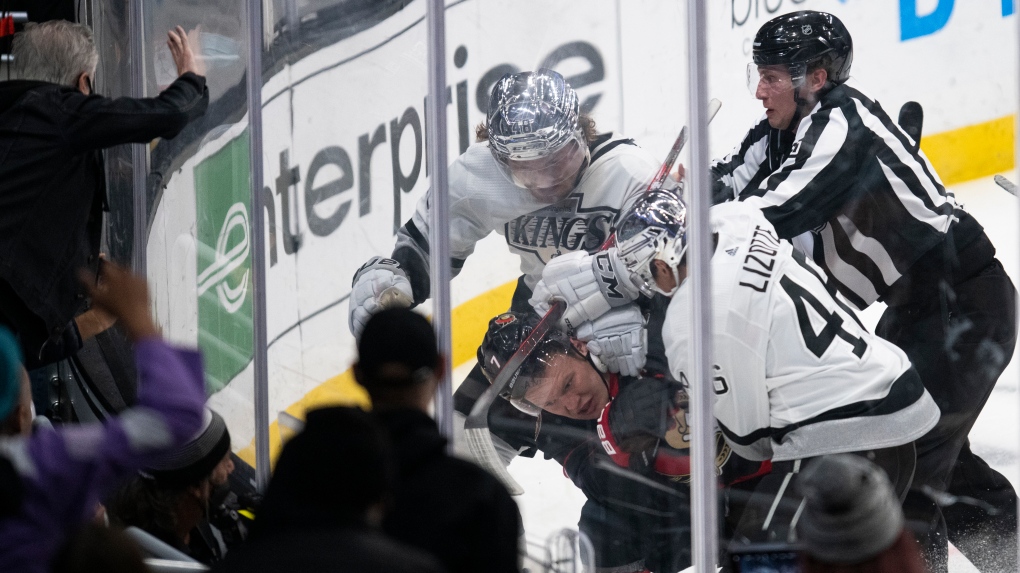 Ottawa Senators captain Brady Tkachuk has accused the L.A. Kings' Brendan Lemieux of biting him during a scuffle in Saturday night's game in Los Angeles.

Tkachuk and Lemieux got into a fight in the third period, at which point Tkachuk said Lemieux bit him on the hand. Lemieux was given a match penalty following the incident.

Speaking to the media following the game, Tkachuk could barely contain his contempt.

"I think it is the most gutless thing somebody could ever do," Tkachuk said. "This guy is just—you could ask any of his teammates, nobody wants to play with him—this guy is a bad guy, bad teammate. Guy's a joke. He shouldn't be in the league. The guy's gutless."

The incident began after Tkachuk shoved Blake Lizotte following a whistle with 6:09 left in the third period. Lemieux came in and he and Tkachuk began fighting, eventually falling to the ice with linesmen attempting to pull the two apart. That's when Tkachuk, showing a bleeding hand to officials, said Lemieux bit him.

"I can't really wrap my head around it. Children don't even do this. This guy's just a bad guy and not even a good player, either," Tkachuk told reporters. "It's outrageous."

"First of all, it's wrong, if it did happen. We don't want it to happen," he said. "And two, it’s not a good situation to put the team in, not only tonight but moving forward."

McLellan said Lemieux has become a valuable player and he needs to understand that.

"If we happen to lose him for any period of time, we'll miss him, and he has to understand how valuable he's become."

The NHL's Department of Player Safety said Lemieux has been offered an in-person hearing via Zoom. The date and time has yet to be announced.

The Kings defeated the Senators 4-2 to snap a five-game skid, while handing the Sens their fifth straight loss.

The Senators host the Vancouver Canucks Wednesday at the Canadian Tire Centre.

--With files from TSN 1200 and The Associated Press.

Queen Elizabeth II made a surprise visit Tuesday to a train station in central London to see a newly completed subway line named in her honour. The 96-year-old monarch, who has reduced most of her public engagements, appeared Tuesday at Paddington Station.

Toronto Maple Leafs winger Mitch Marner was the victim of an armed carjacking outside a movie theatre in Etobicoke on Monday night, multiple sources confirm to CP24.