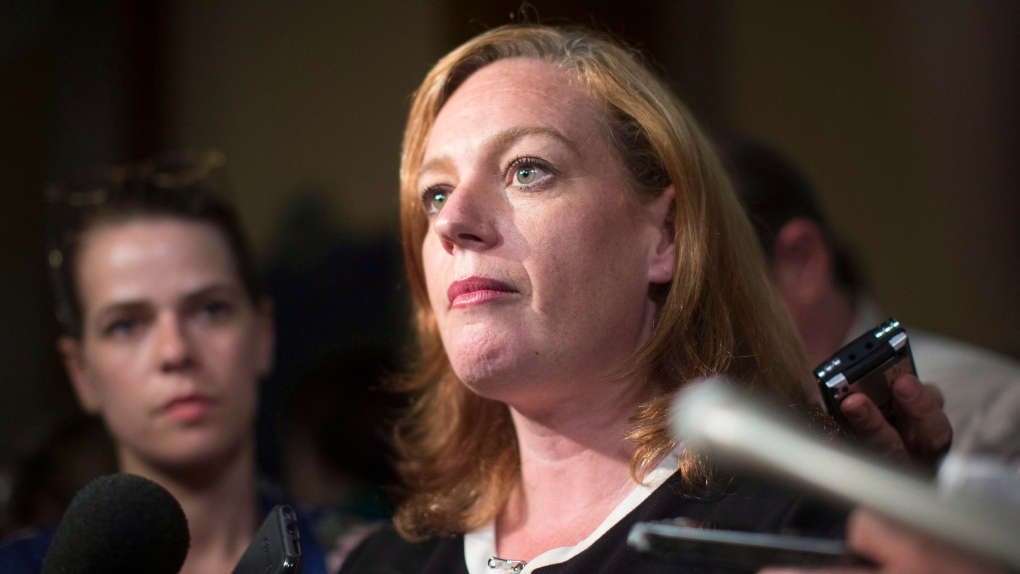 In this file photo, Lisa Macleod, Ontario's Children, Community and Social Services Minister, talks with the media after Question Period at the Ontario Legislature in Toronto on Thursday, August 2, 2018.THE CANADIAN PRESS/Chris Young

WOODBRIDGE, Ont. -- Premier Doug Ford dismissed calls for his social services minister's resignation Thursday after an association of behaviour analysts said she threatened them if they didn't publicly support her new autism program.

Ford said that he hadn't yet spoken with Lisa MacLeod about the allegations made by the Ontario Association for Behaviour Analysis, but had already ruled out asking her to quit cabinet.

"She's an absolute all-star," Ford said after an unrelated announcement. "I would never ever -- I want to repeat that -- ever ask Lisa to resign. She's done an incredible job and let's just make sure it's factual."

MacLeod's office is not denying the group's allegations, instead issuing a statement that despite "collaborative dialogues," the association was "unwavering" in its desire to self-regulate and unwilling to work with the government.

The group disputes that, and says MacLeod and her staff requested a quote of support a few days before the new program was announced.

"(They) indicated that failure to do so would result in 'four long years' for the organization," the association said. "The minister also indicated that if a quote of support was not forthcoming, a communication that behaviour analysts are 'self-interested' would be released from her office."

The association, parents and advocates say the revamped autism program will leave many children without the level of therapy they need.

NDP Leader Andrea Horwath joined parents of children with autism in calling for MacLeod to resign over her alleged comments.

"Lisa MacLeod is supposed to be a voice for children and parents at the cabinet table," Horwath said in a statement. "Instead, she's threatened them."

Ontario Public Service Employees Union president Warren (Smokey) Thomas said he was appalled by reports of MacLeod's actions and called for her to step down.

"I can't tell you how disappointed I am in Lisa MacLeod," he said in a statement. "It's unbelievable she would bully others to pay lip service to Doug Ford's attack on autistic children."

MacLeod announced last week that in order to clear a backlog of 23,000 children waiting for publicly funded autism therapy, families will get up to $140,000 to pay for treatment -- a maximum amount if a child is in treatment from age two to 18. Advocates say intensive therapy can cost up to $80,000 per year.

Critics of the plan slam the fact that it's based on age, rather than individual needs for varying levels of intensity in treatment.

Ford noted that experts say the early years are the most critical for therapy and suggested families could "front load their payments to really focus on those years of critical care."

Ford left the door open to a future "tweak" to the program, but suggested it wouldn't happen while the province tackles a $13.5-billion deficit.

"I've always said in government, the only way you can take care of the most vulnerable people in society, you've got to take care of your balance sheet," he said. "If we had the choice to just put a ton more money in, we would."

Autism is one of the most difficult files anywhere in government, Ford said.

"My heart breaks, it really does, for these families."

Ford himself has previously come under fire from the autism community, when as a Toronto city councillor he reportedly said a home for developmentally disabled youth in his neighbourhood "ruined the community."

"My heart goes out to kids with autism. But no one told me they'd be leaving the house," Ford said at a public meeting, as reported by the Etobicoke Guardian in 2014.

During last year's election campaign Ford called reports of the comments "lies," though at the time he went on TV and defended them.