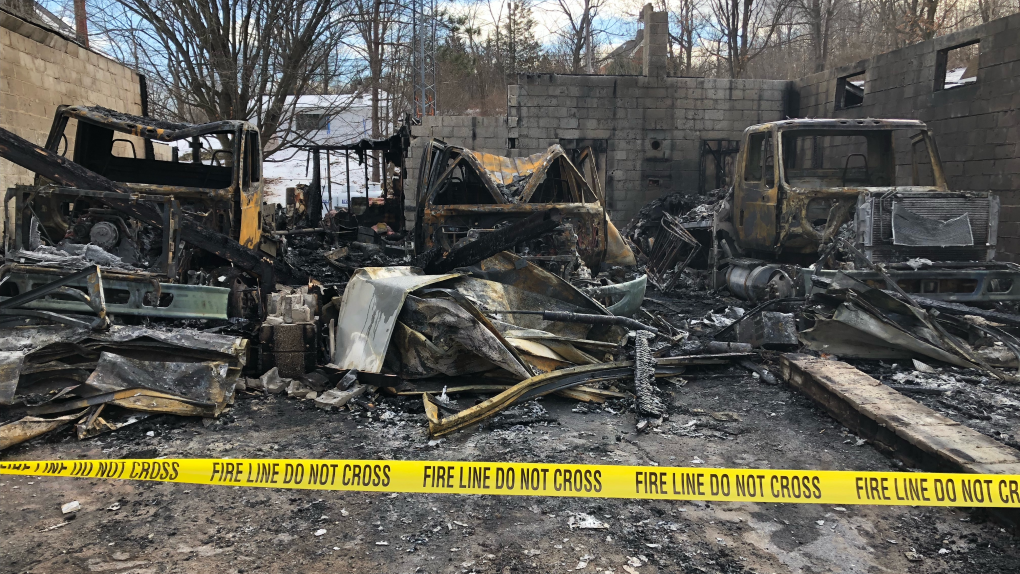 The aftermath of the fire at the Rideau Lakes fire station in Portland, Ont. Dec. 22, 2021. (Nate Vandermeer/CTV News Ottawa)

The massive fire that destroyed the local fire station in the community of Portland, Ont. last month has been deemed non-suspicious.

The Township of Rideau Lakes said in a release Wednesday that while a cause for the massive blaze has yet to be determined, the Ontario Fire Marshal's office has concluded that the origin of the blaze is not criminal in nature.

The investigation into the fire continues and the site remains fenced off.

The fire broke out on the afternoon of Dec. 21 and quickly engulfed the fire hall and its contents, including a tanker truck, a pumper, and a rescue vehicle. Losses were estimated at more than $1.5 million.

The township says it is fully insured for the loss of the fire station and equipment, as well as costs associated to continuation of service while a new facility is built. Any damage to neighbouring properties will be recovered from the township’s insurer through the homeowners’ policies, it said.

Mayor Arie Hoogenboom said in the immediate aftermath of the fire that neighbouring communities have offered fire equipment so there would be no loss of fire coverage in the area.

Further details on next steps are expected to be released on Monday at the Township Municipal Services Committee meeting. It is likely that next steps will include the establishment of a temporary station facility in the sector, the township's release said.

“My priorities are to consider all options with a view to provide a high-quality facility that best serves the interests of the whole community as we look toward the next 50 years,” said Hoogenboom, who vowed to rebuild the fire hall, likely on a new plot of land that can accommodate a modern fire service.

The original fire hall had served the area for more than 50 years.