An eastern Ontario doctor who was charged with first-degree murder in the death of a patient is facing three new murder charges, Ontario Provincial Police have announced.

Brian Nadler, 35, was charged in 2021 in connection with the death of 89-year-old Albert Poindinger, of Pointe-Claire, Que on March 25. Nadler worked at the Hawkesbury and District General Hospital at the time.

Police said they were investigating multiple suspicious deaths at the hospital, but never revealed how many and indicated the investigation would be lengthy.

Nadler's medical licence was suspended shortly after he was charged. He was released on bail in July 2021 with several conditions, including a ban on practicing medicine.

In a news release, OPP said Nadler was arrested and charged Wednesday with three additional counts of first-degree murder.

OPP Acting Sgt. Erin Cranton would not release any details on the investigation into the deaths of the three women.

"The investigation began March 25 in 2021 when officers from the Hawkesbury detachment were called to the Hawkesbury and District General Hospital to investigate deaths that had occurred," Cranton told CTV News.

"These charges relate to the deaths of three patients under his care," Hawkesbury and District General Hospital said in a statement.

"HGH is fully collaborating with the OPP investigation and legal proceedings being initiated. Our immediate concern is for the families of the deceased patients and we are committed to providing them with the appropriate care and support."

Online obituaries show both Lorraine Lalande and Judith Lungulescu passed away at the Hawkesbury General Hospital on March 25, 2021.

Lalande was a mother of four, and had "many grandchildren," according to the obit on the Berthiaume Funeral Home website.

Lungulescu was a long-time resident of Hudson, Que.  She is survived by a daughter and two grandchildren.

Nadler's lawyers said in a statement their client maintains his innocence. 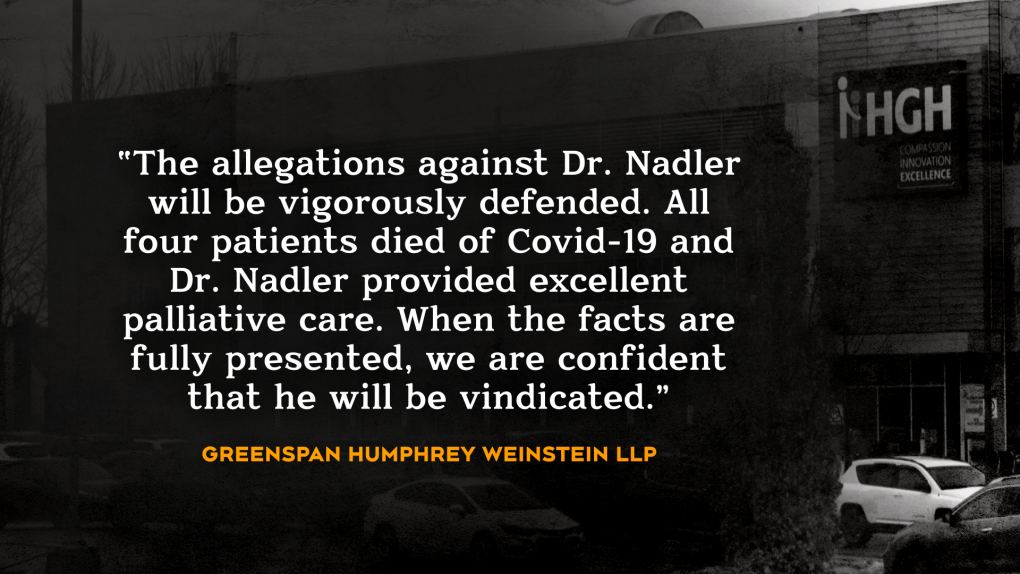 "The allegations against Dr. Nadler will be vigorously defended. All four patients died of Covid-19 and Dr. Nadler provided excellent palliative care. When the facts are fully presented, we are confident that he will be vindicated." - Statement from Greenspan Humphrey Weinstein LLP

"All four patients died of Covid-19 and Dr. Nadler provided excellent palliative care. When the facts are fully presented, we are confident that he will be vindicated."

The lawyers said Nadler was released from custody on consent on the same terms and conditions as his previous release.

"This is a very complex case. In order to conduct a thorough investigation it takes time and the investigation is still ongoing," Cranton said, adding anyone with information should contact the Hawkesbury OPP Detachment.

Ontario woman sexually assaulted by Jacob Hoggard says she is suing him for $2.8M

Videos of protests in Iran leak despite internet bans

Videos of revolts and unrest started to flood the internet when Iranian protestors flocked to the streets in response to the death in custody of Mahsa Amini, a 22-year-old woman allegedly detained for wearing her hijab improperly.

This DIY air purifier costs far less than a HEPA purifier, and studies say it works

This fall, teachers and parents have been sharing photos on social media of do-it-yourself air purifiers that they’ve made for classrooms to help protect kids from COVID-19 — and according to researchers, these low-cost purifiers actually work.

Hockey Quebec says it has lost confidence in Hockey Canada and will not transfer funds to the national organization, while Tim Hortons and Scotiabank have extended sponsorship boycotts.