Colour in a colourless world: A celebrated artist and Vietnam veteran displays his pandemic project in the Gatineau Hills

Colour in a colourless world: A celebrated artist and Vietnam veteran displays his pandemic project in the Gatineau Hills

At the height of the pandemic, Wakefield, Que. artist Al Skaw worried he’d never again display his work in public.

"I thought all the galleries are going to close.  I was so pessimistic about it all. I thought this is the death of culture," said the gifted figurative painter.

"I remember thinking, ‘I’ll never show in a gallery again because it’s a public place.'"

It began as some drawings and a story on social media.  Skaw’s central character was an artist living through a pandemic.

"The pandemic had caused his community to become colourblind," said Skaw.

"The artist becomes the community’s best option to find colour again. He comes to Canada and discovers Tom Thomson, the Group of Seven, and Emily Carr."

That story has evolved into a series of vibrant and animated paintings, now on exhibit at the MacLaren House Art Gallery in Wakefield.  It’s called "Unreliable Narrative".

"I thought that was a better title than, ‘Fake news,'" laughed Skaw.

The paintings depict his subjects in a variety of scenarios in Canada’s wilderness. 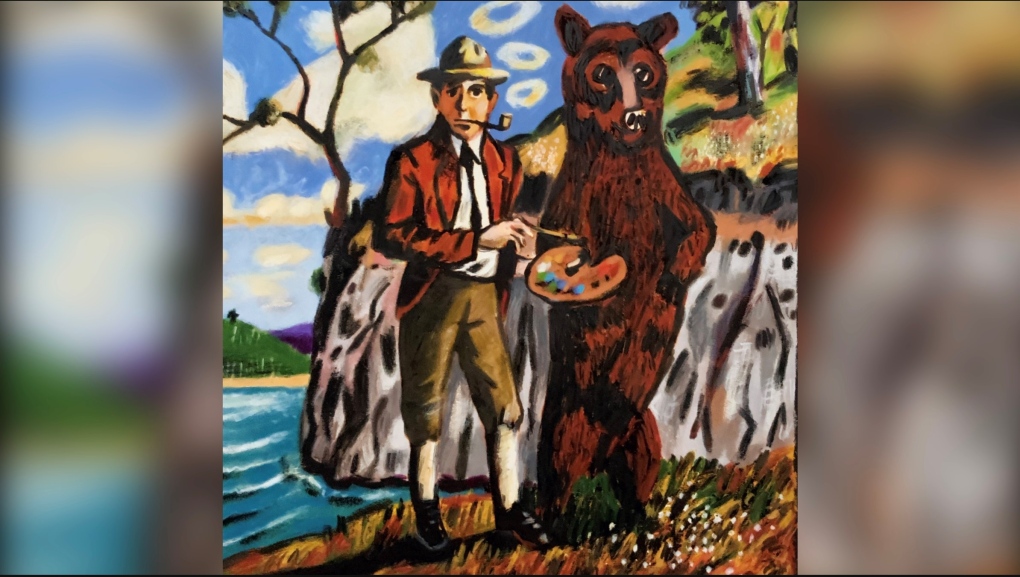 From Al Skaw’s “Unreliable Narrative” Exhibit, painter Tom Thomson is seen in the Canadian wilderness in the company of a bear (Image supplied)

Examples include Thomson painting and paddling with a bear.

Another shows the Group of Seven crowding Thomson’s canoe for a cruise along a rushing river.

And another reveals artist Emily Carr, joining Thomson for a plein-air painting session, while a monkey observes from a tree stump.

The depictions may not be "historically accurate", chuckles Skaw.  But the artist hopes his work gives people something to think and laugh about.

"The stories have made people smile.  And why not smile during a pandemic if you can. There’s so much to be sad about, isn’t there?" the artist said.

"For instance, we know that Tom Thomson felt pride in his country.  Let’s imagine that he might have carried around the Red Ensign while discovering the world around him, or that he might have been reciting Walt Whitman in the bush," he smiled.

"I simply want people to have a sense of raucous joy when they see them," said Skaw. 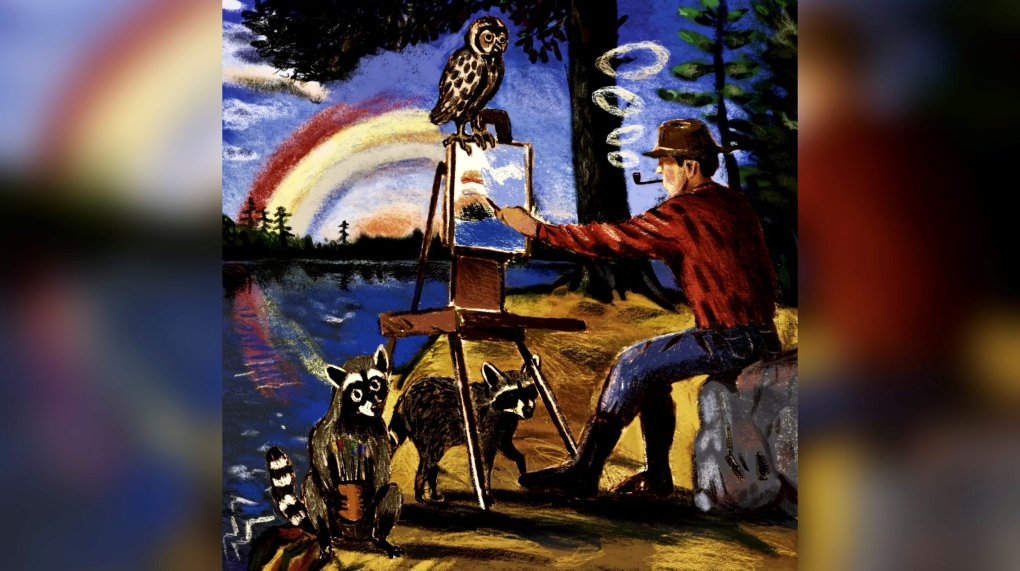 From Al Skaw’s “Unreliable Narrative” Exhibit at the MacLaren House Art Gallery in Wakefield, Quebec. A depiction of a pipe-smoking Tom Thomson doing a plein-air painting in the Canadian wilderness. (Image supplied)

The son of an Austrian mother and an American father in the U.S. military, Skaw has lived all over the world.  He recalls vividly the sensorial splendor of walking into an art studio near his mother’s hometown as a young boy.

"I still distinctly remember the smell of the oil paint in this massive studio. The smell pervaded the entire structure and I became mesmerized by it.  It was an aroma.  It was a way of life," Skaw said with a grin.

It is the life Skaw knew he wanted, despite commentary from his father about the unsuitability of art as a profession.

"My father knew nothing about art. He didn’t encourage it.  He thought art would lead to alcohol and drugs, and wild women and all that stuff.  And he was right. Utterly right.  But that’s what I wanted. That was my goal," laughed Skaw.

But at age 19, life had other plans for Skaw.

Living in Germany with his parents, and registered to attend the Munich campus of the University of Maryland, Skaw received a life-changing letter.

"I received my draft notice from Uncle Sam.  I went to Vietnam with the U.S. Army."

It was not a war in which Skaw, or most of his fellow soldiers, wished to fight.

"Most of us were anti-Vietnam War, much to the chagrin of the older soldiers.  They thought we were traitors, and we were, to that cause, because none of us believed in it."

Skaw witnessed the loss of many soldiers, including close friends.

"I did, yeah. But I don’t know anybody who didn’t. If you went to high school in the States during that time, then you would have lost friends in Vietnam."

"Fifty-eight thousand, mostly young people, died in the war. And how many were wounded both physically and mentally? Probably ten times that many," said Skaw, shaking his head.

Skaw served in Vietnam for a year and then was posted as a serviceman back to Munich where culture was bountiful.  In a city alive with poets and painters, Skaw spent much of his free time in museums and galleries.

Eventually, he moved to Australia, attending art school in Sydney.

"Sydney’s a joy. It is a hedonistic place. It sparkles like a diamond," he said.

A gallery took a shine to Skaw’s paintings. Within a month, they were all sold.  His art career was launched.  He’s been painting ever since. 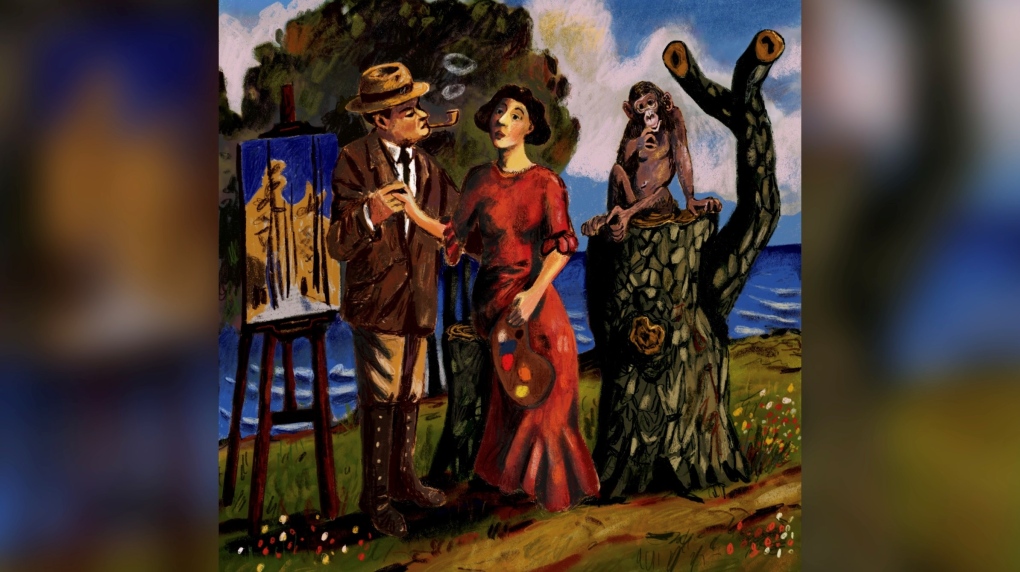 From Al Skaw’s "Unreliable Narrative" Exhibit at the MacLaren House Art Gallery in Wakefield, Quebec. Tom Thomson stands beside Emily Carr; the iconic artists under the watchful eye of a nearby monkey. (Image supplied)

Skaw, who was living in Australia, was visiting Wakefield with his Canadian-born wife, Shelly, when they spotted a 'for sale' sign just outside the village. Soon Canada became their permanent home.

"I walked all around the property, and I said to Shelly, 'Let’s buy this house'. And it was just like that."

"I later discovered my great-grandmother was born very near here, and that was just astounding to me. All of it just suddenly made sense."

Like the protagonist in his pandemic story, Skaw hopes his paintings bring colour to a world that needs it, while affirming the importance of art and culture in our future.

"Art is not simply vocational fun.  It’s a completely serious endeavour.  It tells us who we are as a people. It informs us about ourselves.  And as Wallace Stevens suggests, it should be about us and yet beyond us. It lifts us beyond who we are.  It carries us into the next generation of ourselves."

Al Skaw’s "Unreliable Narrative" exhibition is open from Tuesday to Saturday at the MacLaren House Art Gallery located at 72 Mill Rd. in Wakefield. It runs until mid November.

Newly discovered asteroid makes one of the closest approaches of Earth

An asteroid the size of a box truck made one of the closest passes of planet Earth ever recorded.

The federal privacy watchdog says Home Depot shared details from electronic receipts with Meta, which operates the Facebook social media platform, without the knowledge or consent of customers.

Retain nurses before recruiting nurses from other provinces: association

Efforts to lure nurses from other provinces are underway in several parts of the country, but the head of a national nurses association says the poaching won't solve anything unless working conditions are improved.

Auschwitz-Birkenau survivors and other mourners commemorated the 78th anniversary Friday of the liberation of the Nazi German death camp, some expressing horror that war has again shattered peace in Europe and the lesson of Never Again is being forgotten.