OTTAWA -- The City of Ottawa is urging residents who are trying to book COVID-19 vaccine appointments through the provincial booking system to keep trying despite a spike in demand Monday morning.

Eligibility to book an earlier appointment for a second dose of a COVID-19 vaccine in Ontario expanded to anyone 70 and older, or who received a first dose of a Pfizer-BioNTech or Moderna vaccine on or before April 18, at 8 a.m., but the City of Ottawa said in a memo Monday afternoon that the system became overloaded first thing in the morning.

The heads of Ottawa's vaccination task force said Monday that 27,000 appointments were booked Monday, despite many other residents saying they were met with delays or a lack of available doses.

"Ensuring system functionality is the responsibility of the province, as is the decision to accelerate appointments," said Anthony Di Monte, the general manager of emergency and protective services and medical officer of health Dr. Vera Etches in a joint memo. "Individuals who may have experienced issues this morning are invited to monitor the provincial booking system as new appointments may become available overtime due to cancellations and modified bookings."

In a memo to council last Thursday, Di Monte said the shortened second dose interval for residents 70 and older would add up to 80,000 more people looking for earlier appointments in June, "that are simply not available."

When the portal allowed people 80 and older to book an earlier shot, a glitch in the system made it impossible for anyone to book an appointment in Ottawa for three days.

Mayor Jim Watson says the reduced age limit should come with a corresponding increase in doses.

"It is very frustrating, we continue to not receive our fair share – I've raised this with provincial officials time and time again and we'll push that because Ottawa is the second-largest city, we want to make sure that we're getting our fair share of doses," Watson said on the CTV News at Six on Saturday.

However, Ottawa hospital senior scientist Dr. Doug Manuel says prioritizing the hardest hit areas of the province, largely in the GTA, will help curb the spread of the delta variant.

"We need to move vaccines to the areas where the delta variant has taken hold quickly," he told CTV News Ottawa's Jeremie Charron on Sunday. "If we don’t control those areas we’ll be affected by them as well."

He says the steps taken now will be critical to Ontario's plans for the summer.

"August is looking good, but we can’t miss this one. We have to be as patient as we can to ensure we have a good July and August.”

City still has 7,000 people over 80 to contact for second shots

Di Monte and Etches said in their memo Monday that there were approximately 17,000 residents of Ottawa 80 or older who did not have a planned appointment for a second dose and staff have been reaching out to them to help them book a second shot appointment.

Some residents were able to get first doses through Ottawa Public Health clinics before the provincial system came online. When it first launched, the provincial portal did not allow someone with one dose to book only a second dose appointment.

The memo said staff are still working to reach out to about 7,000 remaining residents who have yet to be contacted about their second dose.

"Of the individuals reached to date, most have indicated that they have already made arrangements for a second dose through another delivery channel," the memo said. "This allowed staff to add capacity in community clinics over the weekend. As we contact the remaining individuals, more appointments could be added to the provincial system."

City staff have suggested that residents can also try to book appointments for their second dose at local pharmacies, but pharmacies are also reporting issues securing enough doses.

"I would say its one of the most hectic periods of my profession," pharmacist and owner of Gabriel Drugs, Heidi Gabriel, told CTV News Ottawa's Dave Charbonneau on Sunday. "My biggest concern is that we are still working on the wait list for people who are looking for the first dose of vaccination." 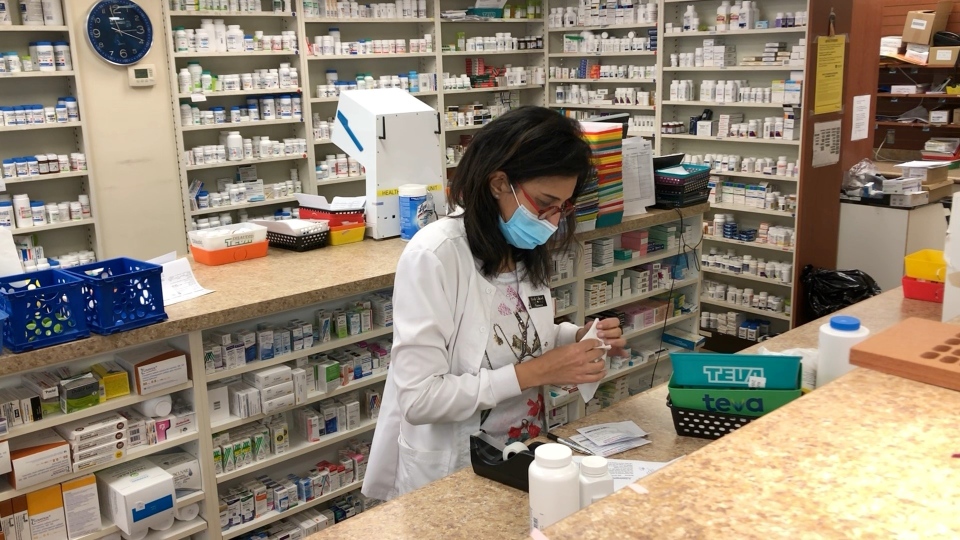 Gabriel says her wait list is close to 1,000 people.

Additionally, the government approved the ability for people who received a first dose of the AstraZeneca vaccine to get a second dose of an mRNA vaccine such as Pfizer or Moderna, which could lead to some competition among people seeking their first doses and those seeking their second.

Only select pharmacies in Kingston, Toronto, and Windsor have received doses of AstraZeneca to give second shots. Ottawa area pharmacies are not expected to receive more AstraZeneca for second doses until the week of June 21.

CEO of the Ontario Pharmacists' Association Justin Bates says shipments from the provincial government need to be increased if people are going to be mixing doses.

"For mRNA vaccines, the pharmacies continue to get weekly shipments of 150 doses for Pfìzer and 100 doses of Moderna," he said. "We need more Pfìzer to keep up with the demand especially if more people elect to mix their second dose with an mRNA vaccine."

The Ontario government says when booking an appointment through the provincial online system, you will be asked for the following information:

At the time of booking, eligible individuals will schedule their first and second vaccination appointments.

Three new cases of COVID-19 in Ottawa on Tuesday