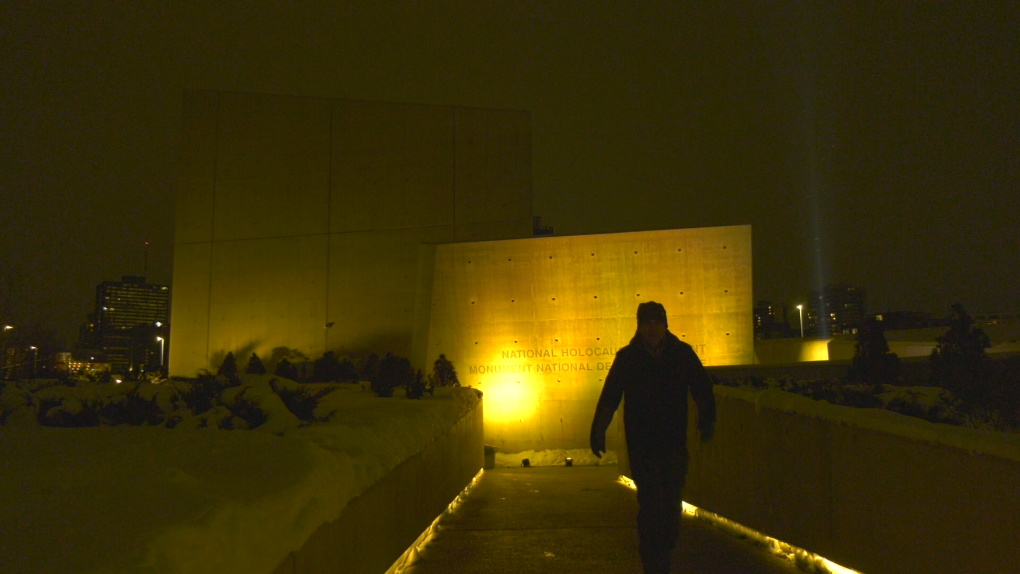 The evening commemorated the six million Jewish victims of the Holocaust and the millions more who suffered under Nazism.

"The brain power that was lost as a contribution to the world- those things cannot happen again," said Dr. Agnes Klein, a child survivor of the Holocaust. "It needs to be a lesson to the world forever."

She addressed the crowd at Thursday night’s ceremony that included members of the Jewish community, national leaders, and Ottawa Mayor Jim Watson. The event was kept small to follow COVID-19 protocols but was live streamed. Those who were present, spoke out against anti-Semitism.

"Today and always we stand united against anti-Semitism and we commit to finding all forms of extremism and we remember," Watson said.

The National Holocaust Monument wasn’t the only landmark lit in yellow. The National Hallery and Ottawa’s postsecondary institutions were also part of the cross-Canada “we remember” initiative. The yellow symbolizing a candle, a light in the darkness.

"Remembering the Holocaust and getting rid of discrimination takes a lot of education and a lot of people remembering," said Klein. "Making sure things like this never happen again."

Leaders in the Jewish community say now more than ever, Holocaust remembrance and anti-Semitism education is important.

"We have to use this as a teachable moment," said Andrea Freemdna, the CEO of the Jewish Federation of Ottawa. "Fighting hatred and injustice and anti-Semitism is all our responsibilities and we have to push back.

“Each of us has the ability to be that light into the darkness."

Police: Texas gunman was inside the school for over an hour

Ray Liotta, the actor known for his roles in 'Field of Dreams' and the Martin Scorcese mob classic 'Goodfellas,' has died.

Ukrainian Prime Minister Denys Shmyhal says the West must not give in to Russian pressure to ease sanctions in order to restart the flow of agricultural exports.

Amber Heard told jurors Thursday that a harassment campaign waged against her by ex-husband Johnny Depp has left her humiliated and scared for her life from multiple death threats, and said she just wants 'Johnny to leave me alone.'