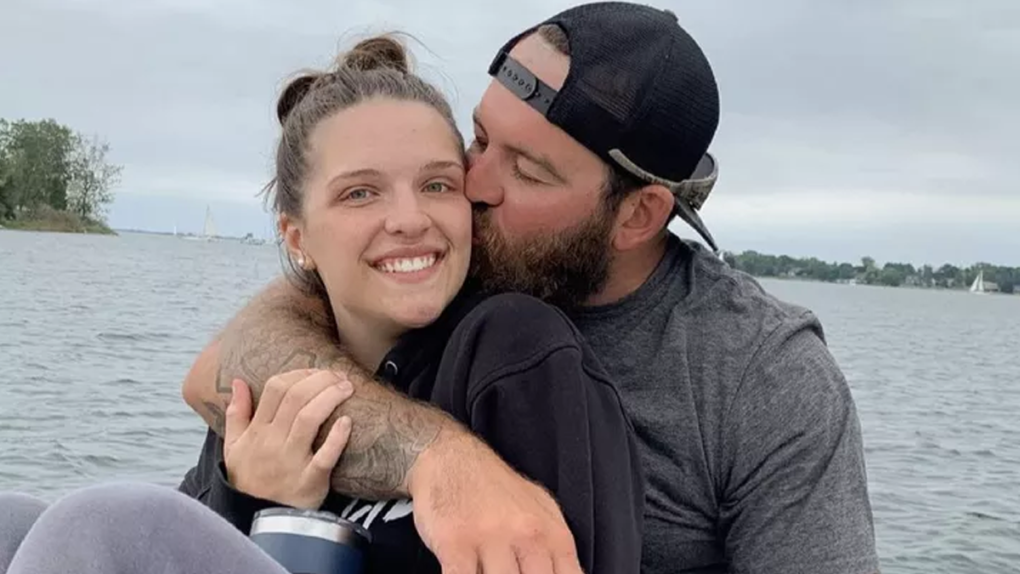 Kyle Robinson was killed in an ATV crash last weekend, while his fiancee Meara Deery was seriously injured. (GoFundMe)

A Brockville, Ont. man was killed and his fiancée was seriously injured in an ATV crash northeast of Huntsville, Ont, one week after they got engaged.

The driver of the ATV was pronounced dead at the scene.

Two GoFundMe pages identified the victim of the crash as Brockville resident Kyle Robinson, while Meara Deery was injured.  The fundraising pages said they had just been engaged on Aug. 6 at Brockville's Ribfest.

"Everyone was on top of the world," the GoFundMe page reads. "Kyle the biggest teddy bear on the planet, got down on one knee and asked our high energy, wears her heart on her sleeve niece, to marry him. She said yes! Both Kyle’s family and Meara’s family were thrilled."

"Fast forward one week, Saturday, August 13th, 2022, my brother Philip Deery answered a call, that no parent wants to receive," the GoFundMe continued, noting that Robinson did not survive the crash and Meara was airlifted to St Michael’s Hospital in Toronto, in serious condition.

"Upon arrival, Meara was treated for head, neck, and leg trauma. She has undergone surgery for broken bones and has more procedures in her future," it reads.

Meara is the daughter of Brockville city councillor Phil Deery.

As of Thursday, the GoFundMe sits at more than $69,000 to help cover costs for the Deery family as they travel to Toronto. Money raised through the two pages will also help cover Robinson's funeral expenses.

OPP say both the operator and the passenger of the ATV were wearing helmets, and that they are still investigating the cause of the crash.

A second GoFundMe page set up by a friend of the Robinson family, has raised almost $40,000 "to help ease the financial burden of the funeral costs and the living expenses as the cope with their tragic loss", it reads.

The Brockville Gymnastics Academy shared on Facebook Wednesday that "Meara Deery and her family have been an integral part of BGA for over 2 decades."

It says Meara started gymnastics as a toddler, working her way up to compete provincially and represented Team Ontario at Tour in Florida, where she won first overall in Level 8.

Phill Deery also served as President of BGA's Board of Directors, the post continues, with her mother, Annette Hill-Deery, founding MAD Sportswear, who supplied suits and competitive warm-up gear for other gymnasts.

"At this time, we are asking all past and current members of the BGA community to share their thoughts, prayers, and well-wishes as means of support for Meara and her family during this extremely devastating time," the post reads. "We invite you to share your words of support below. Help us show the Deery family some LOVE."

An Ontario woman who was sexually assaulted by Hedley frontman Jacob Hoggard in a Toronto hotel room nearly six years ago says her life was 'shattered beyond recognition' as a result of the incident.

Which sponsors have pulled support for Hockey Canada?

Pressure appears to be mounting on Hockey Canada from both top corporate sponsors and political leaders, with Prime Minister Justin Trudeau suggesting that if the national hockey governing body continues to resist calls for change, the organization could be replaced. Several corporate sponsors have confirmed pulling their support. Here's what they have said about their decisions.

Bank of Canada governor Tiff Macklem says more interest rate hikes are necessary to bring inflation down, despite some early signs of a slowing economy.

The NDP are calling on the federal government to take steps to tackle 'greedflation' and get to the bottom of the rising cost of groceries.

A $1 billion class action lawsuit has been filed in the Court of King’s Bench against the Government of Manitoba and the Attorney General of Canada related to the child welfare system in Manitoba.

A former police officer facing a drug charge burst into a day care centre Thursday in Thailand, killing dozens of preschoolers and teachers and then shooting more people as he fled. At least 36 people were slain in the deadliest rampage in the nation's history.

In his first speech as sovereign, King Charles III voiced his 'love for Harry and Meghan,' signalling that tensions between the Royal Family, and Duke and Duchess of Sussex may be starting to cool. Reducing the rancour between these members of the Royal Family will be key to paving a path forward for the monarchy, says royal commentator Richard Berthelsen.

Canadian officials warn: Turkeys at U.S. border might be turned back

Ahead of Thanksgiving Day, the Canadian Food Inspection Agency is reminding cross-border shoppers that raw poultry or poultry by-products can’t be brought into the country from the U.S. due to ongoing avian flu outbreaks.

What is the Canada-U.S. Safe Third Country Agreement?

The Supreme Court of Canada will take time to weigh arguments about the constitutionality of an 18-year refugee agreement between Ottawa and Washington after hearing a challenge Thursday from claimants and human rights advocates.