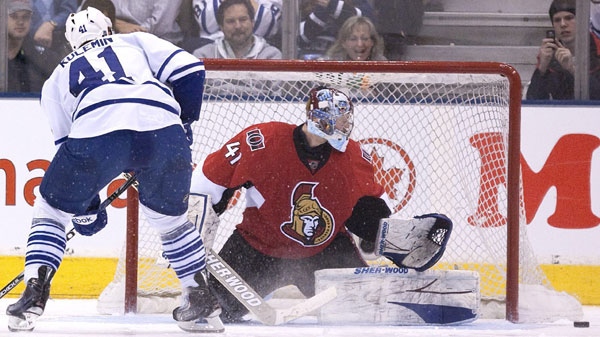 TORONTO - Craig Anderson hardly needed any time to make an impression with his new team.

The goaltender stole the show in his first game as a member of the Ottawa Senators, turning aside 47 shots in regulation and overtime before going perfect in the shootout during a 1-0 victory over the Toronto Maple Leafs on Saturday.

It capped a tumultuous 36-hour period that saw Anderson acquired in a Friday trade from Colorado for Brian Elliott. He barely had time to introduce himself to his new teammates before taking the ice at Air Canada Centre.

"The emotions are huge, they're running (high)," Anderson said after registering his first shutout in nearly a year. "I leave a team where I battled for two years ... it's tough to do that. But there's 20 new guys in here that are great guys, that I'm ready to learn with and get to know and grow with.

"What it's about here is growing together as a team and finding a way to make 20 new friends here like I did in Colorado."

He was a popular man after singlehandedly getting Ottawa just its second win in 15 games. Anderson's nicest stop came in overtime when he got a pad on a Phil Kessel chance that had the Leafs sniper burying his head in frustration on the bench.

Ottawa's Jason Spezza scored the only goal in the shootout as the team earned its first victory after regulation this season. All it took was a new face.

"He was in the zone all night," Spezza said of Anderson. "He just looked solid and we're happy to have him."

The next month and a half represents a major opportunity for the 29-year-old goaltender. After struggling to live up to a sensational 2009-10 season in Colorado, Anderson has been given a new life with unrestricted free agency on the horizon.

Not only will he get a chance to audition for the Senators, he can also showcase his talents for other teams heading into a summer that will also see the likes of Ilya Bryzgalov, Tomas Vokoun and J.S. Giguere potentially become available on July 1.

"In this game you're always auditioning for a job," said Anderson. "You're only as good as your next game. Tonight I'm going to enjoy this and tomorrow maybe enjoy a little bit more on a day off, but Monday I'll come back to work and start focusing for the next one.

The night was a missed opportunity for a Maple Leafs team that continues to hold out faint hope of getting into the Eastern Conference playoff picture. With Carolina and Atlanta both losing Saturday, Toronto failed to gain much ground on two rivals and now sits seven points back of the eighth-place Hurricanes.

"It just flat out sucks," said Leafs goalie James Reimer, who earned his second shutout of the season. "It's not the way I wanted it to end."

It was a pretty tame meeting between the once-heated rivals -- save for a spirited fight between Jay Rosehill and Francis Lessard and a big hit by Leafs captain Dion Phaneuf on Nick Foligno -- who have both seen experienced players shipped out of town in trades over the last week.

There were a combined 15 players between the teams who have spent some time in the American Hockey League this season.

"We've got nothing to lose out there, we're just going out and playing," said veteran Senators forward Chris Neil. "That's how we've got to approach it. We've got a lot of young guys in the lineup now with the trades that have happened. We're working hard, that's all we can ask."

Anderson was easily the best player on the ice.

He stopped 30 shots over the first two periods and was tested repeatedly in the third -- getting a glove on a dangerous Luke Schenn chance with less than 10 minutes to play in regulation.

"It's great for him," said Senators coach Cory Clouston. "I'm excited for him. The guys really like the way he played obviously."

Added Leafs coach Ron Wilson: "What I feared -- Craig Anderson being excited with a change of scenery -- he had a great night in a game we totally dominated."

The Leafs went 0-for-6 with a man advantage one night after trading power-play quarterback Tomas Kaberle to Boston. Special teams had been a sore point even with the veteran defenceman in the lineup, but Toronto really struggled to create chances while playing a man up.

There will be some hope now in Ottawa that Anderson could be the team's long-needed answer in goal. The feeling is mutual.

"I wanted to come in and make good first impression and show the guys I'm willing to work and battle for them," said Anderson. "When they see me battling and do everything I can possibly can it's picks their game up a little bit and they're willing to do a little bit extra."