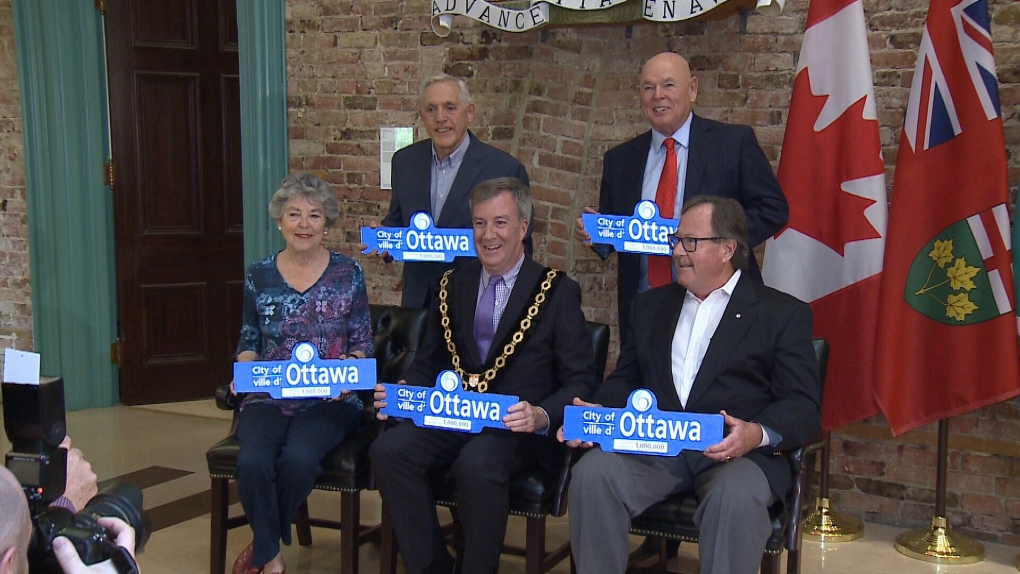 Past and present Mayors of Ottawa had a million reasons to celebrate today. They gathered together to celebrate a milestone for the city they helped build. Tomorrow marks the day that the population of Ottawa reaches one million residents.  That's a big deal and a good reason to gather together some of the folks who helped make that happen.

A song comes to mind when you scan the faces of the five mayors; Jacquelin Holzman, Jim Durrell, Larry O’Brien, Bob Chiarelli and Jim Watson: “We Built This City” by Starship, but perhaps it wasn't rock and roll that helped build this city; rather some blood, sweat and tears.  For former mayor Jim Durrell, his biggest challenge and greatest triumph was trying to get a hockey team here.

“One of the highlight was winning the Senators, which has forever changed our city,” he says.

For former mayor Holzman, her challenge was dealing with Rae Days.

“Between budget cuts and having to lay off staff because we just had to and trying to encourage people to live downtown, we're a better city for all of that.”

And for former mayor Chiarelli, it was squeezing several councils into one during amalgamation.

“When you had 12 municipal councils and over 100 councilors and you reduce that to one.”

And for several of the mayors, who have tried to bring light rail to an ever-expanding Ottawa.

“Jim is struggling as the whole city is to get it finished,” says former mayor Larry O’Brien, “but once it's finished it will be one of the most amazing city building projects that we've ever undertaken.”

As Ottawa marks a milestone this Friday, ringing in one million residents, thoughts turn to what's next for this great city.

As you can see, being mayor involves hard work and a sense of humor.

“We like to think of ourselves, we're all day mayors,” says current mayor Jim Watson, “not nightmares.”