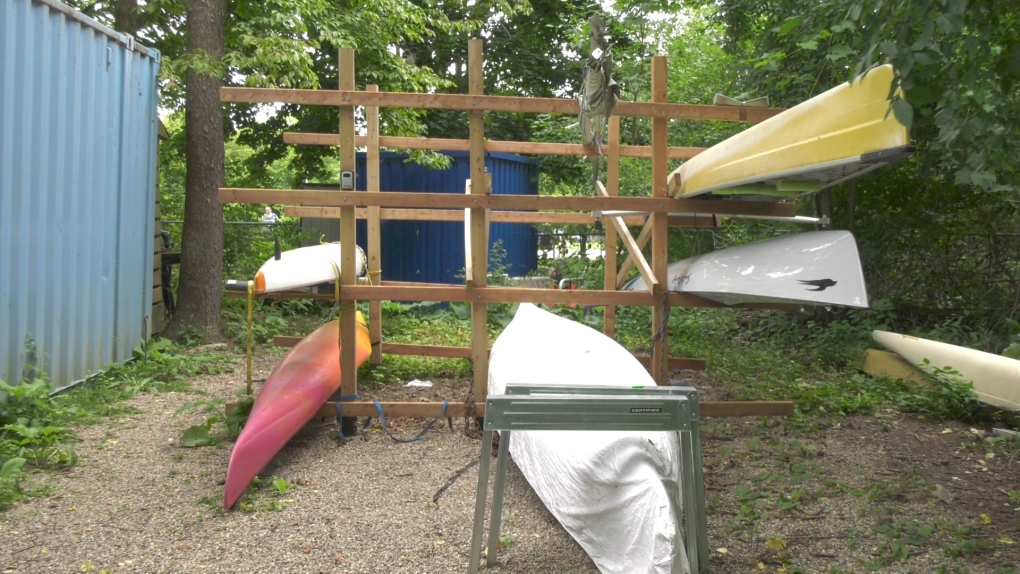 Paddleboards were stolen from a local kids' boating camp in Kingston, Ont. and owners say it's unclear if or when they will be replaced. (Kimberley Johnson/CTV News Ottawa)

Summer camp is a time for kids to get out and get active, but for one day camp in Kingston, Ont., a recent theft is making that more difficult, and the organization says it’s not sure when it will be able to replace it all.

The Limestone Boat and Board Club is a small club in Kingston’s west end. On July 25, camp councillor Andrew Chin says he and his fellow councillors arrived to find three paddleboards had been stolen.

“They’re not small and they are not light, so this would have had to be organized,” says Chin.

The three boards were brand new and had a special seat to them. The club sits in Rotary Park, out of a storage unit. The paddleboards were kept on a wooden shelving unit, and were locked up, says fellow councillor Eddie Vandyke, but it was cut open.

“They’re all locked and around all the boards, so there had to be some force used,” he explains.

What’s more shocking, explains Vandyke, is this was the second time the club had been hit, after a boat motor was taken from the dock.

“We felt really devastated and it really shocked us,” says Chin of the whole thing.

The camp’s owner says about $15,000 worth of equipment was taken in all. He says it will be difficult for them to cover because it’s a not-for-profit camp, and says they only make enough to cover operating costs through the summer.

It took the club several years to save up the money for the equipment, and then another two years to get it because of shipping delays. It is not known when it will be able to be replaced.

“We lock it up, think that’s enough, and then people take advantage of this little local business,” Chin says. “We’re just trying to help the community, get some kids in the water, teach them some skills, and they’re taking stuff from us which is frustrating overall.”

The group is raising money through a GoFundMe to help with costs, but say for now, camp continues.