'We've got a lot of damage': Ottawa residents begin cleaning up after storm damages homes, church

Residents and city staff are assessing the damage and beginning the cleanup after Saturday's severe storm left a trail of destruction across Ottawa.

The city of Ottawa has received multiple reports of damaged property and fallen trees, "particularly in the Navan, Stittsville, Merivale and Hunt Club area."

Unbelievably, this horse and her 24 hour old foal were okay after the barn came down around them. pic.twitter.com/sQQUsXhIxd

This is the damage in Navan. An entire farm wiped out. Thankfully everyone, including the animals, is okay. #OttStorm #Ottawa #OttNews pic.twitter.com/6bbmTBxyLZ

In Navan, the McWilliams Farm was severely damaged by the storm, with the strong winds and rain knocking down several barns and buildings on the property. Several animals were reported trapped.

Troy McWilliams described the moment the storm rolled in.

"I turn and see this huge wall of dust moving in, i couldn’t see anything I couldn’t see any of the neighbours houses or anything," he told CTV News. "I’m getting poured rain on, wind is crazy, so I dive under the bailer and I hold onto it while I'm under it. I’m there for about 30 seconds and it stops enough that if I let go I won’t get sucked out of there, so I let go, crawled over to the combine and climbed up the ladder to the combine."

Clayton McWilliams said it was a blessing to see a mare and foal unharmed after the storm.

"I came around the barn and the mare and brand new foal were unharmed and I crawled in under just to see if anything else was there and the goat was totally fine, just stuck," he said. "We just lifted the barn a little bit, pulled it out and they were both totally fine. Very grateful for that."

The sounds of chainsaws filled the air in Navan on Sunday.

Roxanne took CTV News Ottawa's Graham Richardson on the tour of the damage at her Navan property, where a tree hit the roof.

"There's a lot of weight on top of it," Roxanne said of the tree resting on the roof of the home.

On Trim Road, Kelsey said her backyard was damaged.

"We lost a lot of trees," Kelsey. "They all kind of leaned against the house behind us."

More damage in #Navan a tree is on Roxanne’s home she’s hoping to get it removed before it goes further into the house #ONStorm #ottnews #ottawa #weather #cleanup pic.twitter.com/mfx6h6d8ch

Across Ottawa, trees litter roads and sidewalks, and several homes have been damaged.

"We did have a big, big Manitoba maple in the backyard, and it fell back on to the house and we've got a lot of damage," TSN 1200's Steve Lloyd said about the damage to his home in the Merivale/Meadowlands area.

Lloyd told Newstalk 580 CFRA that the 50-foot tall tree was lifted up by its roots during the storm and "tipped it right over", leaving a giant hole in the roof and damage to his daughter's bedroom.

"It's extensive damage on that side of the house. It didn't miss the house at all, it came right down right on the house."

Further south from Lloyd's house in the Country Place neighbourhood, Manon Hendry says a giant tree damaged to her home.

"We had a huge tree go through our house. It destroyed my two girls' bedrooms, now the first floor is probably getting water damage," Hendry said.

"Our backyard is a mess."

A snapshot of the aftermath left by the deadly storm that tore through Ontario. #ottnews @ctvottawa
1) A tree splits the top of a house in Country Place
2) The interior of the damaged house
3) Broken hydro poles along Merivale Rd
4) Cleanup continues throughout Ottawa pic.twitter.com/wMgcCRpwFz

Hendry says her family was staying with relatives. She returned to the house Sunday to assess the damage.

A Nepean woman heartbroken after a tree tears through her home from above during Saturday storm that swept through the region. #Ottnews @ctvottawa pic.twitter.com/fG6MOanQod

"It’s awful, but everybody is safe, the pets are safe, but I can’t imagine," she said. "I never thought I was going to go through this in my life." 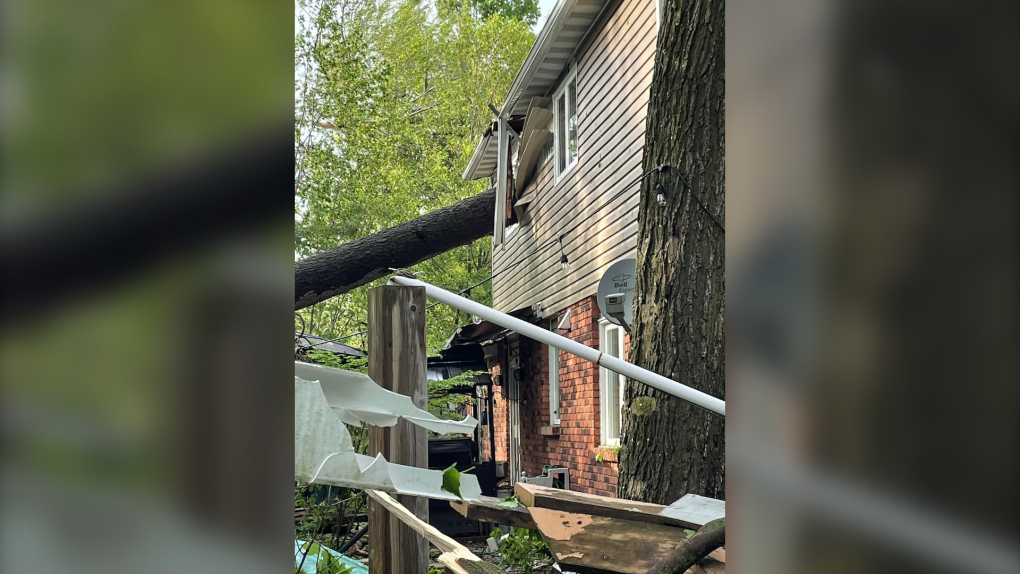 Hydro Ottawa says 200 hydro poles have been damaged by the storm.

In Ottawa's east end, Coun. Catherine Kitts shared photos on Twitter of damage to properties, including a giant tree on top of a house.

Coun. Keith Egli, whose ward was severely damaged by a tornado in September 2018, admitted the damage in his community "is not looking good."

Egli shared photos of trees on top of homes in the Country Place and Pineglen neighbourhoods.

Some photos from Country Place and Pineglen today. So much damage . It is like the 2018 tornado all over again . pic.twitter.com/s6cK9zP3xu

Hendry praised her neighbours for coming together during this horrific event.

"Everybody has been giving a hand to everybody."

Common sight in the ward tonight . I would ask folks to be patient . Crews are out and clearing as quickly as they can. 311 will have long waits but does have a callback function. We have been through this before and we will get through this as well. pic.twitter.com/nti8mxQv8p

THE OTTAWA HUNT AND GOLF CLUB

The Ottawa Hunt and Golf Club is closed until further notice after the storm caused extensive damage to the course.

The course on Hunt Club Road shared images on Instagram of downed trees and damage across the course.

"Yesterday was a very sad day for us. The storm caused severe and extensive damage to our beautiful course," the Ottawa Hunt and Golf Club said.

"The clubhouse and course is closed until further notice. We are thinking of everyone who has been affected by the storm."

A post shared by The Ottawa Hunt and Golf Club (@theottawahuntclub)

Pinecrest Cemetery in the area of Greenbank Road and Baseline Road was severely damaged by the storm.

The roads around the cemetery were also blocked by the fallen trees. 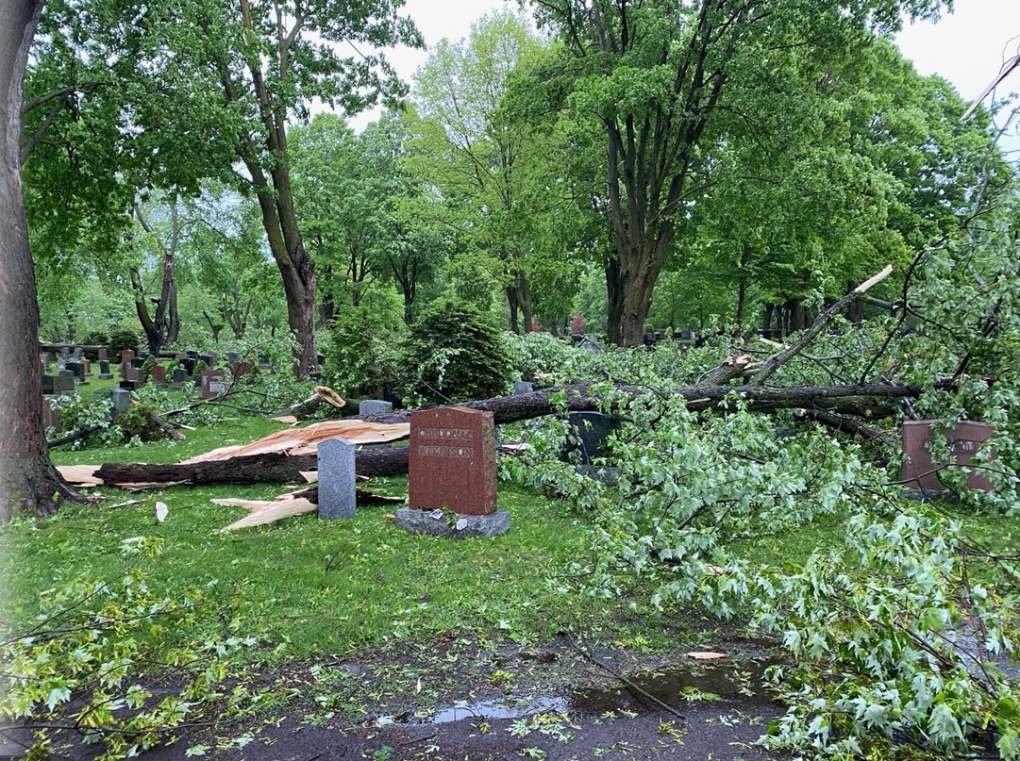 The Paroisse Saint-Hugues in Sarsfield was significantly damaged by the storm.

CTV News Ottawa's Graham Richardson shared a photo showing damage to the church, including the steeple blown off the top of the building. 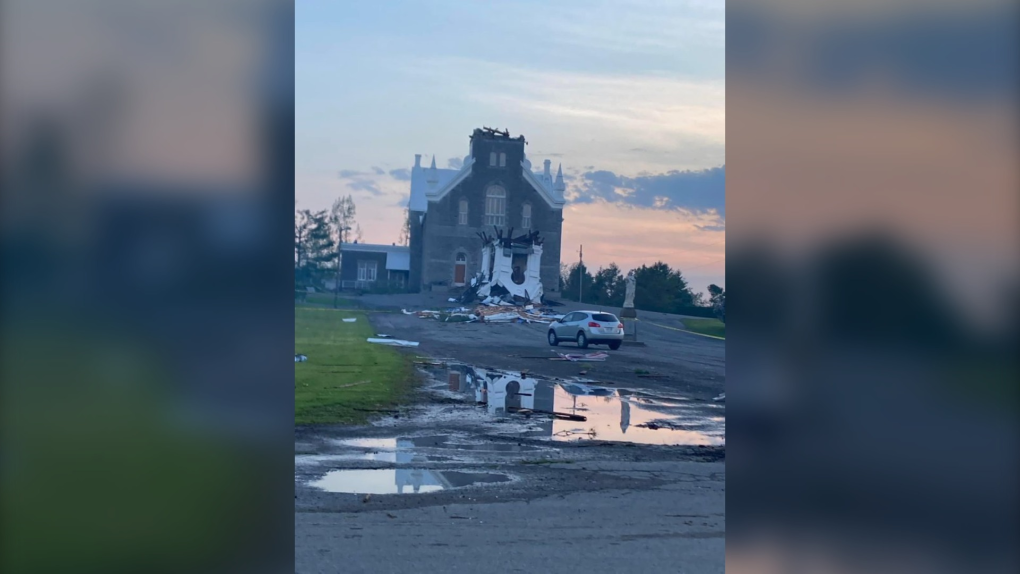 Brookson Farm in Ottawa's southeast end has been significantly damaged by the storm.

"The indoor arena is completely destroyed and there is a significant amount of damage to fencing and other outbuildings," said Brookson Farm in a post on Facebook.

There are no reported injuries and all horses are okay.

All lessons will be cancelled until further notice.

Brookson Farm is located on Russell Road in Carlsbad Springs.

About half of Americans say Trump should be charged for U.S. Capitol riot: poll

About half of Americans believe former U.S. President Donald Trump should be charged with a crime for his role in the U.S. Capitol attack on Jan. 6, 2021, a new poll shows.

Migrants who died in trailer tragedy were seeking better lives

As families of the 67 people packed into a tractor-trailer and abandoned on Monday in Texas began to confirm their worst fears and talk of their relatives, a common narrative of pursuing a better life took shape from Honduras to Mexico.