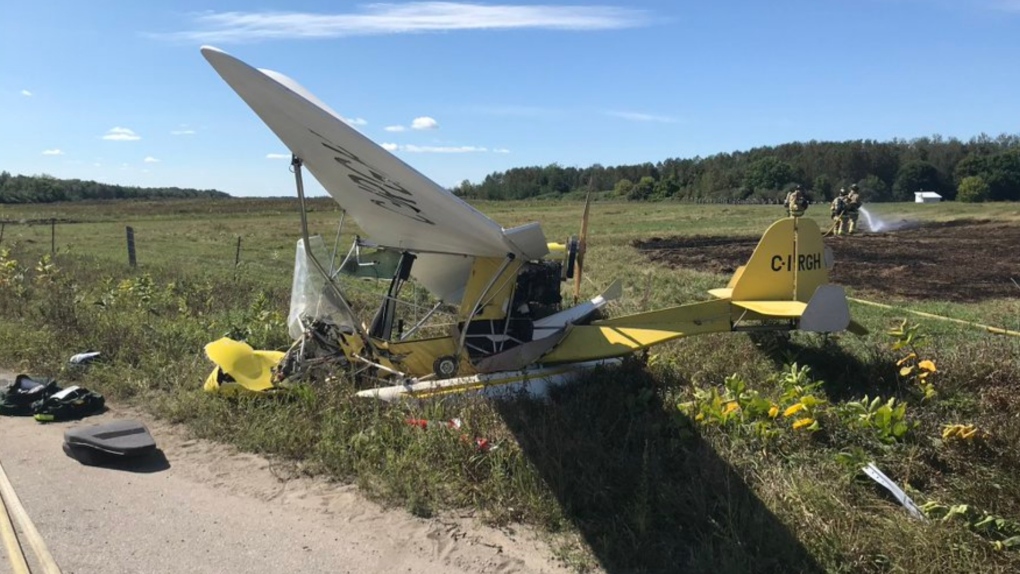 Two men were seriously injured after their small plane crashed in a field near the Carp Airport in rural west Ottawa. Sept. 4, 2021. (Photo courtesy of Ottawa Fire Services / @OttFire / Twitter)

OTTAWA -- Ottawa paramedics say two men in their 60s are in serious condition after a small plane crash in Ottawa's rural west end.

Both men were taken to the hospital but paramedics say their injuries are not life-threatening.

Reports of the plane crash near the Carp Airport came in at around 1:50 p.m. Saturday.

The Transportation Safety Board of Canada said in a statement it was aware of the incident but would not be sending investigators to the scene. The TSB identified the plane as a privately-registered Quad City CHALLENGER II ultralight aircraft.

In a tweet, Ottawa police said Carp Road is closed at Russ Bradley Road. Residents are being asked to avoid the area.

We are responding to a report of a small plane crash in the Carp area. Carp Rd is currently shut down at Russ Bradley Rd . Avoid the area please. Updates to follow. #ottnews #otttraffic

Ottawa Fire Services says firefighters helped extricate the two men from the plane. As it came down, it took down some hydro wires, which started grass fires.

@OttFire responded to a plane crash on Carp Rd. Two patients needed to be extricated from the plane. The plane took down hydro wires which caused two separate grass fires. #OttNews pic.twitter.com/rr5ivDFFf6

Public Information Officer Nicholas DeFazio tells CTVNewsOttawa.ca by phone that there were two grass fires as a result of the crash and both have since been extinguished.

Hydro One is reporting one small outage in the area, each affecting 33 customers. The estimated time of restoration is 6 p.m.