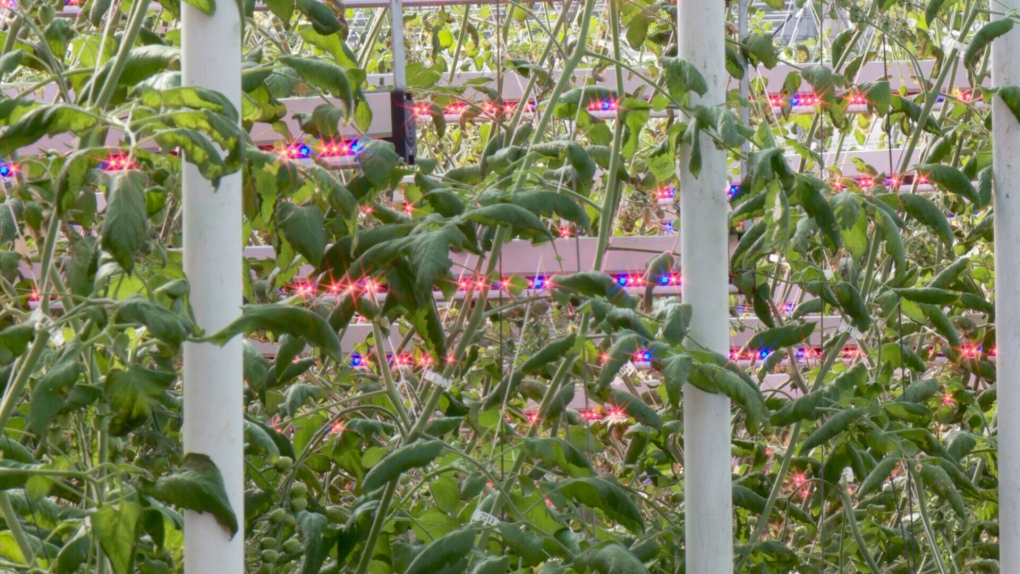 An Ottawa greenhouse operation is trying to mimic Mother Nature to grow produce year 'round.  SunTech Greenhouses in Manotick have installed a million-dollar L-E-D lighting system to convince tiny tomato plants to produce even in the dead of winter. Even on the coldest of days outside, you can hear the buzz of bees inside the greenhouses along Doyle Road in Manotick, busy pollinating thousands of tiny plants.

Bob Mitchell is the owner of the 90-acre lot, “When you realize that, hello, I’m playing with flowers in February!  I've got more bees coming in this week. And it's February, hello!”

Carmen Perez is the co-owner of SunTech and Bob Mitchell’s wife, “During the months of December, January and until mid-February, if you’re lucky,” she says, as she takes us on a tour of the greenhouses, “you wouldn’t see any SunTech tomatoes.  We weren’t producing.  It was just not possible.”

Until now.  Last year, SunTech installed rows upon rows of L-E-D lights in 1 ½ acres of the greenhouses; an expensive experiment in trying to mimic Mother Nature.  The problem is, she's not easily fooled.

“Despite the fact they look bright to look at them,” says Mitchell, “compared to that natural light, they don't hold a candle to it.  Sorry,” he says, as he laughs at his own joke.

While the plants are producing, the lights don't quite meet their energy requirement.  The plants are losing their ability to regulate all of the micro-nutrients.  Hence, the brown leaves on many of the plants.

“Nobody told me this,” says Mitchell, “I learned it on my own.”

It’s been a steep learning curve for Mitchell, a former dairy farmer and cash cropper who opened the first facility in 1999.  It has since expanded to cover roughly 4 acres.  It has been a steep price, too.  There are one million diodes in the greenhouses, blanketing tiny cucumber plants, tomatoes, even green beans in artificial light.  But the million-dollar investment takes real-life energy, too, at $88 an hour to run them.  Multiply that by the 10 to 14 hours a day the lights may be on during the winter’s darkest months, and it adds up.

For customers at Produce Depot, which stocks SunTech Tomatoes, there is great payback.  They are surprised to see the sweet, quality tomatoes on the shelf in the dead of winter.

“Awesome, I love it,” says one loyal customer, “sometimes I can’t get them and I’m without them. So, I’m happy they’re doing this.”

“I think it’s a good idea to create at winter-time fresh veggies instead of importing from south of border or from other parts of the world,” says another man.

Mitchell says he plans to persevere and hopes he can turn all four acres “pink”.  In the meantime, he's taking one winter day at a time.