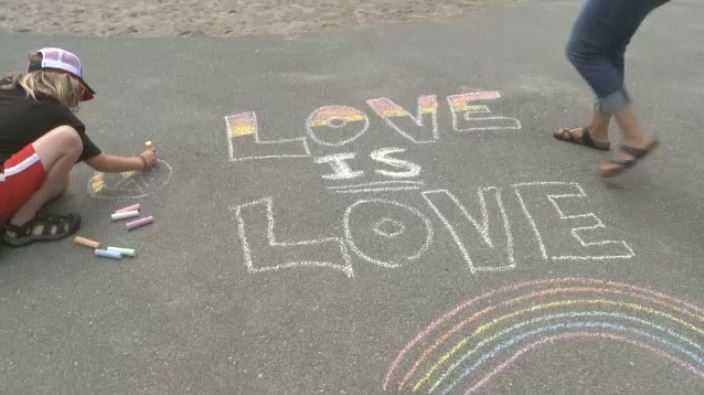 The community rallied together Sunday; a day after religious protesters interrupted a drag queen story-telling event.

On Saturday, the event was held in Bells Corners at the Westcliffe Community Centre. Drag Queen Adrianna Exposée read to a group of children and their parents.

As the event was closing, protesters stood up objecting the message directed at young children.

Adrianna Exposée says at first didn’t know what to do. “Initially I was just shocked and my body went numb.”

Exposée says she tried to respond to protesters to defend the LGBTQ community. “That’s when the fire went off, and I had to step in; and at first I didn’t know if it was the right thing to do, but looking back I know it was.”

The man in the video is said to be Dorre Love, a preacher who was also present at Saturday's protest against the Satanic Temple Canada Ottawa chapter's 'Black Mass."

Rick Boswick was in the audience at the time, and supports Dorre Love. “It concerns me because the age of the children that were there, they were really there at the behest of their parents.”

On Sunday, Pride Week was kicked off at the Hintonburg Community Picnic. A large crowd of people coming to show their support after hearing what happened Saturday, Including Dave Weatherhall who brought his 5-year-old son Felix.  “I want him to grow up in a world where he feels free and comfortable to be whoever he is.”

Capital Pride festival Executive Director Toby Whitfield says, “Those sorts of incidents have no place in our community in Ottawa, and we are responding to remind everyone that this is a festival for everyone.”

Many city councillors and officials were also in attendance Sunday.

Capital Pride continues until next Sunday.