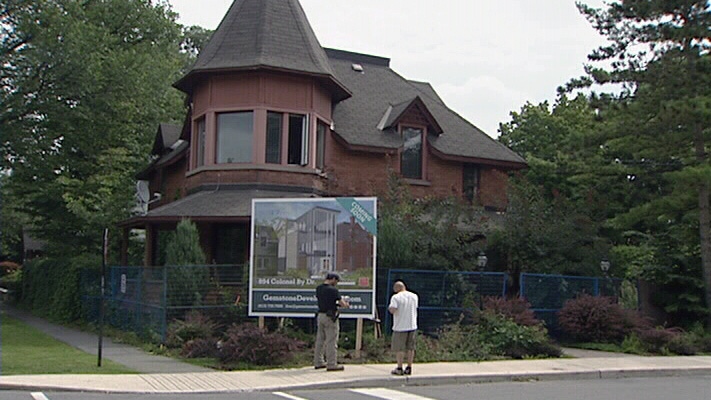 Intensification of Ottawa’s core is igniting battles all over this city as residents and developers lock horns.

From an architectural perspective, the newly-built houses are big, and bold in design; in complete contrast to their older neighbors.  Long established neighbourhoods along Ottawa's Rideau Canal are changing despite lobbying from local residents.

"There is room for new development here,” says Brian Oak, who lives in a century-old home on Rosedale, “but it has to be done with sensitivity and concern.”

Oak lives next door to an old Craftsman cottage that faces the Rideau Canal. The 5-bedroom house is being demolished and Oak believes the plan is to replace it with two modern-style townhomes.

“There's a fair amount of anxiety in terms of what we've seen not only because of the house beside us but throughout the district here.”

A block away, a beautiful house at the corner of Colonel By and Leonard was recently sold and a sign about future development erected, prompting anxiety and anger in the neighbourhood.

"There has been some vandalism; some neighbours have tried to stop the work,” says the new owner of the house, Josh Zaret.

Zaret is also with Gemstone, the developers.  He plans to renovate his home but his lot has been severed to allow for a new infill right beside it.  Barry Hoban is the architect.

“The retention of the house restricted any other development,” says Hobin, so that is the solid piece.  Adding one piece of infill instead of 4 houses, or tearing down a landmark seems to me a complete no brainer.”

It’s a no brainer for the city, too.  The city of Ottawa is pushing infill housing over suburban sprawl.  It's easier on the city budget and increases the tax revenue.

Still, locals were concerned the stately home on Leonard would be lost.

"Yes we were,” says Carol Lundy, who lives nearby.  “It's a heritage home on Colonel By and Leonard and we love the old houses.”

The city has recently brought in some changes that will affect future development in the area.  Councillor David Chernushenko says at the heart of the matter is a desire to “halt the destruction of community character without blocking all redevelopment, infill and even renovation of existing properties.”  A report, unanimously approved by council, recommends reducing building height limits from 11 metres to 9 metres; implementing a limit on rear-yard development and implementing a Heritage Overlay that ultimately could prevent future demolition of the houses along Colonel By.

It's too late, though, for the house next door to Brian Oak.

"Neighbors have done what we can, tried to engage developer, tried to ensure city is aware of our concerns.”

Their last fight now is over the 125-year-old oak tree on the property.