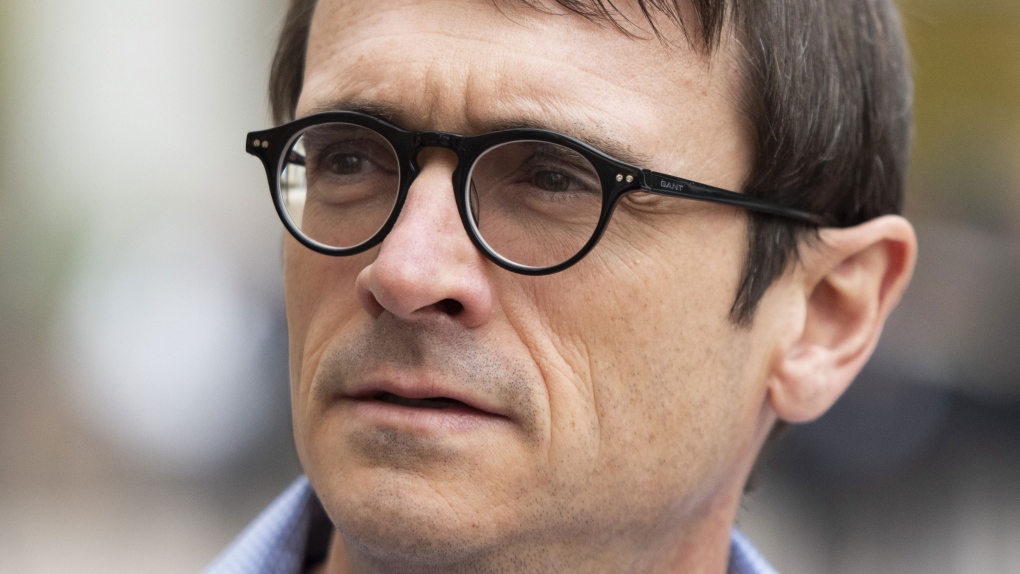 Cameron Ortis, a senior intelligence official at the RCMP, leaves the courthouse in Ottawa after being granted bail, Tuesday, Oct. 22, 2019. A judge has revoked bail for a senior RCMP official awaiting trial on charges of breaking Canada's secrets law. THE CANADIAN PRESS/Justin Tang

OTTAWA -- A senior RCMP intelligence official charged with breaking Canada's secrets law was headed back to an Ottawa jail after a judge rescinded his bail Friday.

Under the terms of bail set last month by a justice of the peace, Cameron Jay Ortis was living with his parents in Abbotsford, B.C., had to report to police once a week and was forbidden from using any device that connects to the internet.

Ontario Superior Court Justice Marc Labrosse said Friday that Ortis would be returned to custody as a result of a review requested by the Crown.

The reasons for Labrosse's decision and details of the Crown's review application, heard last week, are covered by a publication ban.

Ortis, 47, faces charges under the Security of Information Act for allegedly disclosing secrets to an unknown recipient and planning to reveal additional classified information to an unspecified foreign entity.

He faces a total of seven counts under various provisions, dating from as early as Jan. 1, 2015, to Sept. 12 of this year.

"The Crown's position was always that Mr. Ortis should be detained," prosecutor Judy Kliewer said following Labrosse's ruling. "I can't say anything more about the case right now because of the publication ban, which is in place in order to protect Mr. Ortis's right to a fair trial."

RCMP officers were waiting Friday outside the Ortis family condominium in Abbotsford.

"We had to ensure that in the event that Mr. Ortis was detained, that there were plans in place to ensure that he was remanded into custody immediately, and we did that," Kliewer said.

"We thought that the justice of the peace's decision was reasonable and the correct one," he said.

The defence wants to see more of the Crown's case against Ortis, Carter added.

"Basically we need to get more disclosure, we don't have all the disclosure yet to analyze the case and begin preparation for defending him against these charges."

Kliewer said the Crown was "continuing with the disclosure process" and would soon move to set trial dates.

Unlike the case for many criminal offences, Ortis had the burden of demonstrating why he should be freed on bail while he awaits trial on the secrets-law charges.

The bail conditions established last month required that Ortis and his parents, who were acting as sureties, each post a $125,000 bond.

One of his parents was to be in the B.C. residence with him at all times and accompany him on outings.

All phones, computers and tablets in the home were to be password-protected and locked away when not in the possession of Ortis' parents.

In addition, Ortis could not attend any place that had public internet access, was forbidden from possessing weapons and was required to surrender his passport to authorities.

The Security of Information Act, passed following the 9/11 attacks on the United States, is intended to safeguard sensitive government secrets. Charges have been rare but Jeffrey Paul Delisle, a naval officer who gave classified material to Russia, pleaded guilty to offences under the act in 2012.

RCMP Commissioner Brenda Lucki has said the allegations against Ortis are unsettling, noting that as director general of the force's National Intelligence Co-ordination Centre, he had access to information from domestic and international allies.

Lucki told a news conference in September that investigators came across documents during a joint investigation with the U.S. Federal Bureau of Investigation that led the Mounties to believe there could be some kind of "internal corruption."

This report by The Canadian Press was first published Nov. 8, 2019.