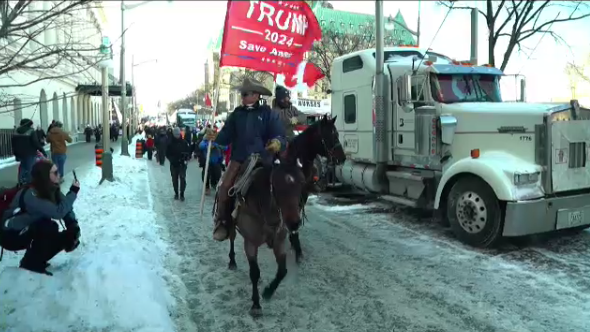 Two protesters on horseback, including one carrying a ‘Trump 2024’ flag, stood out in a crowd of thousands of people protesting COVID-19 vaccine mandates in downtown Ottawa.

"We come to be free," said the unidentified man from Brantford, Ont. carrying the 'Trump 2024' flag.

"We come because I think we're at the end of what needs to be done for COVID and people are ready to move on and people need to be free enough to move on. Everybody in the world is moving on except (Prime Minister Justin) Trudeau."

The man was also asked if the horses were bothered by the noise.

The Ottawa Humane Society responded to reports of horses at the protest.

"For any animal, prolonged exposure to freezing temperatures, loud noises, road salt on paws or hooves, and inadequate access to food and water can threaten an animal’s wellbeing," said the Ottawa Humane Society on Twitter.

Tanya Ball began her career as a social worker for the Kaska Dene First Nation. Now she runs a land guardian program, working to monitor and protect a vast stretch of the band's northern British Columbia wilderness.

Russian forces were trying to block a city in eastern Ukraine, the region's governor said Saturday, after a relentless assault on a neighboring city forced Ukrainian troops to begin withdrawing after weeks of intense fighting.