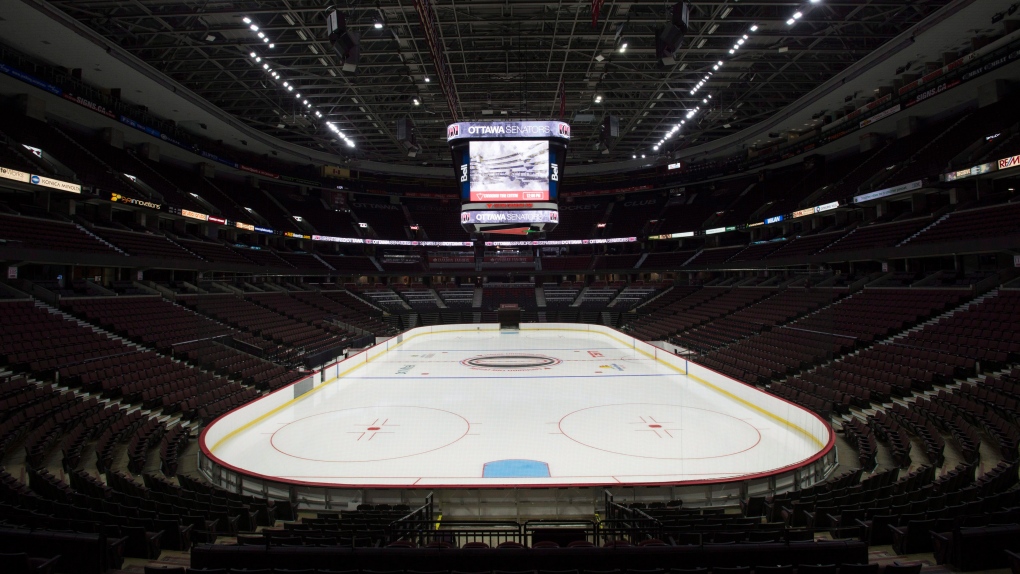 The ice surface and bowl of the Canadian Tire Centre where the Ottawa Senators play is seen Thursday September 7, 2017 in Ottawa. (THE CANADIAN PRESS / Adrian Wyld)

OTTAWA -- Alexis Lafreniere will have to wait a little longer to find out where he'll start his NHL career.

One of eight placeholder spots beat the odds to secure the No. 1 pick in the league's draft lottery Friday, meaning a second draw is required later this summer following the qualifying round of the NHL's return-to-play plan.

"We'll still have to wait a little bit," Lafreniere, the presumptive top pick, said on the live television broadcast after the order was unveiled.

The eliminated clubs from eight separate best-of-five play-in series will each have a 12.5 per cent chance of securing the top pick in the second phase of the lottery.

The Los Angeles Kings moved up from fourth to pick second, while the Ottawa Senators, who had the best combined odds of picking first at 25 per cent because they also owned the San Jose Sharks' selection, will select third and fifth.

"It's an interesting night when you're coming into this, because you know all the odds and the different scenarios," Kings general manager Rob Blake said. "We were sitting fourth coming into this and we finished second, so we're excited about that opportunity."

The Detroit Red Wings, who had the best singular odds to pick first at 18.5, fell to No. 4 after losing all three lotteries for the top-3 picks.

"We all knew this could happen," Senators GM Pierre Dorion added of seeing a placeholder get the No. 1 spot.

The league was originally scheduled to hold the first round of the 2020 draft Friday night at the Bell Centre in Montreal before the COVID-19 pandemic forced a pause to the season back in March.

Lafreniere -- a winger for the Rimouski Oceanic and NHL Central Scouting's top-ranked North American skater -- is expected to go first overall when the draft is eventually held at a later date.

The Anaheim Ducks, New Jersey Devils and Buffalo Sabres round out the top-8 in what is the most complicated lottery in NHL history.

Apart from its own pick, 30th-ranked Ottawa also possesses San Jose's selection as part of the blockbuster trade for star defenceman Erik Karlsson in September 2018. San Jose was 29th in the overall standings when the league went on hiatus.

The seven draft spots owned by franchises outside the league's 24-team plan to resume the 2019-20 season later this summer were confirmed as part of the draw, but the other eight were occupied by placeholders representing clubs that will eventually lose out in the best-of-five qualifying round ahead of the playoffs.

Picks nine through 15 will now be determined by the yet-to-be-eliminated teams' regular-season points percentage at the time of the league's pause on March 12.

And there's still no guarantee the NHL will be able to resume its season this summer.

The league and the players' association continue to negotiate a number of details related to the plan to resume the pandemic-hit campaign -- among them health and safety concerns, and where the two hub cities will be located -- all while attempting to tie everything together with a possible extension to the current collective bargaining agreement.

Lafreniere, the two-time Canadian Hockey League player of the year, had 35 goals and 112 points in 52 games before the Quebec Major Junior Hockey League season was cancelled because of the novel coronavirus outbreak. The 18-year-old from St-Eustache, Que., was also named MVP of the 2020 world junior hockey championship after helping lead Canada to gold.

"He's shown himself at every level, every event that he's capable to be the difference maker," said Dan Marr, director of NHL Central Scouting. "He knows what needs to be done, and he can go out and make that happen. There's not too many players that can take control of a game, take control of a situation.

"He has the talent, the skills, the speed, the smarts, the compete, the battle, the perseverance, the will to be the best, and the will to win."

Sudbury Wolves centre Quinton Byfield of the Ontario Hockey League is ranked No. 2 behind Lafreniere on the North American list, while German winger Tim Stutzle slots in as the No. 1 European skater.

"This is a hell of a draft, especially at the top," said Calgary Flames general manager Brad Treliving, whose team is preparing to meet the Winnipeg Jets in the NHL's qualifying round. "There's some big-time players."

The draft lottery is usually held in April at the conclusion of the regular schedule and before the playoffs, but was pushed back because of the pandemic before the NHL unveiled this format as part of its return-to-play plan last month.

This report by The Canadian Press was first published Friday, June 26, 2020.