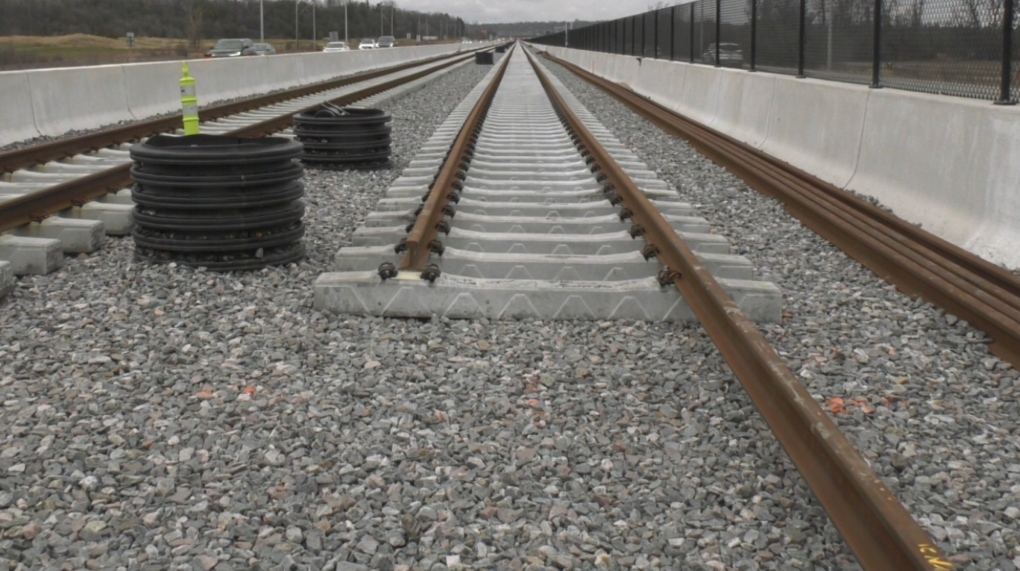 Rail tracks are being laid down as part of the eastern extension of the city's Stage 2 light rail transit project. Labour and supply chain issues are putting pressure on Stage 2, delaying the western extension. (Leah Larocque/CTV News Ottawa)

The city of Ottawa says labour and supply chain issues are putting pressure on finishing the western extension of Stage 2 LRT on time.

Kiewit-Eurovia-Vinci (KEV) is the construction consortium contracted with the extension of the Confederation Line. Director Chris Loeffler says, “At this time, we are still analyzing the schedule,” when asked whether the line would be completed by the target date of 2025.

Ottawa’s Stage 2 LRT will extend west from Tunney’s Pasture to Moodie Drive. In the east it will connect Blair Road to Trim Road.

Loeffler says, “In the west (extension), we have some real challenges, we have some geotechnical issues as well some other supply issues. We have had a hard getting enough manpower, we are bringing in a lot of carpenters and workers from other provinces to help out with that.”

This comes as the city marks a milestone for the eastern extension. Rail tracks have arrived and are being laid just past Blair station near Jeanne d’Arc Boulevard. The target completion date is 2024.

Loeffler says despite labour and supply issues, the eastern extension is on time. “As we look to the east, we expect to be on time. We are having a hard time getting some of our supplies out of different areas, some supply chain problems that we are seeing, we are working through those as they come but, all things considered, we look to be on time in the east.”

Mayor Jim Watson says the city will not commit to a specific completion day, “We learned a long time ago if we put in a specific date or month and we miss it by one day, we are better to just say 2024, and 2024 goes until December 31.”

Watson says, “This is a very important day and date for the people in the east, they have proven time and time again to be the best transit users on a per-capita basis than any part of the city. This is going to give them more of a faster, reliable transit service.”

In December, the city learned the extension of the Trillium line to Riverside South as part of Stage 2 will be delayed by nine months, and now has a target completion date of May 2023.

Stage 2 LRT comes with a price tag of $4.6 billion dollars and will be funded by the federal government, the province, and the city.

Canada found itself under the spotlight on Wednesday as the head of the NATO military alliance said he expects Canada to fulfil its commitment to other members and increase its defence spending to meet the needs of an increasingly dangerous world.

Recent data shows more than half of all flights from some of Canada's major airports are being cancelled or delayed, as frustrations for travellers mount due in part to increased summer travel and not enough airport staff.

NATO calls Russia its 'most significant and direct threat'

NATO declared Russia the 'most significant and direct threat' to its members' peace and security on Wednesday and vowed to strengthen support for Ukraine, even as that country's leader chided the alliance for not doing more to help it defeat Moscow.

Access to mental health services is taking a hit in Newfoundland and Labrador as psychologists in the province continue to leave the public system en masse.