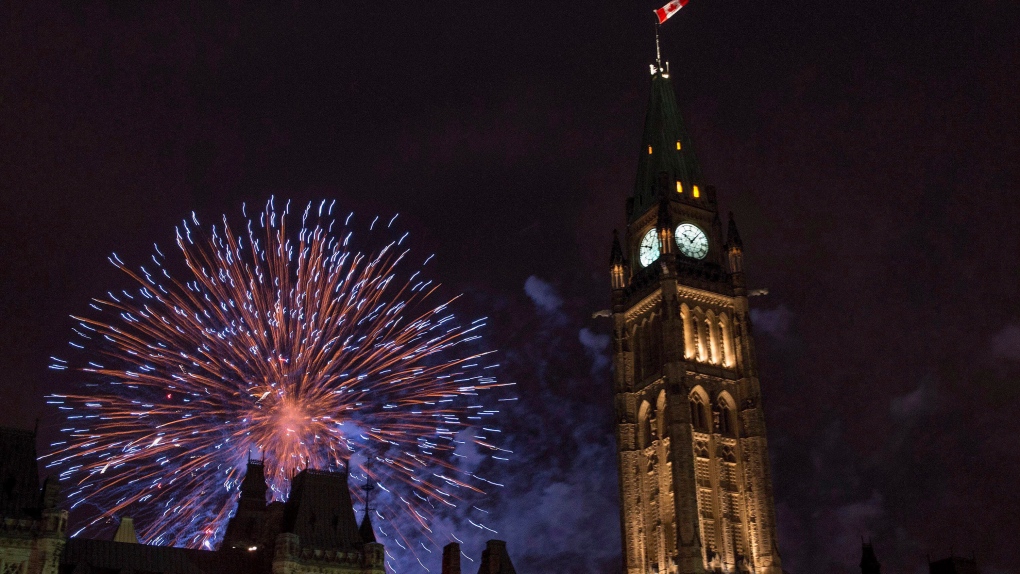 Fireworks explode behind the Peace Tower on Parliament Hill during Canada Day celebrations, in Ottawa on Wed., July 1, 2015. (THE CANADIAN PRESS/Justin Tang)

OTTAWA -- For the second year in a row, Canada’s biggest birthday celebration will be held virtually in Ottawa.

Canadian Heritage has announced plans for a virtual show on July 1, instead of the usual massive celebrations at Parliament Hill, Major’s Hill Park, and other venues across the national capital region.

"Canada Day is a one-of-a-kind event that brings together Canadians across the country," said Canadian Heritage in a media release.

"This year, more than ever, Canada Day presents an opportunity to show solidarity, understanding, and resilience. It invites Canadians to come together from coast to coast to coast to reflect on our history and culture."

The social media hashtag #CancelCanadaDay has been trending following the discovery of the remains of 215 Indigenous children at the site of a former residential school in B.C.  Earlier this week, the City of Victoria announced it is no longer planning to host a virtual Canada Day celebration on July 1. Instead, it will create a broadcast focused on broader Canadian history with guidance from local Lekwungen people.

Canadian Heritage said Canada Day provides a day to hold "truthful, reconciling and inclusive dialogue, strengthen the ties that unite us, and look toward our country’s future with optimism while acknowledging the past."

On July 1, Canadian Heritage will host "Lights on Canada Day" at 8 p.m.

"The spotlight will be on those whose job it is to bring beauty to our lives and make our culture shine,” the Canadian Heritage statement said. "Lights on Canada Day is the Canada Day evening program, where we will showcase artists and artisans in the entertainment industry across the country, highlighting the excellence of their work."

Canada Day celebrations typically include a noon show and an evening show on Parliament Hill, featuring Canadian artists. This is the second straight year in-person Canada Day festivities have been cancelled in Ottawa due to the COVID-19 pandemic.

"For the second year in a row, in light of the current and ongoing COVID-19 pandemic and the government’s priority of keeping Canadians safe, Canada Day will bring all Canadians together and allow them to express their national pride and honour for others in a virtual environment," said Canadian Heritage.

Ottawa and Ontario entered Step One of Ontario's COVID-19 reopening plan on Friday, which allows outdoor gatherings of up to 10 people. Outdoor performing arts and live music events are allowed in Step Two, while large indoor and outdoor social gatherings and organized public events are prohibited until Ontario enters Step Three, which isn't expected until late July.