Mark Sutcliffe is the new mayor of Ottawa.

"Tonight, the people of Ottawa made a clear decision; you voted for positive change," Sutcliffe told supporters at Lago about 90 minutes after polls closed.

"What a beautiful night in Ottawa," Sutcliffe told supporters in a victory speech at 9:20 p.m.

"I am feeling a lot of emotions right now: humility, excitement, job, a lot of relief, but most of all I'm feeling incredible gratitude. I’m so thankful for the experience that Ginny, my family and I have had through this campaign, and I'm especially grateful for the tens of thousands of people who support our vision for the future of Ottawa." 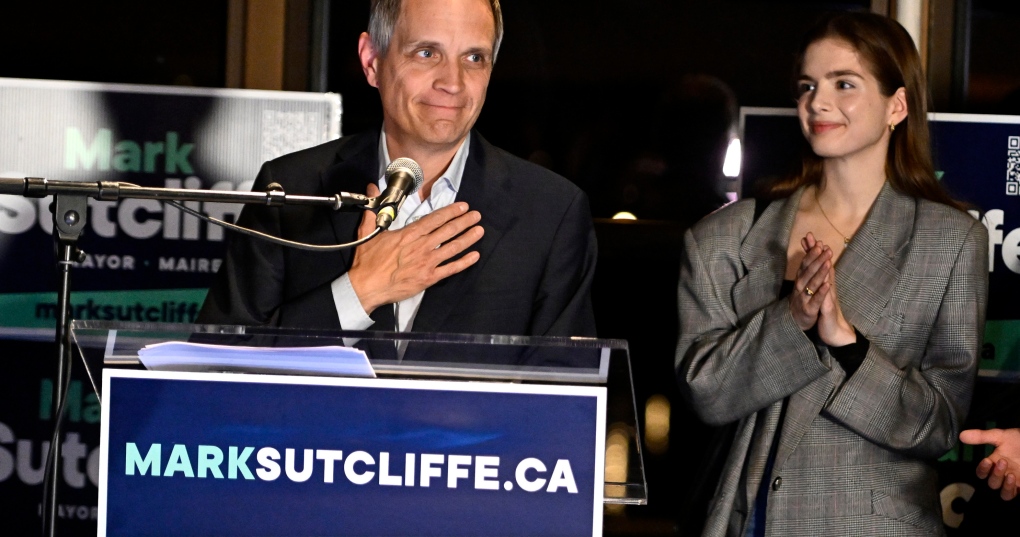 Mark Sutcliffe puts his hand over his heart as supporters chant his name as he speaks on stage with his family by his side after being elected Mayor of Ottawa in the 2022 municipal election, in Ottawa, on Monday, Oct. 24, 2022. THE CANADIAN PRESS/Justin Tang

Sutcliffe is one of 12 new faces at Ottawa city hall for the new four-year term.

Public opinion polls showed Sutcliffe and McKenney were in a tight race leading up to Monday's election. Sutcliffe paid tribute to McKenney after the votes were counted.

"I have always admired and respected Catherine, and every day during this campaign I gained even more respect for them. Catherine is a trailblazer, Catherine is an incredibly passionate advocate for the most vulnerable, and Catherine has an unequalled ambition for what our city can be," Sutcliffe said.

Re-elected Kitchissippi Coun. Jeff Leiper congratulated Sutcliffe on the election victory, and said, "you have my commitment to ensuring we have a productive term as we turn the page on a new era."

Sutcliffe had a message for supporters of McKenney and the other mayoral candidates.

"To the people who voted for Catherine and any of the other candidates, I want you to know that I have listened to your concerns and expectations throughout this campaign. I believe there is common ground for us and I promise to continue to listen. I promise I will be a mayor for all of Ottawa," Sutcliffe said.

This is the second time Ottawa has elected a political rookie as mayor, after Larry O'Brien won in 2006.

"Tonight we're going to celebrate. Tomorrow the hard work begins. We are facing many challenges, but I am filled, as I always am, with hope and optimism for our city."

"IT'S TOUGH AND IT'S DISAPPOINTING", MCKENNEY

McKenney spoke to supporters at their campaign headquarters after the votes were counted.

"This is not the result we had hoped for. It's tough and it's disappointing, but we are going to move forward," McKenney told supporters.

"Tomorrow we will get back up and keep working to create the city we deserve." 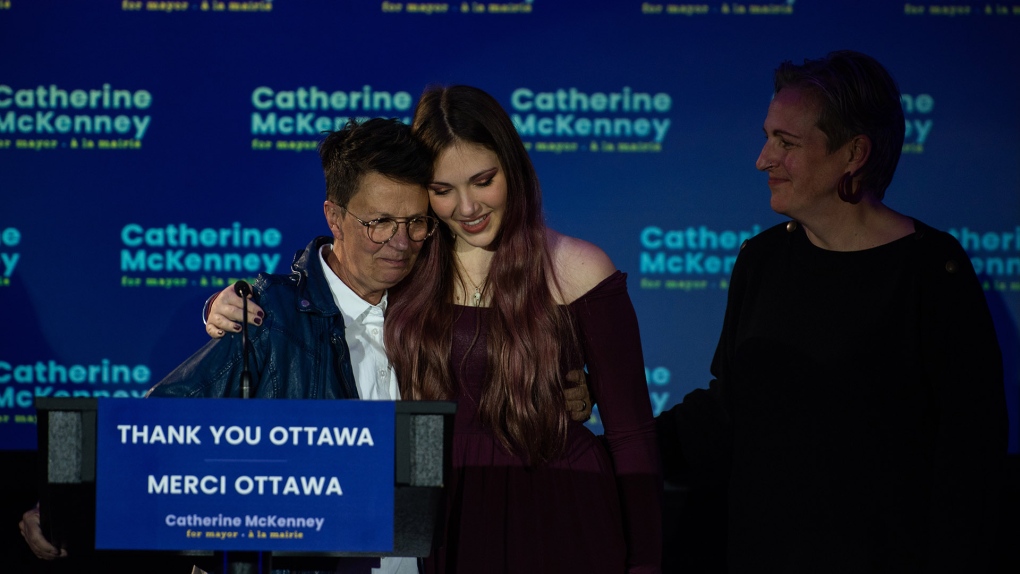 "The work of building a better Ottawa is never finished, and one night and one loss is not going to keep us down for long."

"Mark, I know you entered this race because like me you believe in this city and its potential, you want to make this city, bettering this city your full-time job and I have a lot of respect for that.

"I sincerely wish you every success."

Bob Chiarelli's attempt at a political comeback ended with a third place finish in the mayoral race.

Chiarelli, the former mayor and Ontario cabinet minister, received five per cent of the vote.

His campaign promises included capping property taxes at 2 to 2.5 per cent a year for the first two years of his mandate, finding at least $35 million in savings at Ottawa City Hall, freezing transit fares for all riders, spend $100 million over four years on roads and cycling infrastructure and building 100,000 homes over 10 years..

Other promises included at least three new dog parks in the suburbs and reducing recreation fees for children and youth by 10 per cent.

Sutcliffe's campaign released the 100-day plan for the first items he would address as mayor, including a line-by-line review of existing city spending, striking a task force to provide concrete recommendations for solutions for responding to mental illness and substance use disorder, and launch a task force to streamline and quicken the home-building approval process.

WHO IS MARK SUTCLIFFE

Sutcliffe has lived in Ottawa all his life. He is married to his wife Ginny, and has three children.

The 54-year-old is a broadcaster and entrepreneur, working as a talk show host on Newstalk 580 CFRA and 1310 over the years and writing a column in the Ottawa Citizen.

Ukraine on mission to ban Russia from Paris Olympics

Ukraine hopes to secure widespread international support for banning Russian and Belarusian athletes from the Paris Olympics due to Moscow's invasion, the sports minister said on Tuesday.