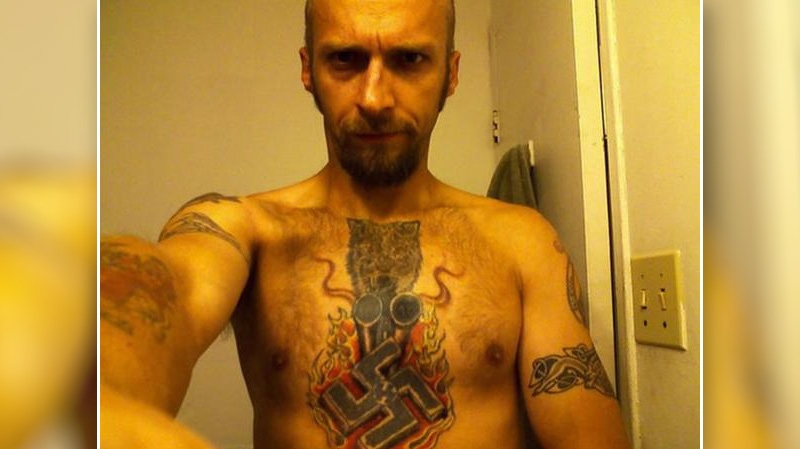 Kevin Goudreau, chairman of the group Canadian Nationalist Front, with a swastika tattooed on his chest is organizing a white supremacist rally in Peterborough, Ontario on Saturday.

A man with a swastika tattooed on his chest is organizing a white supremacist rally in Peterborough, Ontario on Saturday.

Kevin Goudreau, chairman of the group Canadian Nationalist Front, told Evan Solomon on the Bell Talk Radio Network that he is not a white supremacist--- preferring instead to be referred to as a white nationalist---- and that the rally is an anti-Trudeau, anti-illegal immigration rally.

Goudreau has a large swastika tattooed on the centre of his chest and there are photographs shared online of him giving the Heil Sieg, the Nazi salute.

When questionned about the tattoo and aligning himself with white supremacist and neo-nazi groups, Goudreau said his aim is to unite the right and stop immigration into Canada.

"I got [the tattoo] 20 years ago and it wasn't meant as anything to do with WWII Germany or anti-semitism. It was just a thing to -- I was idealistic. I wanted to take the symbol back," Goudreau told Solomon.

The Canadian Nationlist Front website links to groups and websites such as Stormfront, David Duke, and White Aryan Resistance, all known for their white supremacist beliefs. There is very little distinction between white supremacy and white nationalism.

When asked why he aligns himself with Neo-Nazis, Goudreau said "We may differ in methodology or ideology, but the basics is to unite the right wing to further our cause in the sense of preservation of the original demographics of this country."

"He's been in downtown Peterborough and he's been kicked out of bars here. he's assaulted people," Therrien told Solomon.

The City of Peterborough granted a permit for the rally to take place Saturday.

Many groups are calling for the city to revoke the permit to Canadian Nationalist Front for the rally, citing Canadian hate laws.

Friends of Simon Wiesenthal Center for Holocaust Studies issued a statement urging Peterborough's mayor and councillors to pull the permit for the rally on city property.

"There is nothing peaceful about white nationalists marching in public spewing messages of hate and intolerance," said FSWC president and CEO Avi Benlolo. "The mayor and city councillors must intervene to reverse this decision immediately."

Peterborough Mayor Daryl Bennett said in a letter that the city must stand together against racism and hate.

"The city is unable to deny an applicant the opportunity to hold a non-violent rally against immigration policies and the Trudeau government," Bennett wrote, "however, the city has notified the police of the event and they have informed the city that they will monitor the situation."

Several counter-rallies are being organized in Peterborough on Saturday.

Listen to the full segment here.