As COVID-19 cases soar in Kingston, Ont., officials are working to tackle the spread as quickly as possible, holding both a drive-through vaccine clinic giving out thousands of doses, and one of the province's only pop-up locations for rapid testing on Saturday.

Art McEwen and his wife got their shots Saturday. McEwen says the rising cases was a major factor for booking.

“The new variant and the fact that Christmas is shot,” he says. “So let's get it over with and get back to seeing family in the new year.”

As of Saturday, the health region has more than 1,200 active cases. KFL&A has the highest rate of COVID-19 cases in the country as of Thursday, being driven by the Omicron variant of concern.

Dr. Piotr Oglaza, the region's medical officer of health, says there is a sense of urgency to get residents a booster shot.

“A day like this, with 5,000-plus people, that's going to increase that average,” he says. “All the channels are being ramped up and that’s our best chance of getting those doses to as many people as early as possible.” 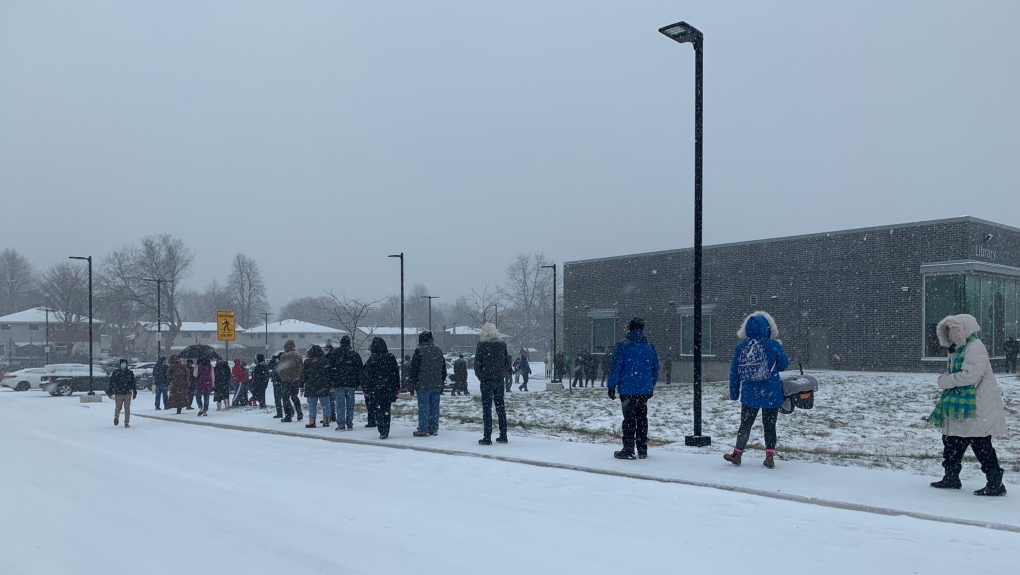 Meanwhile, across town at the Rideau Heights Community Centre, hundreds lined up before the doors opened for free rapid take-home tests that were being given out by the province.

Krystyna Gora says she waited more than an hour to get hers. She says she needed one after her son's workplace was involved in an outbreak.

“It's a great feeling,” she says of getting the test. “Just knowing that we're keeping each other safe is why we're doing it.”

The province says there were 1,000 packs given out throughout the day. It is one of the only community clinics set up this weekend outside of the Greater Toronto Area ahead of the holidays.

Still, some waiting in line felt dissatisfied with the roll out.

“I just wish they had set it up, set up the station in the parking lot so we didn’t have go to inside at all,” said one man.

“I know they’re trying to get this out as fast as they can, but the planning and the organization of it seems a little bit crazy,” said another.