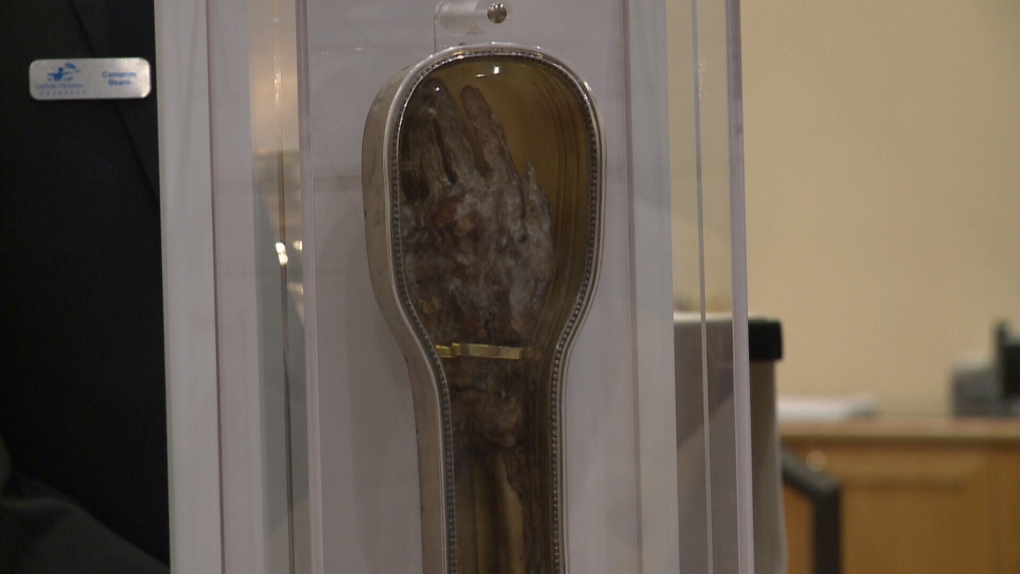 The severed forearm and hand of St. Francis Xavier, a Catholic missionary who died almost 500 years ago, is on display in Ottawa.

“It’s a very special opportunity to see a miracle,” says Karen Urlocker. She is among the thousands of people expecting to pass through the Sainte-Marie d’Orléans Parish Wednesday.

Caroline Cogan came with son Patrick. “I wanted to share this with my son who is 13 and going into that phase of life where there are lots of influences.”

St. Francis Xavier died in China in 1552, but his body did not decompose. The Catholic Church says the “incorruptibility” of Xavier’s body is a sign he was a saint.

The arm is normally kept on display at the Church of the Gesu in Rome, one of the first churches of the Jesuit Catholic order. This is first time the relic, which the Church considers sacred, has been put on display on Canadian soil.

D’Arcy Murphy is a University of Ottawa student. He took the semester off school to take on the role of Official Guardian of the Relic. He travels along with the relic. He says the experience has been life changing. “It’s been a real honour. It’s been excited and grace filled to see so many wonderful things in this past month.”

As many as 75,000 Canadians are expected to view it during the national tour. It was organized by the Archdiocese of Ottawa, the Canadian Jesuits, and Catholic Christian Outreach, a Catholic university student movement.