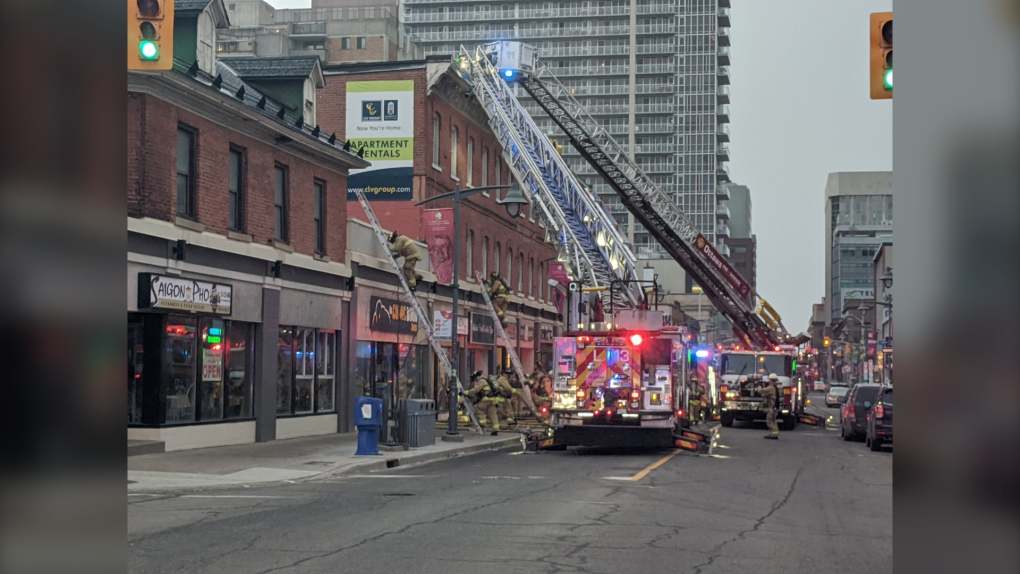 Ottawa firefighters battle a fire in a ground floor business in a building on Bank Street. (Photo courtesy: Twitter/OFSFirePhoto)

There are no reports of injuries following an evening fire in a commercial building on Bank Street.

Ottawa fire received a 911 call reporting a fire in a commercial unit on Bank Street, between Nepean and Lisgar Streets, just before 7 p.m.

"The main body of fire is knocked down. Overhaul and salvage operations in progress," Stilborn said on Twitter.

Ottawa fire said in a media release that firefighters faced smoke when they entered the building.

"Upon arrival of further crews, smoke was apparent coming from the brick and eaves of the multi use structure, and a second alarm was declared," Ottawa fire said.

Flames were later spotted on the second storey roof of a building, prompting officials to declare a third alarm.

The fire was declared under control just before 8 p.m.

An Ottawa Fire investigator has been called to the scene to determine the cause of the blaze.

Residents living in the building have been allowed to return home.

Ottawa Fire on scene of a 3-Alarm fire on Bank ST between Nepean & Lisgar STs. Fire is in a ground business in a 3-storey mixed use row. The main body of fire is knocked down. Overhaul and salvage operations in progress. No reported injuries. #ottnews #OttFire #ottcity pic.twitter.com/XIF7uLFvzd