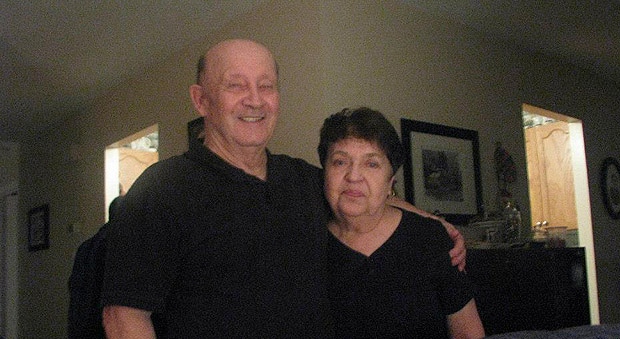 John Gervais and his wife in happier times

The family of a dying war vet is demanding the Gatineau Hospital fire an orderly after a conflict over language and care last weekend.

77 year old John Gervais came to the Gatineau hospital over the Thanksgiving weekend.

He arrived at the emergency department a shadow of his former self; a robust veteran of the Royal Canadian Navy, in search of answers and compassion. But Gervais’ family says that is not what happened.

Last Saturday night, Gervais’ wife and daughters, who were by his side, caring for him, had asked an orderly to help take Gervais to the washroom.  They were surprised by the young orderly's aggressive attitude, after a liquid spilled on the orderly’s shoes.

Gervais’ son-in-law, Steve Long, says the orderly barked in good English “this is not a hotel,” and pulled back the curtain around John Gervais’ bed.

Steve Long's mother-in-law called him on it.

“Mrs. Gervais said that's a horrible way to treat somebody,” says Long, “you shouldn't treat sick people like that.

Long says when he got to the hospital minutes later, the tension in the Emergency Department was palpable. He says the orderly immediately confronted him.

“The guy was staring at me, you know what his intent is. “If someone does that on the street or in a bar, you worry you're going to get into a fight,” recalls Long, “That's what it was like in there, in the emergency room with my father in law and his family watching.”

When Long asked to speak to his supervisor, he says the orderly told him he was Quebecois and to speak French -- the third time he had repeated that.

“He showed lack of compassion and hostility towards a fellow who was very sick, couldn't stand, 77 years old, a 75 year old wife. He should not be working in the hospital.  I want to see him fired.”

The family has filed a complaint with the hospital and the ombudsman is currently looking into it but it could take up to 45 days for any resolution.

Late this afternoon, though, the Human Resources Department met with the employee and suspended him until that investigation is over.

"We have 6500 employees,” says Sylvain Dube, with the Centre de Sante et de Services Sociaux de Gatineau, the agency responsible for the hospital, “and from what I know, it's the first complaint we received about an English patient that couldn’t' have the service in English, the first time.”

Steve Long says that's true; the rest of the staff has been great but this incident has left them shaken.

They’ve been married over 50 years; they're the love of each other’s lives. It’s a tough time and it's horrible to have an incident like this hanging over it.”