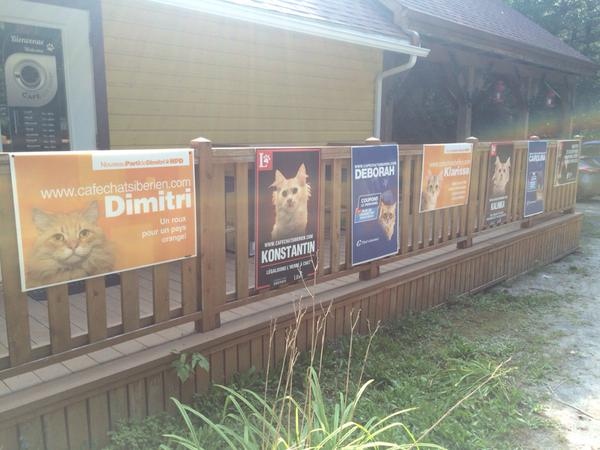 Signs in Chelsea that will make you paws

An original advertisement campaign by a new business in Chelsea, Quebec, is stirring debate among residents and the municipality.

On Friday, election-themed cat ads were posted along Chelsea's main drag as a way to drum up business for the Café chat Sibérien, a cat cafe that opened only six weeks ago. Construction has been difficult on many local businesses in the area, and the cafe wanted to find a way to stand out.

"The cat cafe is different, so we needed a different type of advertising," said Michael Lebrun, one of the store's owners.

So, while driving down the highway, Lebrun came up with the idea to make his seven cats the stars of election-like posters. There's Dimitri, the leader of the National Dimitri Party, Kalinka with the Liberal's Team Sibérien, and Deborah the Conservative cat who wants to give voters more crackers.

"We just wanted to bring something new and we figure this is something new," said Lebrun. "It's nothing bad about the parties."

Although the ads are popular among many residents, the city's Mayor said the signs will have to come down next week. There's a By-law in Chelsea that limits how businesses can advertise, and these posters don't comply.

"The owners know that they will have to take them down," said Chelsea's Mayor Caryl Green.

"It was something that gave a certain fun to the whole long weekend, but we have to enforce the by-law because we can't have signs everywhere, on every pole."

Businesses along Chelsea's main drag can only advertise on their own property, although that by-law has been relaxed during construction.

'We perfectly understand the reason they do that. I'm not upset. I'm not angry," said Lebrun, who said he hopes customers will take the signs home as a souvenir.

So, how are the politicians taking the signs? They love it.

Liberal candidate Will Amos said the signs are funny.

"Good for businesses for taking advantage of an over-saturated political market. People are looking for something different and roadways are covered with political advertisements, so why not turn it into something fun," Amos said.

In a similar vein, Conservative candidate Benjamin Woodman tweeted that the signs are "hilarious," adding that "Deborah looks like a strong cat-i-date."

As for the cat cafe, they call this campaign a success and look forward to holding purr-fect election-related cat events.