Eastern Ontario tornado: The story of the man inside this truck

Among the scenes of devastation caused by the EF-1 tornado that touched down in eastern Ontario on Sunday was the image of a white truck on its side.

It was just one scene among many, with video captured by a CTV News Toronto helicopter showing downed trees, destroyed homes and barns, and debris spread across the community of Actinolite, Ont. in the immediate aftermath of the storm. 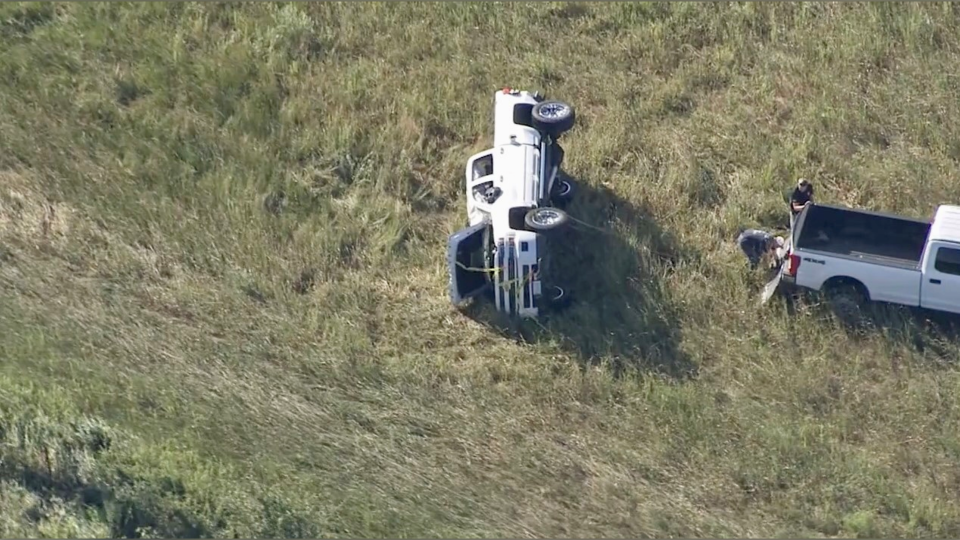 But it was the truck that caught the attention of Tweed, Ont. mayor Jo-anne Albert during an interview on CTV News at Six.

“That truck you just saw in your newsreel was my grandson,” Albert told chief anchor Graham Richardson. “So yeah, it’s been an awful day and an awful night.”

Brandon Albert tells CTV News that he was on his way home when the storm hit. He was driving on Highway 7 through heavy rain with almost no visibility, and said flying rocks were hitting his truck as he approached Actinolite.

He stopped, and that was when his truck left the road.

“Next thing you know, you could just feel this huge gust of wind and it basically threw me right into the field across the highway to the left,” he said in a phone interview.

“I was definitely thrown through the air. I was probably about 80 or so feet off the road,” he explained. “The person I know who was behind me said my truck definitely hit the power lines. I was as high as the lines.”

Albert said he was hurt in the landing but feels “pretty lucky” to have survived.

“It happened very fast, obviously, and I would have never guessed my full-size truck would have got thrown off the road, but it definitely did,” he said.

Researchers have given the storm a preliminary rating of EF-1, with peak winds nearing 175 kilometres per hour.

Albert says he believes it was stronger than that.

“I don’t expect just any sort of wind is going to blow the truck off the road or pick the truck up and take you all the way across the road,” he said. “It threw me right across the road… The last thing I remember, I was from a dead stop and I got thrown around in the truck and landed and I was in the field.”

Albert said his friend, who was following behind him, was spun around by the wind and his vehicle was damaged.

“It actually broke the wheels off the car. He ended up staying on the road, but he was spun right around the opposite direction. He couldn’t move. He was just stranded right in the middle, but he was okay, he has no injuries,” Albert said.

He said some friends have compared his situation to the movie “Twister.”

“It seems honestly still very crazy. I would never have guessed that would happen,” he said. “I don’t want to say right place at the right time, but I guess that’s what it was.”