Dump truck hits an overpass and a gadget to protect against viruses: Top stories this week in Ottawa 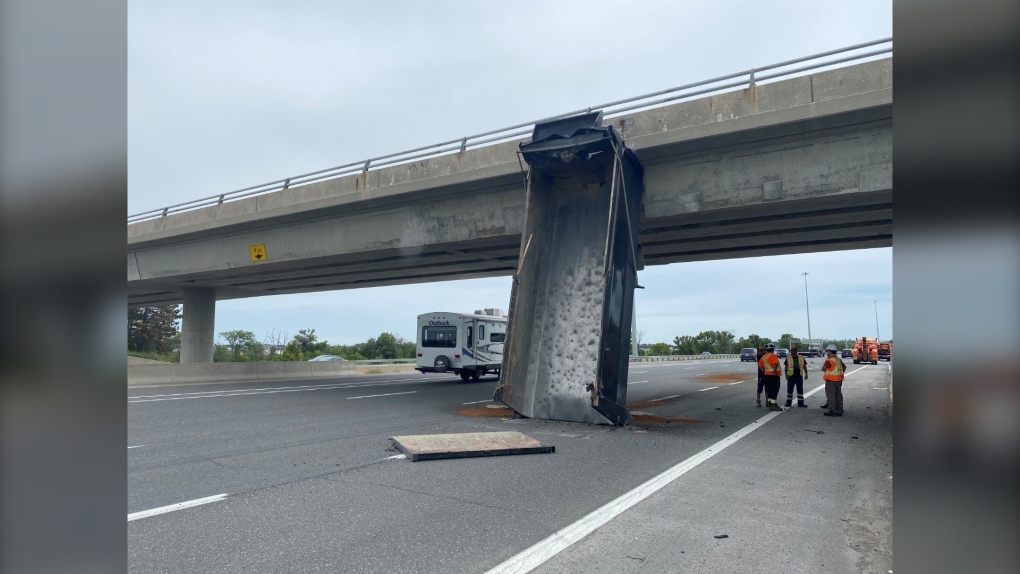 The dumper bed of a dump truck rests against the Queensway overpass at Palladium. (Photo courtesy/Jeremie Charron/CTV News Ottawa)

OTTAWA -- Ottawa's top doctor says Halloween will not be normal this year, an Ottawa man develops a gadget to protect against germs, and a truck with a raised dump box slams into a highway overpass.

CTVNewsOttawa.ca looks at the top five stories of the week.

Just after 11 a.m. Thursday morning, CTV Ottawa and Newstalk 580 CFRA began receiving photos of what appeared to be a dump box wedged under a Queensway overpass.

Ontario Provincial Police say a truck travelling at close to 100 kilometres an hour, with its dump box raised, struck the overpass on Hwy. 417 at Huntmar Drive. The dump box became wedged under the bridge, while the rest of the vehicle stopped about 100 metres down the road.

It took crews nearly four hours to remove the box from the highway.

The OPP says the 53-year-old man driving the truck was charged under the Highway Traffic Act with careless driving. 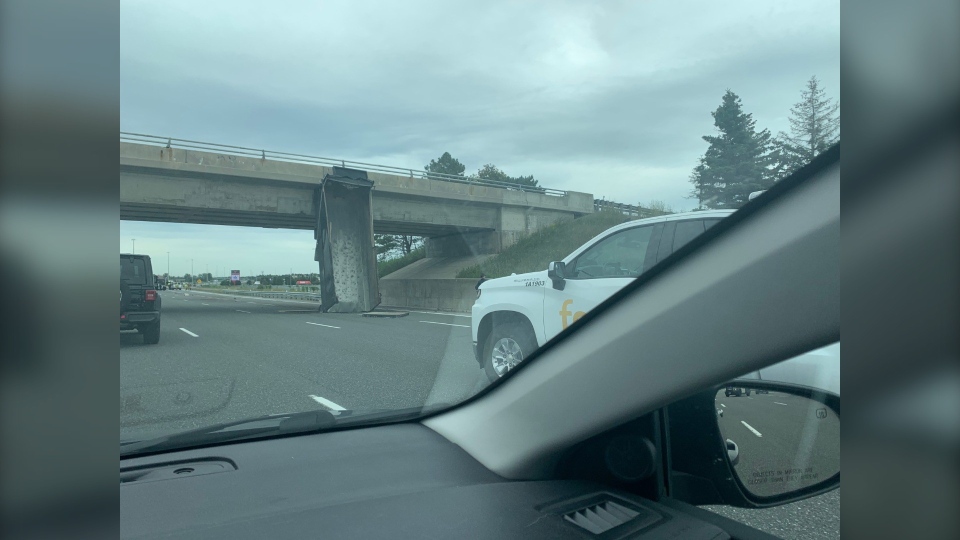 No trick or treating: Ottawa's top doc says Halloween will not be normal

Ottawa's top doctor suggests you will not be seeing ghosts and goblins roaming the streets of Ottawa trick-or-treating due to COVID-19.

Seventy-two days before Halloween, Medical Officer of Health Dr. Vera Etches told CTV Morning Live it will not be business as usual on Oct. 31.

"I don't think so. If normal means going door-to-door and touching things that other people have touched. I think we're going to have to be creative," said Dr. Etches on Thursday.

"People love to dress up: those aspects of Halloween are very much doable. It's the coming into close contact with others we'll need to rethink." 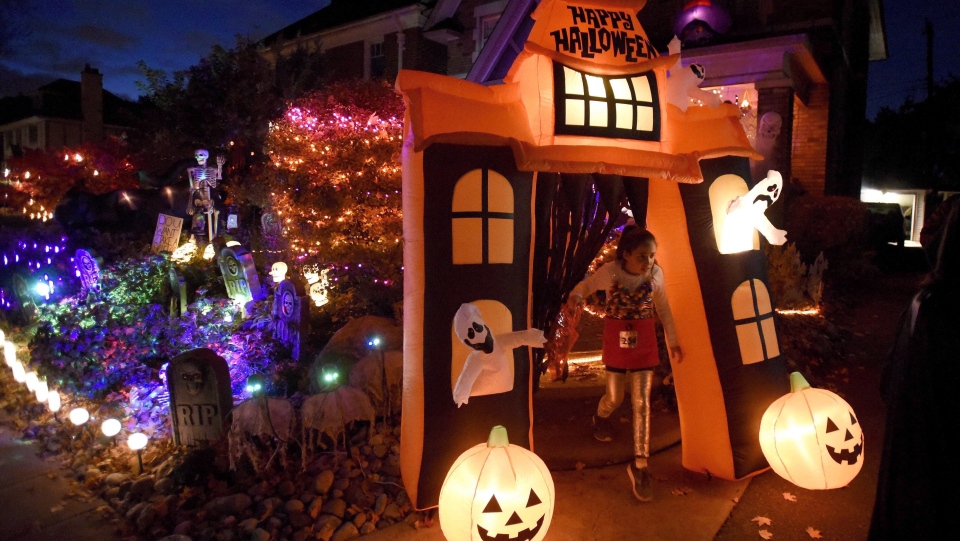 Advocates for recipients of Ontario's Disability Support Program demanded an apology from Premier Doug Ford for comments made earlier this month, and called for an increase to monthly payments under the program.

On Aug. 6, Ford was asked why a $100 pandemic relief top up for ODSP recipients was coming to an end. Ford said his goal was to support all Ontarians, but then claimed that people on the disability program were making more money than they were pre-pandemic.

"Here's a certain group that are collecting ODSP that have part-time jobs, and if they keep the CERB going and their part-time job, they're actually up a few hundred dollars – not down. But I understand people are struggling. I get it," Ford said.

The premier said the "best way" to help people on ODSP and Ontario Works is to "help them get a job."

On Twitter, NDP MPP Joel Harden said he was "sickened" by Ford's comments, and demanded he apologize.

With back to school fast approaching, the Eastern Ontario Health Unit's top doctor is urging people not to panic about the possibility of new cases of novel coronavirus this fall.

Medical Officer of Health Dr. Paul Roumeliotis told CTV News at Six on Sunday that Ottawa and eastern Ontario are prepared for a possible second wave of cases. He added it's important for everyone to do their part "collectively" to limit the spread of COVID-19.

"As long as we're able to do that, which I know we can, I believe that just because the odd case here, the odd case there – and sometimes you have more cases one day then the other – as long as the trends are in the right direction and stable I think we're going to be in a very good position."

On Wednesday, Ottawa Medical Officer of Health Dr. Vera Etches told Newstalk 580 CFRA that over half of the new cases in Ottawa in August were linked to households that already had confirmed cases.

"It is a hard infection to stop completely because people are infectious two days sometimes before they know they're sick. So imagine living in a household and someone gets sick, they may have already exposed other people in the household."

A small aluminum device could be the tool to help you avoid germs during the COVID-19 pandemic.

Ottawa machinist Troy Crosby has invented "The LINC," that can be used to turn on lights, press buttons and can open doors with a round-style knob thanks to a durable rubber insert.

The LINC fits in your hand to reduce contact on surfaces. For added protection, there's an anti-microbial coating to help eliminate picked up viruses.

"Any step we can do to eliminate the germ transfer is a step forward to getting us living normally," said Crosby.

For more information about the LINC, visit www.lincedc.com 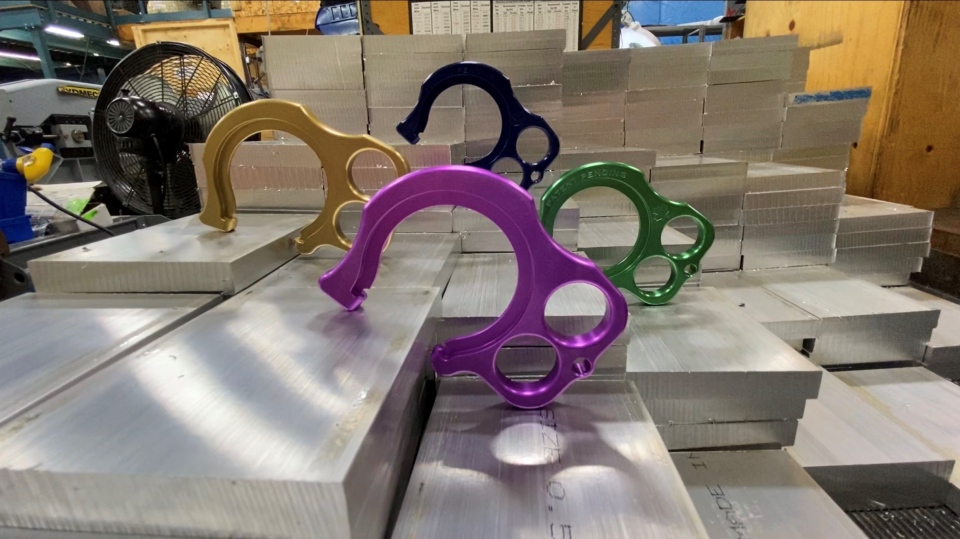 Finally, the feel good story of the week.

This week, Fraser shared a personal message he received from the Raptors president to lift his spirits.

And @journorosa asked Masai if he would be interested in recording a little “hey, you’ve got this, dude!” video for me, because she is amazing.

And what Masai did, blew me away. Here is the message he had for me. pic.twitter.com/3jUSD8Xumk

"Hi Brian, what's going on? I heard you've been a warrior," said Ujiri in the message recorded in June.

"I just wanted to send you a message not just from me but from the whole Raptors family. We're wishing you the best of health. Stay strong. You are going to beat everything you are fighting."

Ujiri invited Fraser to a future Raptors game as his personal guest. 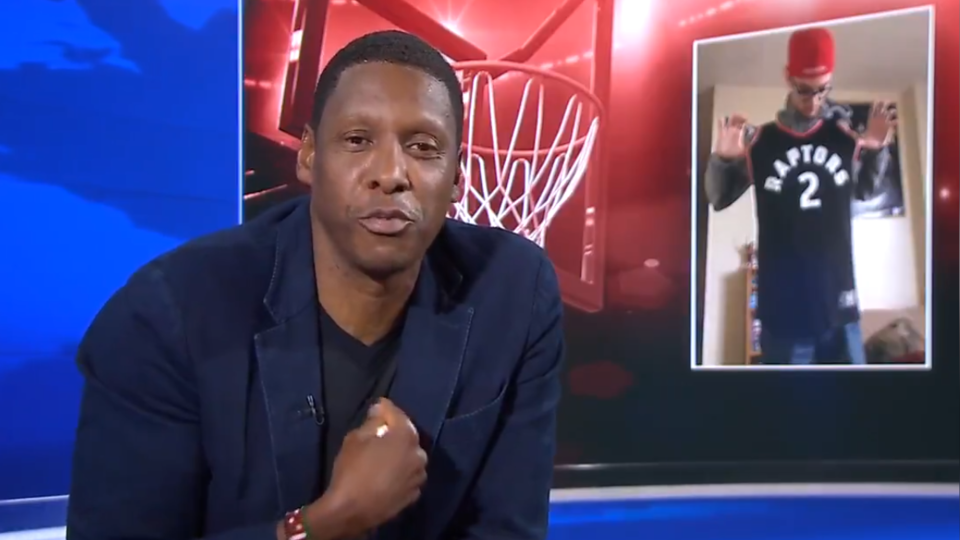