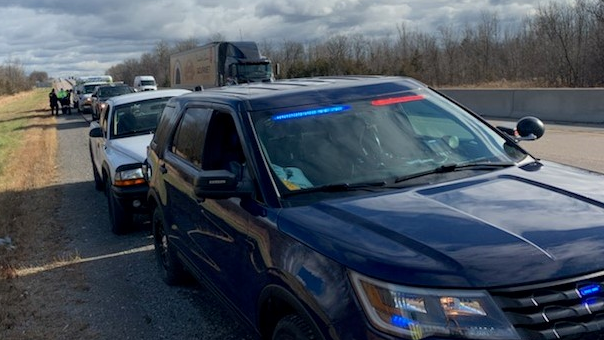 The OPP says a vehicle was stopped for unauthorized licence plates on Highway 401 in Napanee on Tuesday. (Photo courtesy: OPP_ER)

OTTAWA -- A 22-year-old driver is facing charges under the Quarantine Act after Ontario Provincial Police say they claimed to have COVID-19 in an attempt to avoid a traffic ticket.

Officers stopped the G1 licenced driver of a truck on Highway 401 in Napanee, near Kingston, on Tuesday. An OPP spokesperson tells CTV News Ottawa the vehicle was stopped because of unauthorized licence plates.

In a message on Twitter, the OPP said the driver recanted the COVID-19 claim when the officer called paramedics to the scene.

The driver is facing charges under the Highway Traffic Act. The OPP tells CTV News Ottawa the driver is also charged with Obstruction of an officer under the Quarantine Act for making a false or misleading statement to an officer.

The OPP says the driver of the truck is 22-years-old, not 32 as previously reported. The story has been corrected.