OTTAWA -- An Ottawa LRT car caused damage inside Tremblay Station and along the tracks stretching back to St. Laurent Station before it eventually stopped west of Riverside Drive last month.

The Transportation Safety Board released new photos showing scrapes from the LRT car along the north side platform and displaced rail tiles inside Tremblay Station, plus "impact marks" at sporadic intervals on rail ties, rail clips and clip holders along the tracks to the previous station caused by contact from an "undetermined component" of the vehicle.

The TSB is still searching for the cause of the Sept. 19 derailment that has shutdown the Confederation Line for the past two-and-a-half weeks.

In a report released on Thursday, the TSB said the LRT car "derailed near the middle" of the north platform at Tremblay Station at approximately 12:15 p.m., but no issues were observed as the train entered the station or departed.

The train approached the east end of Tremblay Station at about 35 km/h and was brought to a controlled stop within the station. 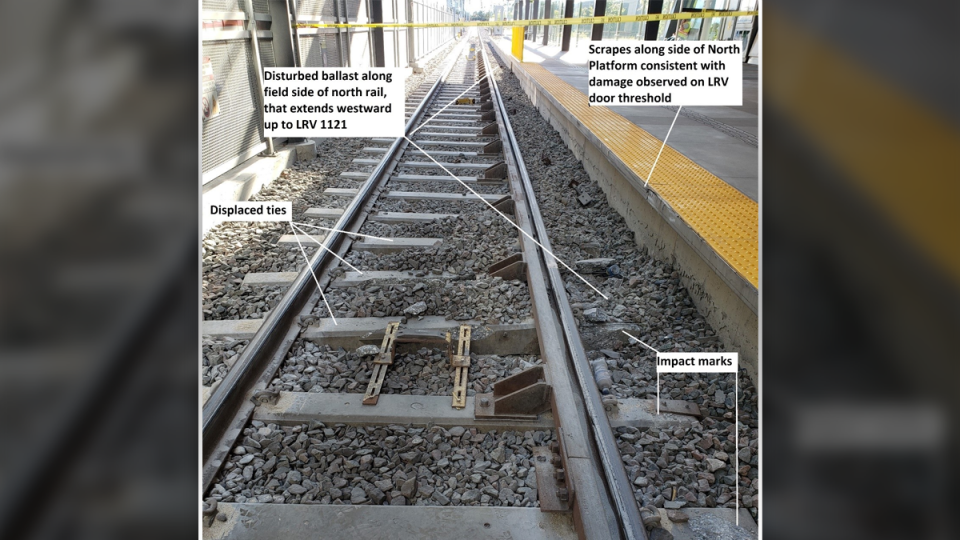 TSB investigators conducted a walking inspection of the track from the derailed LRT car, eastward to St. Laurent Station.

"The ballast was disturbed all along the north side of the track 1. The derailed LRV had contacted and destroyed a signal mast and switch heater that were adjacent to, and north of, track 1," said the TSB. "The track adjacent to the signal had buckled as a result of the derailment and was not considered as causal."

Ballast is heavy material, such as gravel, iron or lead, used to form the bed of a railroad track. 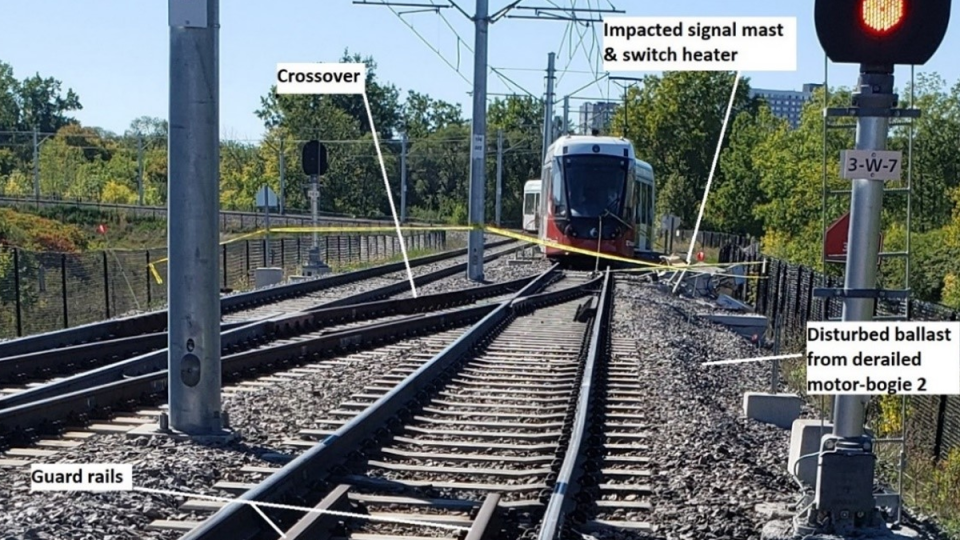 The LRT said the ballast along the field side of the track was disturbed for about 1,400 feet, up to near the middle of the north platform within Tremblay Station.

"The disturbed ballast extended up to and alongside the north platform of Tremblay Station terminating near several displaced ties near the middle of the platform," said TSB.

"Scrapes were observed along the side of the North Platform at Tremblay Station. The damage was consistent with similar damage observed on the north side passenger door threshold just above the motor-bogie 2 location of LRV 1121." 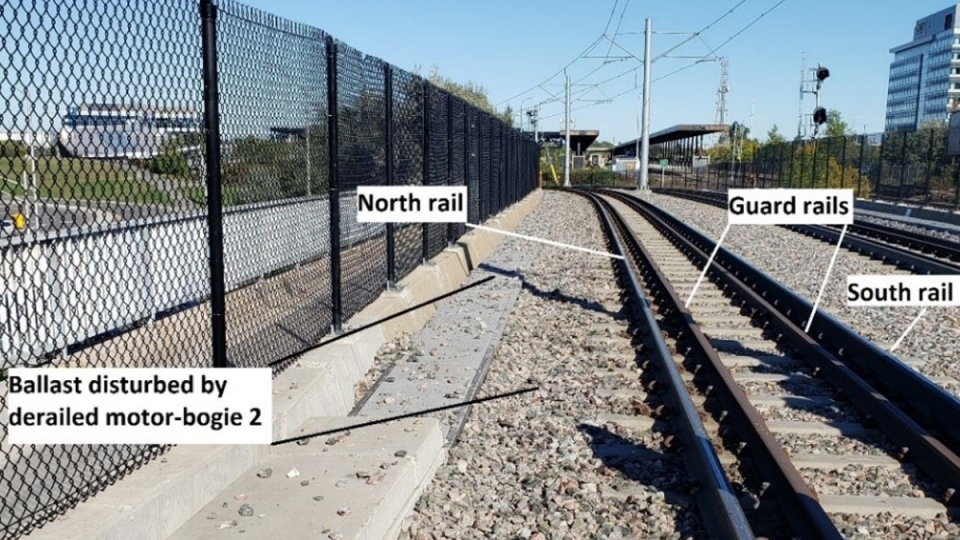 "The frequency of the impact marks increased slightly approaching the east end of Tremblay Station," said the TSB. "The impacts observed were consistent with some form of mechanical damage likely resulting from contact with an undetermined component from LRV 1121."

The derailed wheels sheared off bolts on the rail joints along the LRT track.

The next steps in the investigation include examination of all components and wreckage of the train, an examination of the LRT car and review information received from OC Transpo and Rideau Transit Group.

Rideau Transit Group said on Sept. 20 that it could take three weeks to repair the damage and resume LRT service. Coun. Allan Hubley, chair of the transit commission, told CTV Morning Live Thursday morning that he didn't have a date for the resumption of service, but it would be weeks and not months.