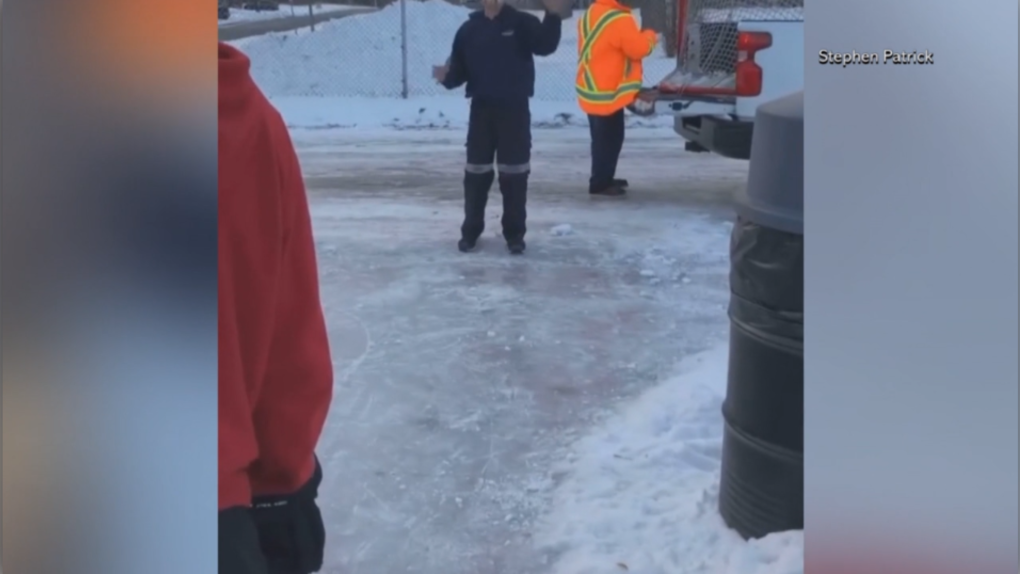 A screenshot of the video of a confrontation with a city employee at Cornwall's Reg Campbell Park, posted to social media by Stephen Patrick. (Image: Stephen Patrick / Facebook)

CORNWALL, ONT. -- A Cornwall city councillor says a city employee who was involved in a heated confrontation with some young people playing hockey at a local rink will be disciplined, but will not be fired.

The incident began Wednesday, when Skyler Walker, his friends, and one of his teachers were shooting pucks at a net on the ice at Reg Campbell Park.

Team sports are prohibited under the provincial government's current provincewide shutdown, which has been in effect since Dec. 26, 2020.

Walker said, as he went to pick up the pucks, a woman began shouting at him to leave the ice.

"She began recording us and yelling at us."

Walker said a city employee was called in, which led to a confrontation.

"He told us he'd melt the effing ice," he recalled.

A 35-second video of the confrontation was posted to social media later that day.

Cornwall City Councillor Justin Towndale posted about the confrontation on his Facebook page on Friday.

"The City has investigated, and the employee will be disciplined for his language. He will not be fired, nor should he be. I don’t agree with the language he used, but I understand why it got to that point. The video doesn’t tell the whole story," Towndale wrote.

Towndale pointed out that hockey games are prohibited and nets should not be on the ice under current health guidelines. He said the employee, who had been maintaining the rink, claimed there was some verbal harassment before the video began that targeted his family.

The councillor made an appeal to empathy.

"It’s hard for everyone right now and I understand that. The restrictions have been causing a lot of issues, and tensions are high as evidenced by this event. However, again, please see the other (unseen) side," Towndale wrote.

Walker says he does not plan to return to the ice at Reg Campbell Park.

"I have a plan to build my own backyard rink," he said. "I really don't want to deal with that again."

With reporting from CTV's Shaun Vardon.