Curling might be one of Canada’s favourite sports, but there’s a new one trying to break the ice.

It’s called "ice stock" and it’s described as a combination of curling and bocce ball.

It originated in Germany and is considered more popular in Europe, with the sport dating back longer than curling.

Still, there’s been a growing interest in the sport in Canada, with a well established team in the Kingston area seeing its membership grow. Ten members are preparing to represent Canada on the world stage in just a few weeks at the world championships in Italy.

With the latest rounds of COVID-19 restrictions in place, fans say it’s the perfect time to give it a try.

With rocks sliding across the ice, knocking whatever is in their path, a passerby may be forgiven for thinking this is some unusual version of curling, but it isn’t. It’s a sport all its own.

Teams of four compete against one another. Stones are thrown by hand down the ice, to hit as close to a puck-like target as possible in order to accumulate points.

At the end of six rounds, the team with the most points wins. 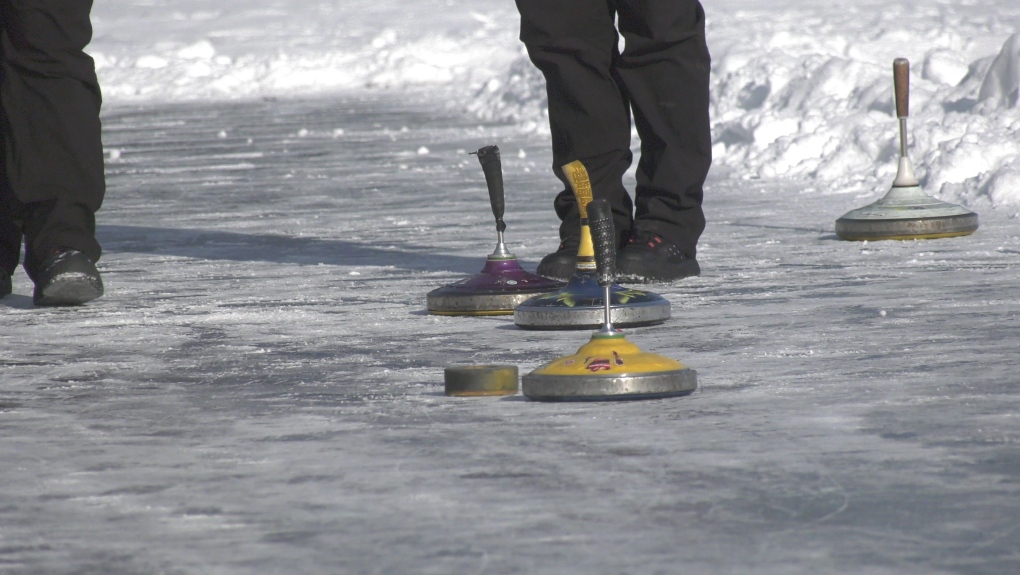 In ice stock, teams of four compete against one another. Stones are thrown by hand down the ice, to hit as close to a puck-like target as possible in order to accumulate points. (Kimberley Johnson/CTV News Ottawa)

Unlike curling, there are no brooms or sweeping and the stones are much lighter, allowing people to throw them.

Chris Hammer, with the South Frontenac Stock Sports Club, says another big difference is that the target moves.

“You’re basically chasing that puck. But wherever that pick goes, you've got to get those points to get it.”

The South Frontenac Stock Sports Club started up in 2013 and has been growing since.

There are also teams in places like Kitchener and Barrie.

Hammer says that’s because the sport is good for all ages and abilities.

“This is a game where you can play with four or five or less than 10 people and have a good time,” he says. “It’s not physical. It’s for male or female, older or younger, anyone with a disability. The game is to have fun but you can play in a competitive way.”

There are different sized stones, for different needs, explains Hammer.

Rebecca Smith picked it up during the pandemic. With physical distancing and the ability to easily play outdoors, she says it’s a perfect sport for the times.

“I just really fell in love with it because I found it was a super inclusive sport,” she says. “And although I’m athletic in general, it was easy to catch on and play at a competitive level.”

While you may want to bundle up while hitting the ice to play, Paul Blais, who is a board member with the Canadian Ice Stock Federation says, it’s a year-round sport, and is played on pavement in the summer.

Blais says even though it appears to have fancy equipment, he insists it’s not an expensive sport overall and there are ways to get started.

“Anybody who comes along to play for the first time, we have equipment they can borrow, with no obligation of investing in their own equipment,” he says.