If five years ago, you made a move to the towns of Arnprior or Almonte, that would be described as a very good move.

Since 2017, home values have risen 219 per cent in Arnprior. In Almonte, the five-year price increase is 160 per cent.

Bennett has been in the business for more than 40 years and describes the pricing increases across the region as unprecedented and mind-blowing.

“A lot of it is perpetuated by the millennials.  They’ve saved more money during the pandemic,” she said. “The low interest rates and definitely the ability to work remotely is driving all of this.”

Bennett says people are looking at owning larger lots and more property. And she says COVID has had another influence.

“We’re seeing a lot of intergenerational home-buying too because people are now worried about long-term care facilities and aging in place.”

Bennett says the Ottawa market and pricing, even with the staggering increases, are still attracting many Toronto buyers.

“If you look at the Toronto market, we’re getting a lot of Toronto buyers. The average price in Toronto right now is $1.8 million. $837,000 is the average price of a home in Ottawa. That’s a $1-million difference.” 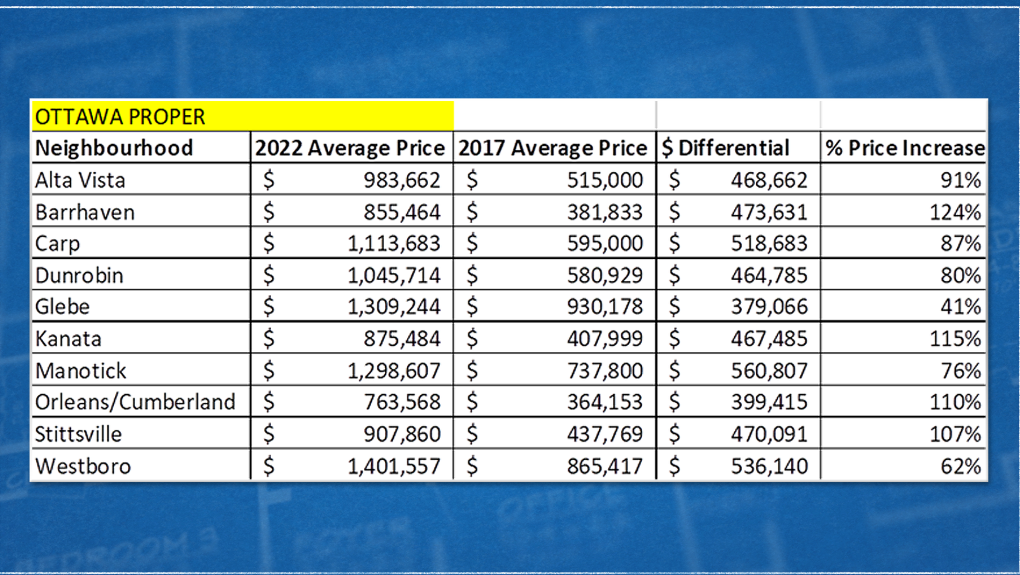 Travel east to the Orleans and Cumberland area and your five year increase in value is about 110 per cent.

Farther east in Hawkesbury, Ont., there was a 40 per cent increase in home values from February 2021 to this year.

Throughout this region there has been historically low inventory on the market.  Bennett sees some hope of that changing.

“The number of new listings in February is 1,762, offering a glimmer of hope for buyers. Listings are up 12 per cent, year-over-year since February 2021.”

You may need to sit down when you read that 21 per cent of all residential homes sold in Ottawa are more than a million dollars.

If that makes first time buyers feel they have been totally priced out, Bennett says they shouldn’t be discouraged.

“Interest rates are still very low. We’re saying to people who may be baby boomers—‘Hey this may be time to cash out, maybe you have a cottage that you want to winterize or maybe some people are moving back, I don’t know, to the Maritimes.’ We are seeing that going on.”

They are the most fiercely polarizing issues in American life: abortion and guns. And two momentous decisions by the Supreme Court in two days have done anything but resolve them, firing up debate about whether the court's Conservative justices are being faithful and consistent to history and the Constitution – or citing them to justify political preferences.

Russian forces were trying to block a city in eastern Ukraine, the region's governor said Saturday, after a relentless assault on a neighboring city forced Ukrainian troops to begin withdrawing after weeks of intense fighting.

Man arrested after four people violently attacked by his dog in Toronto: police

A suspect has been arrested after he and his 100-pound dog allegedly attacked four people overnight, Toronto police say.