Spencerville community rallies to help those affected by recent fire

SPENCERVILLE, ONT. -- When Jason Higginson saw flames across the street from his home last Friday, he jumped into action.

"I got off work late and was about to head to bed and have a little snack and I looked out my window and I saw flames," Higginson said. "I went right out across the street and hit the two doors to see if anybody was inside. There were two people outside; I didn't know who they were. I was one of the first responders." 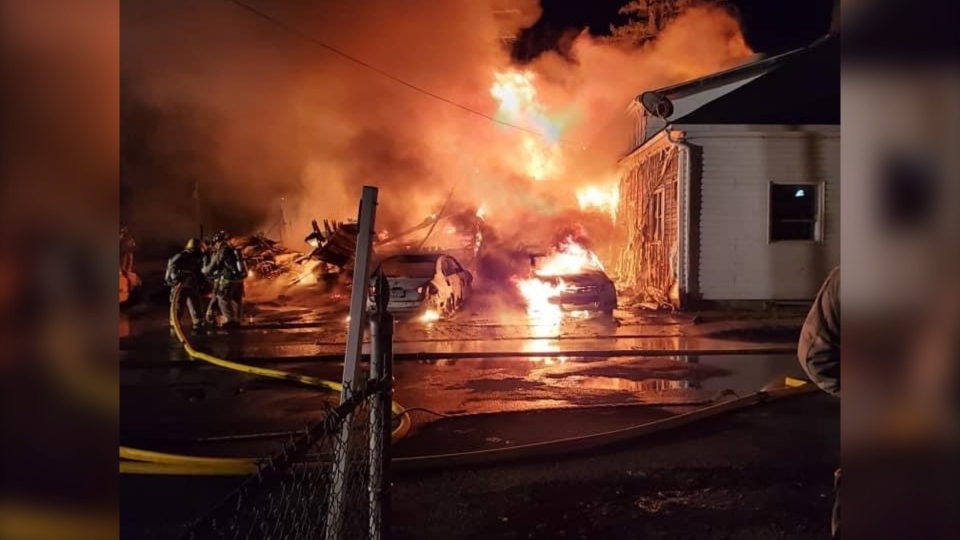 "It started small and then pretty much after I knocked on both doors the flame grew exponentially. It was unbelievable," Higginson added.

When building owner Joe Moulton arrived minutes later, he helped save all the family pets.

"I ran in and got the cats out of the house and the dogs out of the other ones for them," Moulton said. "Once everybody was safe then it's just a matter of stay out of the way and let the real heroes do what they do."

Over a dozen fire trucks and around 35 firefighters helped fight the fire through Friday morning. The building is a total loss.

According to Moulton, the fire is believed to have started in the garage, but the exact cause is still under investigation.

"There's an engineer looking at the boiler. We don't know if that's the cause or not," Moulton said. "We know it started in the garage but what started it, there's very little electrical in there, there's nothing plugged in as far as tools, pretty limited as to what could have caused the fire so they are looking at that and we just wait to see."

Moulton lost his business, Joe Computer. A second business, that only opened two weeks ago, Trinkets, was also destroyed.

Two families have now been displaced.

"They are a couple of good families and luckily they are safe," Moulton said. "They are doing well. One of them works for me so I see him every day. It's a big family, five kids, so they are split up across his parents and her parents, so they are not together, which makes it even harder now, of course."

He said the problem now is finding affordable housing for the families. Moulton says he plans to rebuild on the same site.

"We're in such a shortage of affordable housing right now that rent has gone sky high. It's crazy what it costs to buy a house right now, so I'm worried about that," Moulton said.

"If we can get apartments in here where people have a place to live that's not a crazy price that's my goal. That was the goal all along, was to provide reasonably affordable housing," Moulton added.

Donations have now poured in from across the community.

"I have to excuse myself I'm a little overwhelmed of the response from the people in this town and surrounding community," Higginson said. "It's been unbelievable."

Higginson runs the SpencerCity Bar and Grill, which has now become a drop-off location.

"We use the restaurant as a focal point to drop off food and donations and it was just non-stop, unbelievable. Cash donations, cheques, frozen foods, and clothing of all sizes for every single child and adult," Higginson added. "Half a restaurant full of cases and boxes and bags of clothing."

Rebekkah long knew one of the families and also set up a go fund me page and collected donations.

"My whole kitchen was packed; my whole living room. Basically, my whole house was like I was moving out and I felt the need to raise money for people in a hard spot like that," said Long, outside of her Prescott home.

"The community is amazing. There have been people who have just put envelopes on the counter and said, 'Here, give this money.' There were piggy banks given to all five of the children with 100 dollars in it," Long added.

"(It) just makes me happy and I know if it was my case they would probably be there for me too," she added. "Jason has raised quite a bit of money and has given it to me in cash and I have already given it to the family."

Long said the family is hoping to stay in Spencerville because they love the area.

"I'd like to thank everybody, honestly. They have just been so wonderful to support these families," said Moulton. "The messages I've got from people saying, you know, 'sorry for your loss, let me know if I can help', people I'm sure would just show up like an old barn raising and help us fix this if they could."

"It's just an amazing community and I'm so proud to be part of it," added Higginson.

An online comedy fundraiser is happening on Wednesday evening to help the victims, and a list of links to help donate can be found below.

To support the Morasse family: https://ca.gofundme.com/f/help-josie-and-jacob-after-fire-took-everything