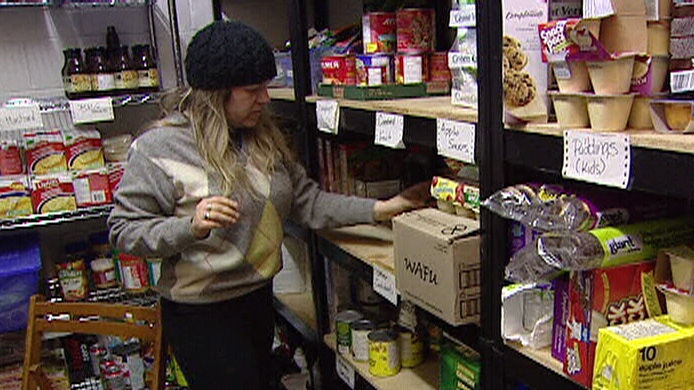 Thousands of families in Eastern Ontario are choosing tonight between food and heat. Skyrocketing propane and hydro prices are forcing people to turn to food banks to help them survive.   Lesley Johansen helps out at this rural food bank in Dundas County.  She sees the increasing need, even feels it first hand as her hydro and propane bills rise well beyond her ability to pay.

"It's come down to whether I don't make a car payment or I don't eat,” says Johansen.

For first time in her life, this very proud educated woman is considering turning to the food bank for help.

"I don't want to be in this position in my life, I’m 40 years old. I’ve worked hard but the system fails.”

The system is failing a growing number of people.  1,372 families turned to the House of Lazarus Food Bank in Mountain last year.  That's more than a 10 percent jump over the previous year.

Pauline Pratt is the Executive Director of the House of Lazarus, “The heating costs are taking up more money than what's coming in,” she says. “Clients are very discouraged and feel very helpless and powerless because they have no choice; they have to have heat.”

Propane prices have doubled since October.  In many rural areas, hydro bills are higher than mortgage payments.

“In 64 years of my long life, this is the worst I’ve ever seen it and it's not getting any better,” says the Mayor of North Grenville.  David Gordon says high utility costs are creating an urban-rural divide and pushing many of his residents below the poverty line.

"If you can't afford your hydro and your heat, how can you afford your mortgages?  I can see people losing their houses over this.”

Lesley Johansen is planning to move out of her apartment and back in with her parents.  She says, sadly that scenario is playing out way too often now.

"People are one paycheck away from bankruptcy,” says Johansen.