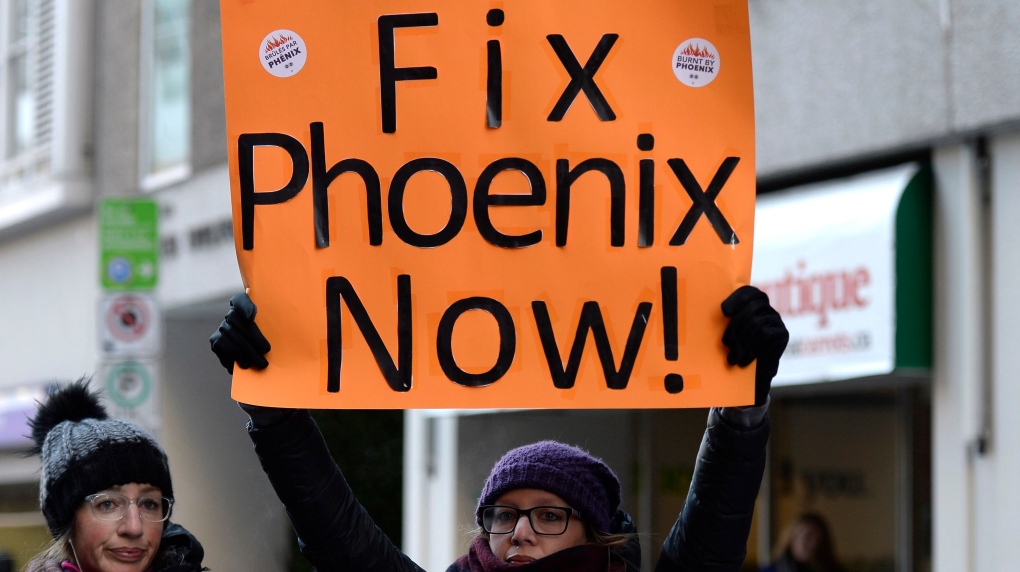 Members of the Public Service Alliance of Canada affected by the Phoenix Pay System rally on Laurier Avenue, during a protest on the three year anniversary of the launch of the pay system, in Ottawa on Thursday, Feb. 28, 2019. THE CANADIAN PRESS/Justin Tang

OTTAWA -- It's been four years to the day that the disastrous Phoenix pay system launched.

In the time since, hundreds of thousands of federal public servants have struggled with issues that continued to mount. Some were paid too little, others were paid too much, and still more were not paid at all.

“I’ve had to take [on] a second job just to pay the bills because I was underpaid," said Jean-Nicolas Cyr. “My wife was affected as well. She was the one with no payment at all and then repayment issues...I’ve worked hard for promotions and basically I haven’t been paid for them in the last four years.”

To mark this day, one of the unions representing federal public servants in the National Capital Region took their message straight to the Prime Minister's Office.

Members and leaders of the Public Service Alliance of Canada for the National Capital Region (PSAC-NCR) held a rally outside Justin Trudeau's office on Wellington Street Friday morning with members who have been directly affected told their stories.

The union says their members are fighting for a fair contract and equal compensation for workers affected by Phoenix.

"It’s been four years, and every day our members continue to suffer – from mental health issues and physical stress to losing their homes or ruining their credit. The government’s offer of five days of leave is disrespectful," said National Executive Vice-President Magali Picard in a news release. "This is why we continue to fight for justice. We want equal and fair compensation for members,"

A contract offer by the government included an extra five days of paid leave (or a cash payout for former employees) as a form of compensation for workers affected by Phoenix. An agreement was signed by some unions in 2019 but PSAC rejected it.

The union is calling on the Trudeau government to deliver a clear plan and a clear timeline to eliminate the backlog of Phoenix cases and to hire more workers to reduce the number of new cases that spring up every day. They also want the government to renew a retention deal for pay workers, which expired last summer.

Earlier this month, the government said the backlog of cases dropped below 200,000 for the first time since the system launched, but nearly half of all federal employees paid through Phoenix were still having issues.