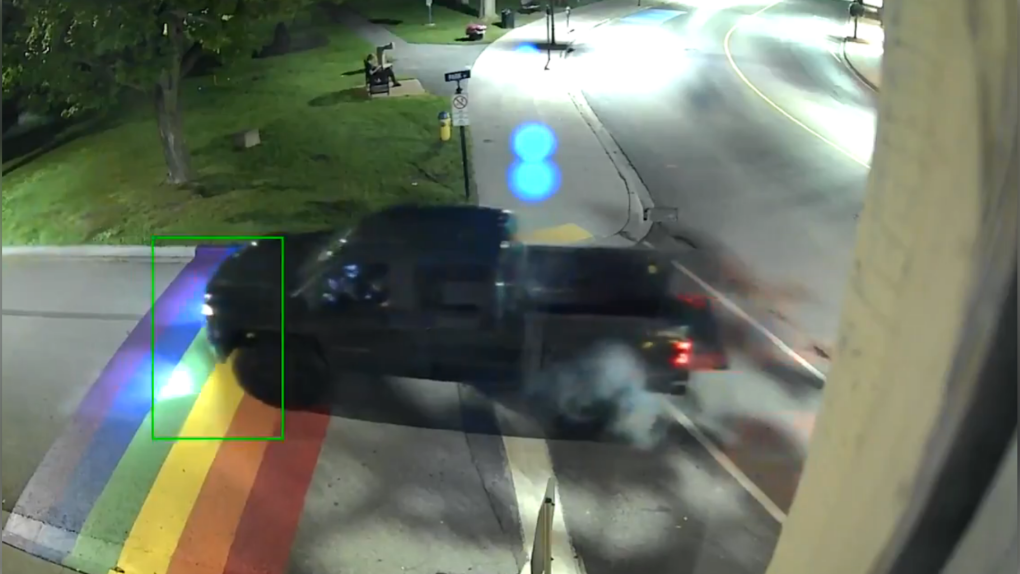 GANANOQUE, ONT. -- Gananonque police are asking for the public's help identifying a driver who damaged a rainbow crosswalk overnight.

In a news release, police said a driver "intentionally conducted a break-stand and burn-out" over the painted Pride flag on Park Street at King Street East at around 3 a.m. Monday.

"The vehicle appears to be a dark colored, newer Chevrolet Silverado with custom tires and black aftermarket rims," the police service said.

A video of the incident was shared by Gananoque police on their social media channels.

Police are also looking to speak to the witness who can be seen sitting on a bench nearby at the time of the incident.

Anyone with information is asked to contact the Gananoque Police at 613-382-4509.

Just after 3 a.m. on Monday, August 2, 2021, a driver intentionally conducted a break-stand and burn-out over the painted Pride flag, located on Park Street at King Street East. pic.twitter.com/g93U4RZih7

Second report of damage in a week

This is the second time in just over a week that Gananoque police have reported damage to this particular crossing.

Last week, police said they had received several reports on July 23 of a male driver intentionally driving his truck onto the same Pride flag on the road and spinning his tires with the intent to cause damage. The driver was found a short time later and was charged under the Highway Traffic Act for stunt driving, according to a press release.

The 56-year-old man from Leeds and the Thousand Islands was also charged under the Criminal Code with Mischief Under $5000.