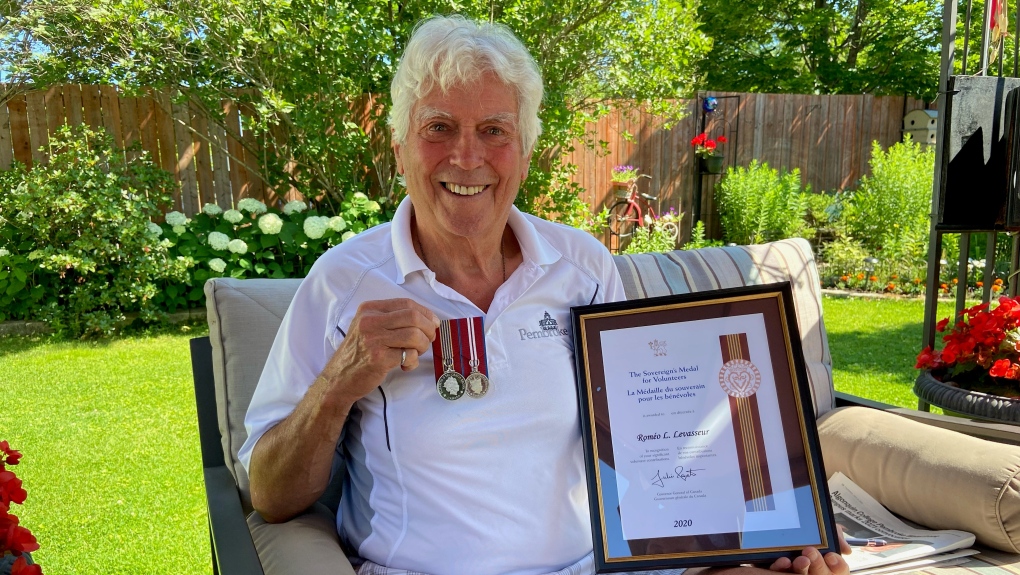 PEMBROKE, ONT. -- Romeo Levasseur has dedicated his entire life to his community of Pembroke, and he has now been bestowed with the highest honour a volunteer can be awarded in Canada, the Sovereign’s Medallion.

The accolade is awarded to any living Canadian who has made significant, sustained, and unpaid contributions to their community in Canada.

“When I got it, there was a lot of warm fuzzies,” the 81-year-old said, describing the feeling of receiving the Sovereign’s Medal for Volunteers. “It was a humbling experience in spite of the fact that you’ve been involved in so many things.”

Levasseur is now retired, but says he still dedicates up to 30 hours a week volunteering in his community. He is currently active with the Pembroke Legion, Pembroke’s planning advisory committee, the Knights of Columbus, and his local church. Levasseur also gave his time to the Kinsmen Club, the Rotary Club, and Pembroke’s fiddle and step dancing planning committee. One of his proudest memories is that of his time at Family and Children’s Services, where he helped start the first Kumon literacy and numeracy program in Ontario.

“He is one of the main cogs, he is,” says Stan Halliday, president of the Pembroke Legion and Levasseur’s lifelong friend. “And there’s no doubt [other members] do lots of work, but he’s always there when we need him.”

“I’ve been a life long learner,” says the award-winning volunteer. “So, if you have the opportunity to learn something new, or about someone,” Levasseur says he usually tries to take it. “Some of [the opportunities] I went after in order to be able to broaden my knowledge. Some of it, of course, I’ve had to unfortunately say no, I’ve got enough on my plate.”

“That’s the type of individual he is, and still doing it today,” says Pembroke Mayor Michael LeMay. The Sovereign’s Medal for Volunteers is usually presented by the Governor General, but due to the pandemic, LeMay was given the privilege of presenting the award to his long-time resident.

“In the case of Romeo, it was very well deserved. And I think it was an honour for me to present the medallion to him,” says LeMay. “It is definitely a feel good stamp because we know it is the highest volunteer honour that can be awarded to a Canadian.”

While the medal is a great recognition of Levasseur’s commitment, he doesn’t do it for the awards.

“It’s not greater than the satisfaction of seeing the smile in peoples’ eyes or on their lips when you’ve done something.”

Levasseur turns 82 next month and says he doesn’t plan on stopping anytime soon.

“As along as I’m able to think and as long as I can stave off physical impairment, then I will continue.”