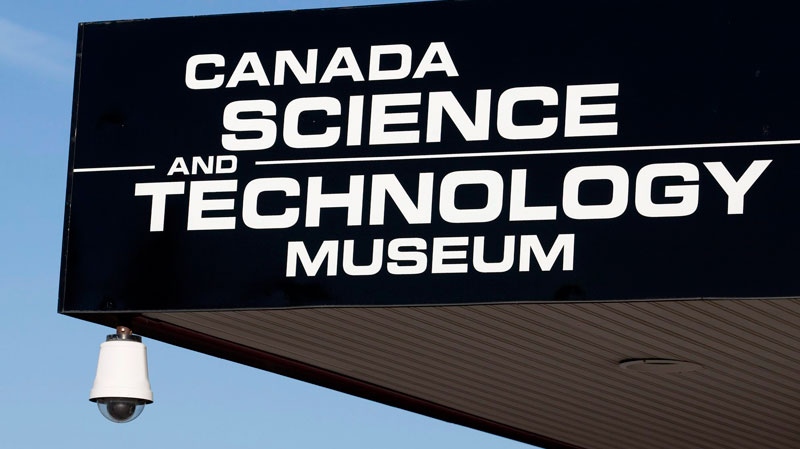 The sign for the Canada Science and Technology museum in Ottawa is seen on Friday, November 12, 2010. (Pawel Dwulit / THE CANADIAN PRESS)

OTTAWA -- The technology used in the field of medicine has grown by leaps and bounds over the past century, but when the Canada Science and Technology Museum reopens in Ottawa next month, a new exhibit in the 7,400-square-metre space will be asking visitors to imagine the future while getting back to basics: sight, sound, touch, smell and even taste.

The idea for "Medical Sensations" came from a previously planned exhibit focused on medical imaging that the museum had on the books when mould and a leaky roof forced the tourist attraction to shut down three years ago, says Christina Tessier, director general of the museum.

As they thought about expanding the medical imaging exhibit for the grand reopening, Tessier says they decided to go beyond sight to incorporate all the other senses physicians use to diagnose and treat patients -- with the added bonus being that it's also a great way to explore a museum.

"That aspect of our five senses is very approachable and accessible for the audience for understanding medical technology and also it allows us to look fully at that whole spectrum of medical treatment and diagnosis," says Tessier.

Here's a rundown of the sense-based approach to the new exhibit:

The tour begins with a collection of stethoscopes, including a replica of the first one, invented in 1816. David Pantalony, curator of the new exhibit, says there is a bit of a debate over whether the iconic medical instrument is really necessary anymore. Still, he notes that for much of the world, it remains an important diagnostic device, especially in the developing world.

"There's a lot of physicians worldwide who say this is still one of the most powerful, simple, elegant ways to learn about the body," says Pantalony.

Other attractions in the sound section of the exhibit include buttons to listen to different kinds of coughs and a 1940s vinyl recording of a heartbeat, with the Glenn Miller Orchestra on the other side of the record. The exhibit also explores the more abstract aspect of sound in health care -- that of listening. It includes a profile of Dr. Lisa Monkman, an Anishinaabe physician in Manitoba, who describes listening to the stories of her patients and their entire communities.

The sense of sight is as important to the medical profession now as it was centuries ago, but it is explored in different ways as the exhibit hops through time. The section includes a wall of wax models, called moulages, that medical students would have used as a three-dimensional guide to various skin conditions.

"The students would ... look at them like a book," says Pantalony.

Although this is the section on sight, it also includes an element of touch. One of the moulages, depicting a hand spotted with warts, has been 3D printed and mounted on the wall, so that the visually impaired can still interact with the exhibit. On the other end of the technological spectrum is an interactive app called Visible Body, a computerized atlas of human anatomy that lets the visitor zoom in and out on everything from eyeballs to the spine.

Believe it or not, doctors used to rely on the senses of taste and smell to help figure out what was ailing their patients -- including when it comes to urine. The museum has a replica of a 16th-century urine wheel, which depicts the different colours, tastes and scents of that bodily secretion and what it would have meant to physicians back in those days. Pantalony says some of the same debates over the use of technology in medicine existed at that time, as some were concerned doctors were relying too heavily on the urine test as a diagnostic tool, rather than using their other senses at the bedside.

One game in this section that will likely be popular with visitors involves manipulating levers to perform fine motor skills-based tasks, much like one would during surgery, using robotic arms. Another involves putting your hand through a curtain to feel a 3D-printed version of an organ. By using only the sense of touch, visitors need to figure out whether they are feeling a brain, a pair of lungs or even an entire skull.

No matter how sophisticated the medical imaging devices of today are, physicians are often required to use more than one sense to diagnose and treat their patients. This is made clear in one section of the exhibit where patients are presented with a simplified version of the simulation doll used in medical schools and given a chance to explore their senses to figure out what is wrong. They can smell the breath, look into the eyes, listen to the heartbeat, or feel a rash on the skin.

"This is really the art of the practice of medicine, bringing it all together," says Pantalony.

Admission for adults is $17, seniors and students pay $13, a ticket for kids ages three to 17 is $11, while children two and under get in for free.

There is also a discounted family pass and free admission for members, while anyone can check out the museum for free daily between 4 p.m. and 5 p.m.