Ottawa's annual Labour Day Parade gets back on the streets

OTTAWA -- Ottawa’s annual Labour Day Parade is an event that brings thousands of people from all over the city together to celebrate.

The parade and picnic is something that many look forward to each year and although the picnic couldn’t happen this year, the parade is still a special time for workers and their families.

“It’s workers coming together to celebrate all their hard work,” says Sean McKenny, the president of the Ottawa and District Labour Council. “If the pandemic showed us anything, it’s how important and essential all workers are. No matter what you’re doing—whether you’re working in that grocery store, whether you’re pumping gas at a gas station—every worker is important.”

Last year, the Ottawa and District Labour Council held a virtual parade that many watched online. Being back in person for 2021 was a welcome change.

“This year, workers wanted to do something,” says McKenny. “And we felt that the safest way to do that is if we wear masks and we practice social distancing.”

David Reynolds is a stagehand with the International Alliance of Theatrical Stage Employees. He says this past year has been the toughest in his professional career.

The pandemic has caused him to lose almost all of his work since there hasn’t been any concerts or shows for the past 18 months.

This parade gave Reynolds something to look forward to.

“It’s great to see so many people out supporting workers again,” Reynolds said. “I did do the virtual event last year. It was sort of odd. I was sitting in my shorts on my couch watching it and supporting it as best I could, but it doesn’t feel the same as today. It’s really great to be out and have everyone around you again in solidarity.”

Ottawa Mayor Jim Watson thanked workers on this Labour Day with a tweet.

“Happy Labour Day to all and a special thank you to all our front line workers who have been true heroes working in very challenging times during the pandemic,” the mayor wrote.

This past year hasn’t been easy for many workers. Some lost their jobs completely, while others were pushed to the limits on the front line.

President of the Canadian Labour Congress, Bea Bruske, says this parade reminds workers about the significance they have in the workforce.

“It’s a day for workers and for all of us to kind of take stock of where we are at, how we value workers in our society, and the contributions that we make,” says Bruske. “The significance, really, is for us to come together and celebrate the wins that we’ve achieved, but also to remind ourselves of what we still need to accomplish. And to re-energize ourselves; to re-engage with one another.” 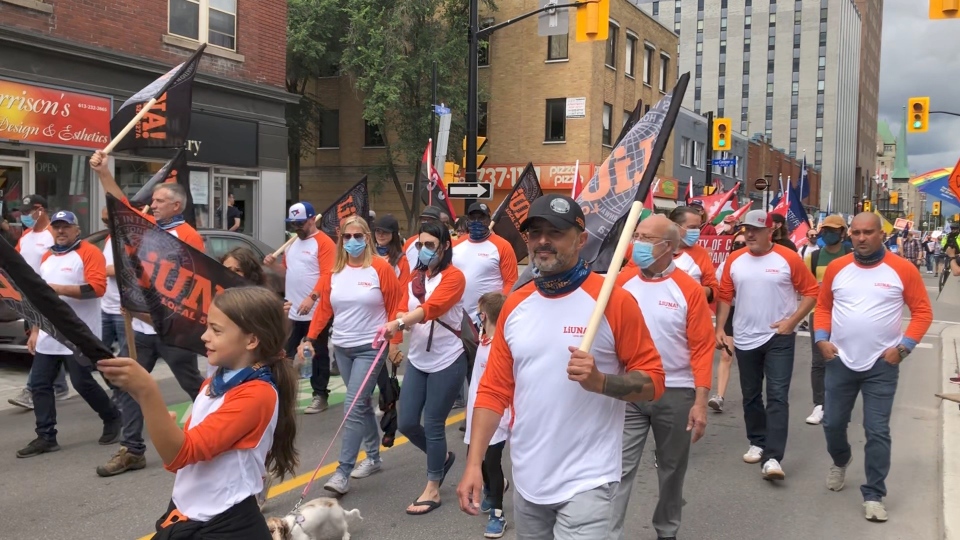 The Ottawa and District Labour Council says, overall, the day is a time to reflect on the progress they’ve made. And although it is a day of celebration, there is still work that needs to be done.

“We’re very pleased that we’re out here together,” says McKenny. “Socially distanced together. Again, coming together with the message that workers are the recovery.”