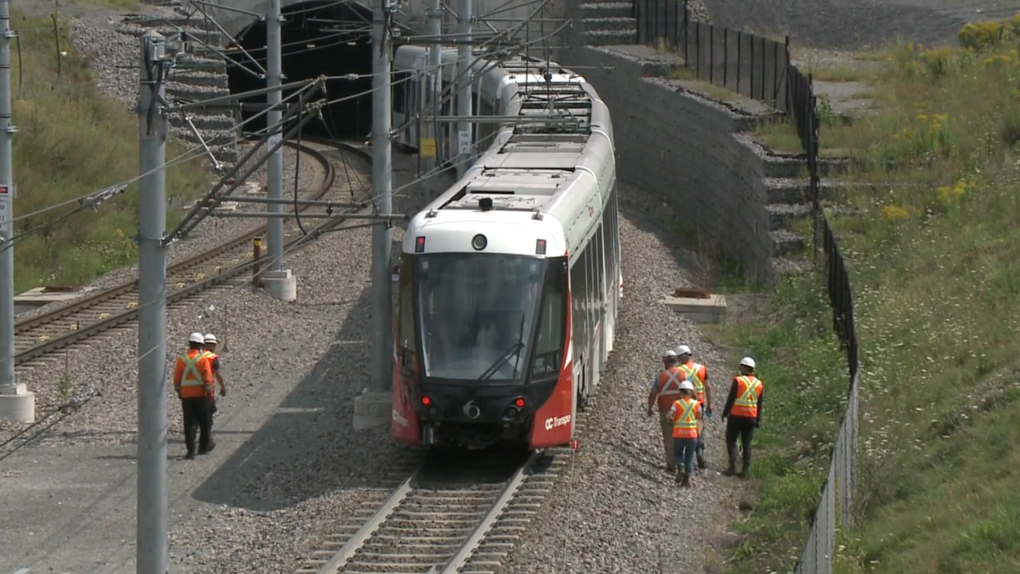 Crews moving an LRT train slowly along the track after a minor derailment earlier in the week. Aug. 11, 2021. (Jim O'Grady / CTV News Ottawa)

OC Transpo General Manager John Manconi provided an update on the investigation into the derailment of a car on the Confederation Line on Aug. 8, and the inspections of all 39 O-Train cars.

"This morning, the city was advised by (Rideau Transit Maintenance) that a ninth single-car vehicle will require additional analysis of the axle assembly, prior to re-entering service," writes Manconi.

"RTM has begun implementing the necessary repairs to the nine cars. We anticipate that this work may continue throughout the coming week. As work on each train car is finished and as on-going inspections are done, they will be returned to service."

Manconi stresses that all vehicles that are in service have "passed the safety inspection process."

The O-Train was shut down on Aug. 8 after an axle became dislodged from the track. The Transportation Safety Board said it was told one of the train's wheels derailed while crossing the track.

Manconi told council last week the investigation identified a problem in the axle bearing assembly as the root cause of the issue. He said a bolt in the sealed axle bearing moved a small amount, damaging the bearing inside the unit and wheel and causing the axle to come off the track.

A memo on Monday said that eight cars did not meet established thresholds when tests and will require repairs.

"These four trains will have components of the axle assembly replaced before they are put into service and they will be subject to the same ongoing inspection requirements as the rest of the fleet," said the memo on Monday from Manconi.

On Wednesday, Manconi said Rideau Transit Maintenance has inspected 37 of the 39 individual cars in the O-Train fleet. Of the two cars not inspected, one is the vehicle involved in the derailment and the other has been undergoing other maintenance.

"The root cause investigation is ongoing at this time and will continue for some time. A fulsome update on this investigation will be presented at the Transit Commission meeting on September 20," said Manconi.

On Monday, Coun. Diane Deans and Catherine McKenney called for an emergency Transit Commission meeting to discuss the "ongoing questions about the safety and reliability of our trains and buses."  Transit Commission Chair Allan Hubley denied the request.

Eleven trains were in service on the Confederation Line on Wednesday, with trains running every five minutes.